Review: Crave Excels with a Street Food Sensibility — and the Phatada

When Dave Holman approached his friend Chris Ayala with a germ of the idea for what would become Crave, he had one important question: Did Ayala know anything about food trucks?

Unbeknownst to Holman, asking Ayala if he knew anything about food trucks was like asking a fish if it knows anything about water. For as long as Ayala can remember — and even farther back than that — the chef has lived, breathed and eaten the food truck business.

Born in Mexico City into a family of taqueria proprietors, Ayala moved with his parents to Los Angeles when he was just six months old. His dad needed a way to support his young family, and with his little boy in tow, Papa Ayala converted an old bread truck into a roving taqueria, welding scraps of sheet metal he'd scavenged and running gas lines for the kitchen equipment himself. He soon made a name for himself in the food truck community, building vehicles for other aspiring business owners.

But though he was good at the mechanical side of the business, Ayala's father was most passionate about cooking. He and Ayala's mother would pack up their infant son early in the morning and bring him with them as they peddled their wares. His dad even built a little cot for the boy in the back of the truck so he'd have a place to sleep when his parents' shift dragged into the night.

With such an upbringing, there was no way Ayala could escape being a chef. Though he initially pursued a degree in marketing, it wasn't long before he quit the program in favor of culinary school. Ayala attended Le Cordon Bleu in Chicago, but he says his biggest education came working in the kitchens of immigrants from Greece and China. Along with his knowledge of Mexican cuisine, it gave his cooking an international perspective.

Ayala moved to St. Louis and worked at the Scottish Arms and the Shaved Duck before meeting Holman and working with him on food for his nightclub, Club HG. Holman wanted to open some sort of fast-casual concept, but he wasn't quite sure what exactly it would be. Pondering the idea of bringing a food truck vibe into a brick-and-mortar setting, he and Ayala started to talk — and from there, the globe-trotting, street-food-inspired Crave was born.

The partners secured the space at Jefferson and Washington that used to house the burger and sandwich joint the Bee, and gave it a cool, urban look. The restaurant is divided into two small rooms: one for the order counter and the other filled with simple tables, chairs and foosball. Holman's background is in graphics, and his artistic eye is responsible for the look of the restaurant: Black and white photographs of Manhattan for the wallpaper, contrasting red paint for an accent wall, exposed brick and modern red-hued lanterns. Street signs with irreverent sayings like "Get in My Belly" and "The Munchies" hang on one of the walls.

Speaking of the munchies, you might think you'd have to be high to enjoy Crave based on a quick read of its menu. The restaurant's signature dish, after all, is a deep-fried burrito called a "Phatada." But I'd argue that you'll instead want to be sober, so as to grasp the nuances that make this creation a welcome addition to the hand-held foods universe. Ayala likens the Phatada to a chimichanga, though he notes that the latter is typically filled with generic ingredients. His version comes stuffed with interesting flavor combinations, like the adobo chicken marinated in a wonderful soy and vinegar concoction and paired with tender Spanish rice, sautéed bell peppers and onions, cheese and avocado-lime crema.

I was shocked that a fast-casual place could pull off baked salmon in a wrap, but Crave's Phatada version had me eating my words. The delicate fish was cooked to a perfect medium and accented with whipped feta cheese, spinach, roasted red peppers and ancient grain pilaf. The flavor combinations are something you'd expect on a formal plate — not tucked into a flatbread and wrapped in paper. 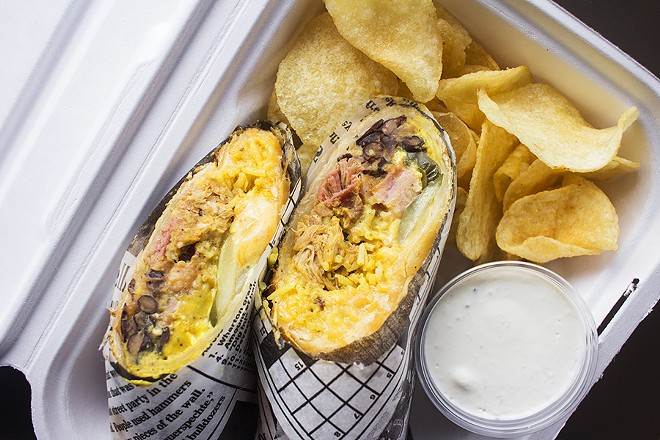 For the "STL Philly Phatada," Ayala uses juicy sliced steak, peppers, onions, cheese and ancient grain pilaf for a fun riff on a Philly cheesesteak. And it may sound difficult to improve on a Cubano, but Crave's "Cubano Phatada" may be the best version of the classic sandwich I've had in St. Louis. Pulled pork, thick hunks of ham, Swiss, Chihuahua and cheddar cheeses, Spanish rice, black beans, pickles and mustard combine for a magnificent wrap.

The beauty of the Phatada, however, is not just on the inside. What makes the dish is the wrap itself: a thin, flour-based Indian flatbread that puffs up from the addition of baking soda. The result is a delicious, flaky shell that Ayala describes as a cross between an Indian puff pastry and a tortilla. I describe it as the perfect vehicle for handheld cuisine.

The same flatbread serves as the base for a variety of Crave's quesadillas. The barbecue pork version drips with smoky meat, a tangy tomato-heavy barbecue sauce and oozing Chihuahua and cheddar cheeses. The flavors are outstanding, though it's so messy, I wouldn't order it on a first date. Even a simple bean and cheese quesadilla benefits from the blend of cheeses and that wonderful flatbread, though that goo factor still cannot be contained — not that you'd want it to be.

Crave is at its best with the Phatadas and quesadilla; some of the other categories of dishes still need work. The "Hot Buttered Popcorn Chicken," miniature spheres of spicy chicken fritters dipped in Nashville style chili oil, had heat but lacked dimension. The clarified butter dipping sauce added nothing but decadence. It just didn't pop.

The same chicken, minus the chile oil, is also paired with pancakes for a take on chicken and waffles. My biggest issue with this dish — as well as an order of standalone pancakes — is the presentation. Everything at Crave, besides the Phatadas and quesadillas, is served in a paper soup cup with a lid. In hot dishes it traps the steam, causing whatever is in the cups — in this case, pancakes — to go limp. Perhaps a different serving vessel would have saved these items.

The jerk shrimp poke cup was also served in a paper cup, but steam wasn't the problem here: It was simply packed a bit too tightly, making it difficult to incorporate all the flavors. And that's a shame, because the mix of spicy shellfish, grilled pineapple, yuzu-glazed carrots and rice proved a delightful combination of sweet, salt and spice. Freed up in a larger bowl, this would be an infinitely better offering.

Ayala is quick to refer to Crave as a work in progress, and based on our conversation after my visits, I've gleaned he is in the process of expanding hours (the vision is to be open late-night; they are transitioning to a 1 a.m. close time on Fridays and Saturdays) and making tweaks to the menu. That explains why the restaurant was either no longer serving or out of several things I'd tried to order (one day, they were out of potatoes, eliminating the chance to try any of the breakfast offerings, fish and chips, or cheesy potato bites). I must admit, I'm saddened I'll never know what a Doritos' crusted cheese stick or a cream-cheese-filled "Wu-Tang Spliff" taste like, but I suppose I'll survive.

And if Crave narrows its focus and doubles down on those wonderful Phatadas and quesadillas, I assume it will too. After all, Ayala has food trucks in his blood — even if this one happens to be in a brick and mortar.