If I were to tell you that Copper Pig is "fine," what would you think? That I had a bad experience? That the food was sub-par? That service was inattentive?

This couldn't be further from the truth, yet I struggle to write the review of this three month-old Southampton restaurant because it was precisely that — fine.

I once read an essay in which the author laments the demise of this adjective, positing that to label something as "fine" in a culture of "that's epic, bro" and "this pasta is literally the worst" is perceived as calling it mediocre. And Copper Pig is certainly not that. Then again, it's not the best restaurant to open this year, or even the great neighborhood place that its quaint South Hampton setting might suggest. It's adequate. It's pretty good. As my friend put it, "I don't know if I'd tell someone they absolutely had to go there, but I'd probably go back."

Owner Nhat Nguyen should feel good about smacking a base hit for his first full-fledged restaurant venture. A bartender by trade, Nguyen most recently operated the bar Urban on South Grand, which closed in 2014 after a nine-year run. He'd always wanted to open a restaurant, and Urban's closure made him serious about executing on his vision.

That vision may seem odd when you first glance at Copper Pig's mix of Asian dishes and down-home American comfort food. Then you listen to Nguyen's explanation, and it makes sense. 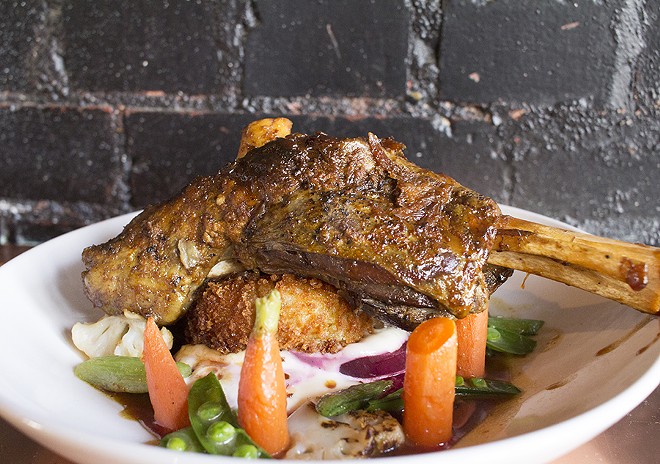 Just like Momofuku's David Chang and LA's Roy Choi, Nguyen grew up as as a first-generation American with Asian immigrant parents — in Nguyen's case, they were of both Vietnamese and Chinese heritage. What he ate was equally divided between the traditional Southeast Asian food served by his family and the fried chicken and burgers he devoured outside of his home. In this sense, the menu is autobiographical, peppered with dishes that have inspired him throughout his life.

And the melting pot that forms Copper Pig has even more influences. The restaurant's chef, Andrew Cisneros, is Peruvian, with a wife from the Philippines, even as Nguyen was profoundly influenced by the food he ate while living in Miami. The result is an eclectic mix — the culinary equivalent of a world music festival taking place, perhaps, in the middle of Nashville.

The space, in fact, is decidedly all-American — so much so that Nguyen admits folks mistake the place for a barbecue joint (he notes that the name may add to the confusion). The restaurant has that classic, south St. Louis rehab aesthetic: exposed brick walls, a wooden beamed ceiling, Edison light bulbs and vintage damask wallpaper the color of gilded moss. The dining room takes up the majority of the space, with wooden tables surrounded by black chairs and a few black leather semi-circle booths. The bar lines one side of the room. 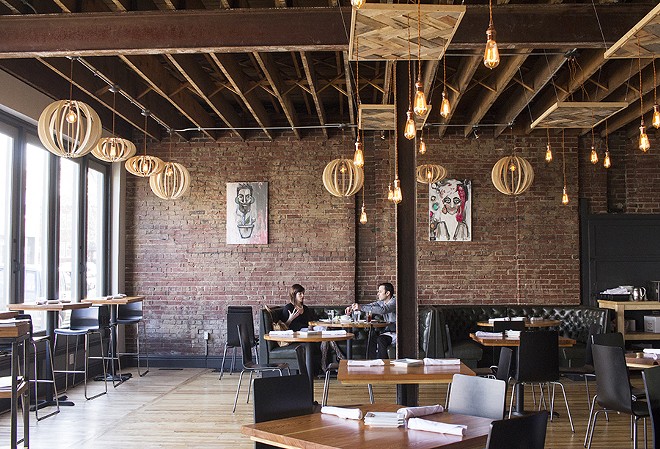 If you walk in expecting a trendy gastropub based on these looks, you're wrong — sort of. The Southern fare is there, including the ubiquitous deviled eggs. Two are traditional in style, whipped with mustard and mayonnaise and topped with bacon. Korean hot sauce and pickled daikon, however, nudge the other two eggs past traditional American picnic fare. I just wished both selections were creamier.

The beet fries, however, were the standout appetizer. Their texture could not have been more perfect — the root vegetables are cut into thick slices, roasted so that they just soften a touch, lightly dusted in cornstarch and fried for a hint of crunch. Mild, whipped goat cheese, sprinkled with scallions, serves as an addictive dip. This dish alone is worth a visit.

Copper Pig's take on the chicken wing has its merits. They are frenched like a lamb lollipop, so that the meat and gristle are removed from the narrow part of the drummy. This is great for ease of eating but seems to result in less meat. The crispy breading is glazed in sweet chili sauce that would be excellent if it had any spice. As it stands, the flavor was one-dimensional.

Entrees depart from the Southern-influenced fare, turning toward Asian and Latin American influences. On both of my visits, Copper Pig offered two different versions of tacos. The shrimp version, dressed with creamy fish sauce aioli, made up for the chicken wings' lack of heat with a fiery wallop. The whole thing had an easy vibe, like a Baja fish taco, until I encountered one of the burn-your-mouth-off Serrano peppers. The spice enlivened the fried shrimp, even if it induced hiccups.

The avocado tacos are as mild as the shrimp are spicy, but they were no less interesting. Hunks of avocado are breaded in panko and lightly fried, creating a warm, creamy texture reminiscent of flash-fried goat cheese. They were good, though they could have been great were it not for the overdressed Thai chili cabbage slaw.

I was underwhelmed with the "Three Little Pigs" sandwich. A panko-coated pork cutlet is topped with bacon, ham, brie and an over-easy egg — a concoction that sounds decadent but that lacks the ooze factor I'd anticipated. The "hot/sweet" relish did little to elevate the dish past ho-hum.

Similarly, I found the bibimbap bowl to lack the oomph found in better versions of this Korean classic. The garlic rice wasn't garlicky, the egg was overdone and the bulgolgi beef was chewy. All the right components were there, and it looked nice enough, but it felt like something you'd find at Panera. 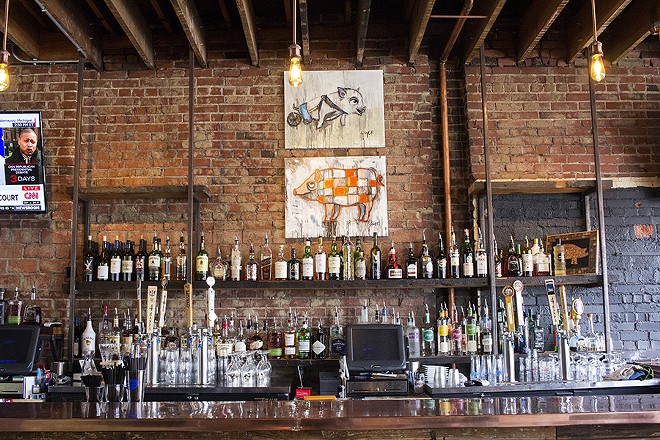 On a different night, another taste of bulgolgi revealed a different problem: too much salt. This time, the meat was moist and tender, served on a garlic baguette with kimchi, apples and cheddar cheese for a Korean-inflected cheesesteak. Too much meat had been piled on crumbly bread, though, which made it impossible to eat without the aid of a knife and fork. The sandwich was the right idea; it just had execution problems.

The lamb shank, however, was darn near flawless. Braised meat, spiced in the style of North Africa, fell away from the bone into a small pool of its cooking juices. A creamy fried risotto cake was the perfect tool for scooping up this savory treat.

I was equally impressed with the fried snapper. The whole fish is lightly fried and dressed with fried sweet plantains, tangy soffrito rice and tamarind paste — as if Cisneros is writing a love song to his Latin American roots. This dish, coupled with a level of hospitality usually reserved for more expensive restaurants, tips the scales in Copper Pig's favor.

(I must disclaim: I'm certain that Nguyen and his team knew I was reviewing the restaurant on my second visit but not on my first. I had near-identical experiences on both occasions.)

In other words, they encapsulate Copper Pig. It's not setting the world on fire, but it's a fine restaurant nonetheless. Isn't it about time we stop thinking of that as a pejorative?