Review: Byrd & Barrel Does Fried Chicken with a Dose of Irony

A painting hangs on one of the walls in Byrd & Barrel's tiny dining room, depicting an epic battle between man and chicken. It's a dystopian futuristic scene, as giant, brawny birds, heavily armed and decked in space suits, engage in a standoff with military-clad humans — and the chickens are clearly winning.

I can't help but see Byrd & Barrel owner Bob Brazell as one of those chickens. After spending a year and a half as executive chef at Revel Kitchen (formerly Athlete Eats), his new venture seems less like a change in direction and more like the kind of culinary meltdown that comes after months cooking for gluten-free paleo types and house-brewing kombucha. Cauli-rice? I've got it right here, mother clucker! 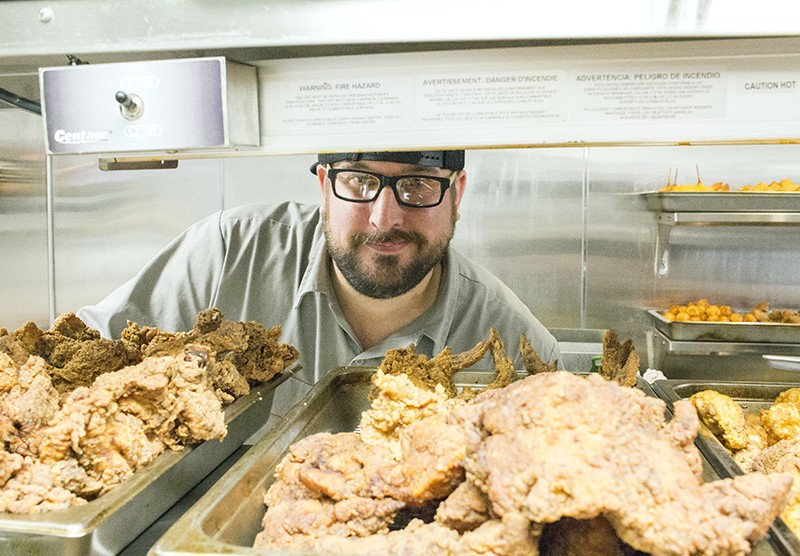 Brazell insists this is not the case. As he came up in some of the city's top kitchens over the years (Monarch, Niche), the St. Louis native dreamt of a place of his own — a casual comfort-food spot, or in his words, the type of food that people want to eat. That dream found its reality when the Popeyes near the corner of Jefferson and Cherokee became available. Brazell left Revel Kitchen in August 2014 and got to work repurposing the former fast-food restaurant into a homegrown homage to the fried bird. After what seemed like an eternity to those eagerly awaiting a taste, Byrd & Barrel opened its doors in September.

As befitting a former Popeyes, Byrd & Barrel has a tiny interior, with just three banquettes and a handful of stools around a narrow wall counter. The bar sits in place of the original order counter and takes up the bulk of the restaurant's real estate. 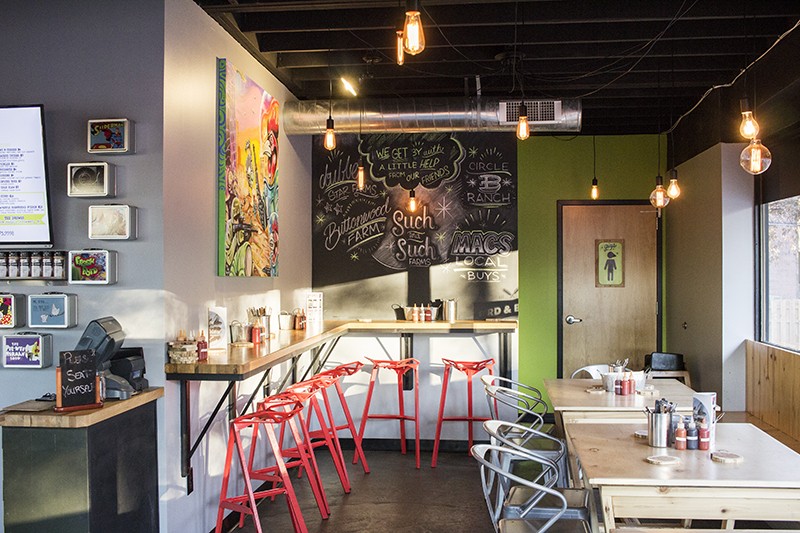 The space, though, is utterly transformed. Walls are painted black with green accents, and windows stretch around three sides of the building. Out front, barrels from 4 Hands Brewing Co. section off a large part of the parking lot, creating a surprisingly inviting patio, while Brazell has retained Popeyes drive-through window so that passersby can grab their chicken on the quick. Then there's the black-painted toilet, repurposed as an ashtray, that sits outside within full view of the dining room — perhaps a middle finger to culinary political correctness à la Duchamp?

Actually, it seems more like an expression of south-city hipster irony, as does much of Byrd & Barrel's menu. A clever coworker calls it "boho-faux-hobo" — it's basically a tongue-in-cheek appropriation of white-trash culture, dialed up to the point that we know Brazell is in on the joke and not just serving, well, Popeyes. 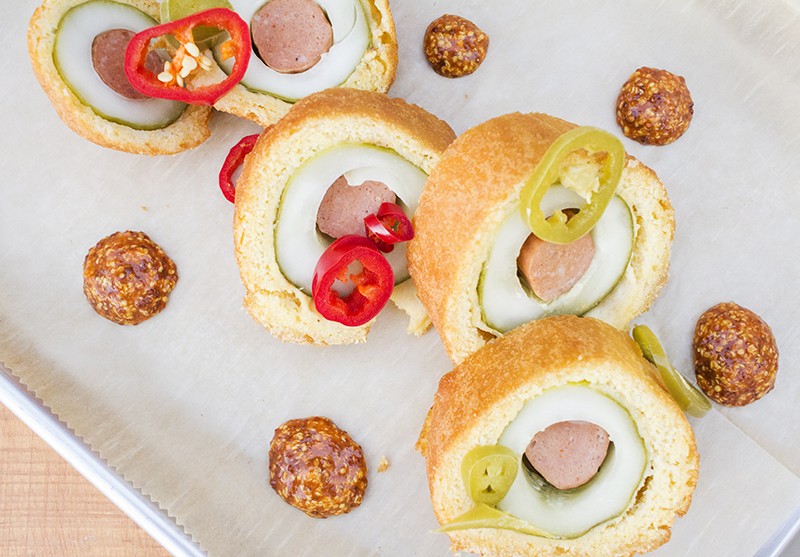 One need only consider the restaurant's signature sandwich, the "Mother Clucker," to see Brazell's penchant for trashy-chic. A gargantuan piece of boneless fried chicken is placed on a sesame bun, then coated with molten Provel cheese sauce (think albino Cheez-Whiz), caramelized onions and pepper jelly. And he doesn't stop there — to kick the sandwich up to eleven, Brazell garnishes the bird with Red Hot Riplets potato chips. Unless you are looking for excess, the chips and Provel are unnecessary, transforming a flavorful chicken sandwich into a novelty — but that's exactly what Brazell is going for.

The "Tickled Pickle," on the other hand, is a novelty that turns out to be legitimately good. Brazell hollows out a gargantuan dill pickle, stuffs it with a hot dog, coats it in cornmeal batter and dunks it in the deep-fryer. This edible phallic symbol is then given the presentation one would expect at a fine-dining establishment: sliced into equal discs and fanned out on a plate that is decorated with spiced mustard and hot peppers. It's ironic, yes, but also delicious: The acid from the dill pickle cuts through the richness of the hot dog and cornbread, resulting in a shockingly well-balanced, enjoyable dish. 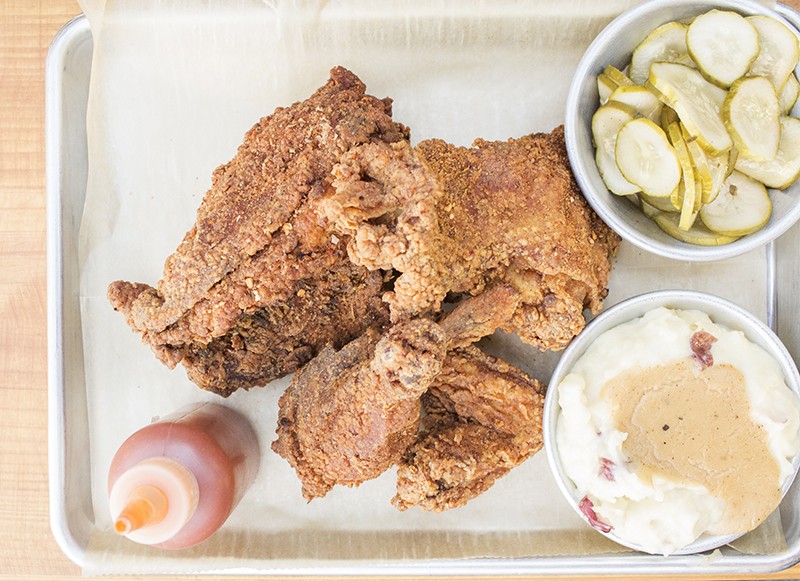 Byrd & Barrel shines brightest on its signature offering, the fried chicken. Brazell soaks the bird in a seasoned buttermilk brine for three to four days, coats it in heavy batter and cooks it in a pressure fryer. The dark-brown breading is thick and crunchy, generously flecked with chile flakes, and subtly sweet; it's like Nashville hot chicken, only dehydrated into a dry rub. The breading surrounds searing hot and juicy meat, which comes either as a traditional bone-in, skin-on fried half-bird or as handmade white- or dark-meat nuggets. Both are standouts, even in this city's close-to-oversaturated fried-chicken market.

Chicken wings also benefit from a similarly seasoned dry rub. Unfortunately they were overly smoky, which prevented the other flavors from shining through. The "South Side Poutine" appetizer had the same problem — pulled smoked chicken smothered in smoked mushroom gravy made me feel like I was eating the delicate, cheese-curd-topped potato croquettes in front of a roaring campfire.

Byrd & Barrel offers a handful of more upscale entrées — a way for Brazell to remind us that his talent goes beyond fried chicken and beer. The "Chicken and the Egg" is the lovechild of chicken and dumplings and pasta carbonara. Creamy gnudi, or ricotta dumplings, are smothered in chicken-thigh confit and cubes of bacon, then drizzled with raw egg yolk. The heat from the gnudi and chicken cooks the egg yolk, transforming it into a rich glaze. Basil-chile flakes give a small hint of spice to this decadent plate.

Brazell's take on curry would be at home on any Thai restaurant menu in town. Instead of rice, he tosses barley risotto in fiery, lemongrass-scented red curry and accents it with spiced cauliflower, carrots, cashew pieces and small versions of the restaurant's chicken nuggets. It's a worthy entrée if you can handle dining with beads of sweat on your forehead.

At its heart, though, Byrd & Barrel is a fried-chicken and bourbon restaurant. And while this town certainly has enough of those, Brazell doesn't seem to care. He has put in his time in hallowed culinary halls and in the health-food niche, doing his part to fuel clean living. Now it's his moment to give all of us the bird.