PHOTO BY MABEL SUEN Drinks at Brickyard Tavern include the "STL-Style Mary," a beer and the "Tavern Tin Cup."

My friend and I sipped our beers at Brickyard Tavern, quietly eyeing the barely touched bowl of spinach dip that sat in front of us. Finally, she broke the silence.

"I didn't think I'd see the day where I turned down spinach dip," she sighed. "I mean, it's spinach dip, for God's sake. You have to try to make it bad."

I'd concur with her statement. Forget the leafy green that gives spinach dip its name — the gooey concoction is really just an excuse to shovel copious amounts of cream and cheese into your mouth. Making it takes about as much culinary skill as plugging in a Crock Pot and watching a twenty-second Facebook how-to video.

Brickyard Tavern's attempt was certainly instructional; it served as a demonstration of what not to do. Freezer-burned spinach, sparse cream, crusty cheese browning on the top, no seasoning — it was a sad approximation of the appetizer classic, and one that unfortunately served as a precursor for the rest of the meal. 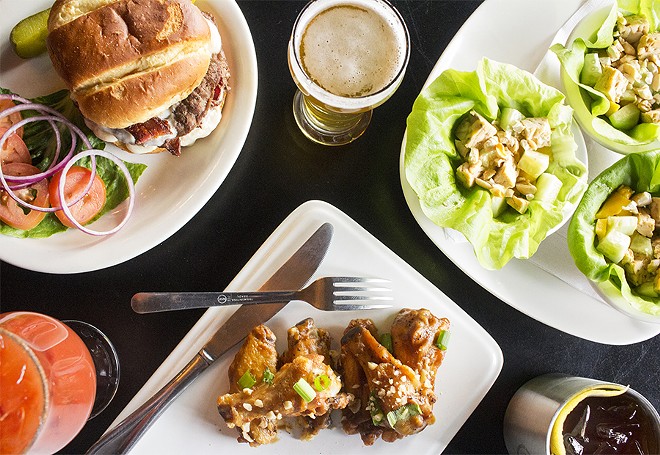 Even though the execution failed on nearly every dish at this two-month-old South Grand bar, the folks behind Brickyard Tavern deserve credit for their attempt at reinvention. Until three months ago, owners Robin Schubert, Staci Stift and Joe Thele operated the space as Absolutli Goosed, a martini bar that had been serving cosmopolitans since Carrie Bradshaw made them a thing. Back when they opened in 2002, you could order flavored raspberry vodkas and "Flirtinis" without shame. By 2015, a year in which housemade shrubs dominated craft cocktail menus, the concept was more than dated.

Schubert, Stift and Thele understood this but did not want to close up shop. Instead, they reimagined the space as a low-key neighborhood bar where locals could grab a beer and a bite to eat. They named the new concept Brickyard Tavern as an homage to the city's brick-making industry in the 1800s.

Unfortunately, that obscure reference left them with a name that sounds all too similar to the national chain of "breastaurants" called Brick House Tavern. And the bar's new look isn't much better.

Gone are Absolutli Goosed's red walls and modern artwork, replaced by a black paint job, a brick mural, some dart boards and several televisions. It's a cold, generic-looking set-up that was made worse thanks to snafus with the background music. On both of my visits, awkwardly long pauses (several minutes long) fell in between nearly every song, sucking all of the energy out of the room. 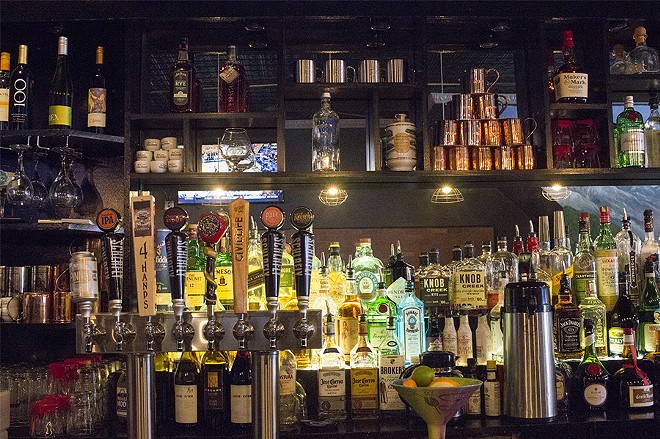 The food on my two visits did little to revive the scene. The menu is the brainchild of Pittsburgh native John Homer who, to be fair, is placed in the unenviable position of trying to create bar food without the aid of a grill or a deep-fryer. As such, the menu tends toward the kind of heat-and-serve fare you'd cook in your dorm room.

"Buffalo Balls," an attempt at boneless Buffalo wings, were (allegedly) chicken meatballs, but they were so pasty I couldn't tell if they'd been overly breadcrumbed or just overworked. The generous glaze of hot sauce and a few blue cheese crumbles did little to mask the meatballs' inadequacy.

Whole chicken wings are available dressed with Buffalo, barbecue or "steakhouse" sauces. Our server highly recommended the steakhouse, insisting it was as if the Buffalo and barbecue sauces had a baby. It was more like the result of a drunken one-night stand between cocktail sauce and Heinz 57. To make matters worse, the wings were cold upon arrival, though I doubt even a searing hot platter would have made them palatable.

If you've never smoked pot but want to know what sort of food would result from having the munchies with nothing in your fridge, order Brickyard Tavern's pretzel grilled cheese sliders. In theory, they sound fine enough: Gouda, cheddar and Swiss cheeses melted on a pretzel bun. But then the kitchen had to get unnecessarily creative and slather brown mustard on top, along with French's fried onions. Not that the add-ons obscured a good sandwich — the cheese was sparse, and the bun was stale and dry — but they did nothing to help, either.

Brickyard Tavern has a small selection of ingredient pairings that can be served as either a sandwich, a wrap, a flatbread or "naked." I ordered the "Forest Park Favorite" as a flatbread and was shocked to see a vestige of my youth served atop the crust. A chicken patty, the kind they served in my Catholic grade school cafeteria, was sliced into strips and dressed up with some gooey mint dressing, feta cheese, uncooked spinach and red peppers. At least the soft flatbread crust was decent.

I can't say the same for the other vehicle that incorporated a chicken patty. The chicken-and-waffle sliders were wrong on just about every level. Cloying cinnamon roll waffles were topped with slices of the chickenstuff; the entire enterprise was then covered in a Jim Beam maple syrup icing that was so sweet it made my teeth hurt. Nothing about this was good. 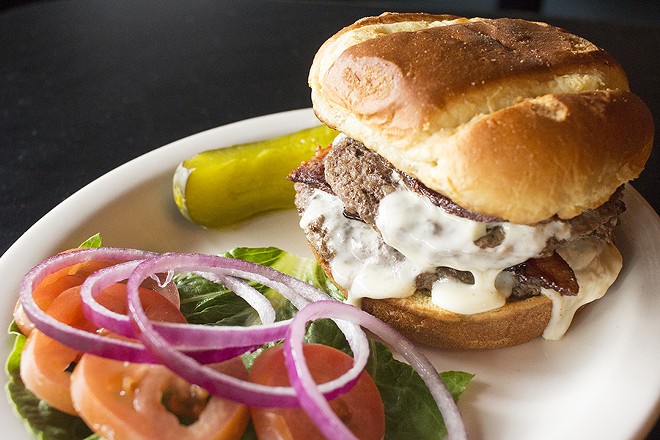 All was not a total loss: There were actually two bright spots on the menu. The "Tower Grove Greek" was a solid wrap sandwich stuffed with red onions, red peppers, feta, avocado, Kalamata olives and balsamic dressing. The pita wrap was toasted and pressed, allowing the cheese to melt and form a satisfyingly gooey dish. And I must give credit where it is due: Brickyard Tavern's burger is damn good. Two juicy patties, perched atop a buttery, soft bun, can be dressed with a variety of toppings. I opted for cheddar, avocado and the tangy mayo, and enjoyed every last bite.

It was such a respectable sandwich that I found myself wondering whether the owners should just cut to the chase and reinvent themselves as a burger bar.

As it turns out, the situation is in flux. I last ate at Brickyard Tavern on February 6. But after completing my review, I learned that big changes were coming to the menu. In a phone conversation this past weekend, Schubert all but admitted that their first attempt at food missed the mark.

"We listened to feedback from our customers and realized we needed to make some changes," she explained. The result is a nearly complete overhaul. Gone are the chicken-and-waffles sliders, the whole wings and the confusing "select a format" style (flatbread, sandwich, naked or salad) that made up the majority of the menu. Schubert hopes this will streamline things, admitting that the way it had been previously designed was difficult to execute.

Clearly, the owners are capable of recognizing that Brickyard Tavern has some major problems. I'm hoping they'll find a solution before it's too late.