PHOTO BY MABEL SUEN The caldeirada do mar, top, with vegetables and rice (left) and plantains.

When you step through Brasilia's creaky front door, you cross more than just a threshold; it's as if you've crossed into a new hemisphere. Behind you, exhaust-spewing busses roar down South Grand, splashing pedestrians with the grey post-snow sludge that seems ever-present in St. Louis from November through March.

Before you, however, Brasilia's lounge is a bossa nova-inflected dream world. Street sounds give way to "The Girl from Ipanema" (yeah, they have that on a loop), while reed-fashioned hammocks hang from the ceiling and a giant mural of Christ the Redeemer takes up an entire wall. After two of Brasilia's stiff caipirinhas, you might be convinced you're viewing the famed statue from a spot on Copacabana Beach.

You can't help but breathe a deep, happy sigh just sitting here, which is exactly the reaction that owners Rachel and Jorge Carvalho are going for. Located in the space that used to house Urban, Brasilia is the husband-and-wife team's third attempt at a Brazilian restaurant in the Gateway City, and they took pains to perfect the scene this time around. Their first venture, Café Brasil in Rock Hill, felt sterile to the pair; the Central West End storefront that held their second, Coco Louco Brasil, was too large to capture the intimate atmosphere they were going for. For Brasilia, Jorge channeled his homesickness for his native country into the design, creating the feel of a rural beachside shack. The cozy bar and larger dining room are painted the green and yellow of the Brazilian flag and dimly lit by candles — a soothing contrast to the bustling street just outside.

When a restaurant makes you feel as if you've just walked out of a 90-minute massage, does it really matter what the food tastes like? I'd argue not as much as at a place with lesser atmospherics. It has to be good enough, though, and that is exactly what Brasilia offers. Remove the cuisine from the scene, and I wouldn't necessarily go back. Give me some decent dishes to snack on while lounging at that bar, and I'm inclined to be a regular. 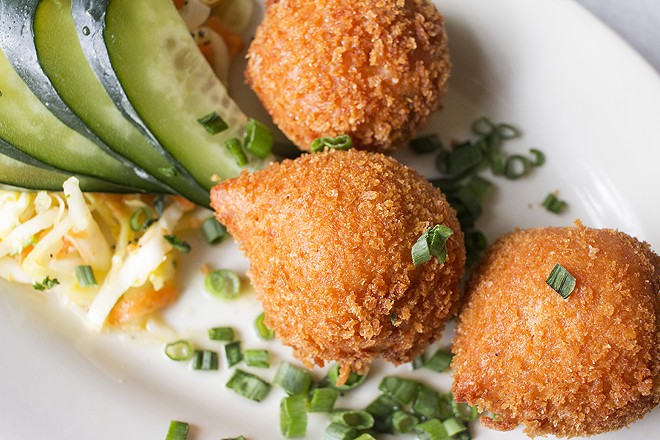 Of those snacks, Brasilia leads strongly with its appetizers. Coxinha, sort of a traditional chicken fritter, tastes like a savory chicken doughnut hole. Minced poultry and herbs are encased in a thick, chicken-accented dough, formed into a ball, battered and deep-fried. It's the ultimate chicken nugget.

A friend tipped me off that Brasilia's wings are worth trying, and she was correct. The miniature drummies present as the kind of unimpressive generic hot wings you'd find at a sports bar. That would be the end of the story save for the mouth-watering dipping sauce served as an accompaniment. In place of the standard ranch or blue cheese, this condiment is a cross between remoulade and smoky Italian vinaigrette. In combination with the wings' cayenne-fueled hot sauce, it's a marvelous blend of flavors. I just wished for larger, better quality wings so I could soak up even more of this savory nectar.

The only thing I wished for from the pastel, however, was a second order. By far, this empanada-like appetizer is my favorite dish at the restaurant. The flaky hand pies come filled with your choice of beef, cheese or chicken. I opted for one each of the first two and was enamored. The beef pastel is overfilled with a mixture of meat and green olives simmered with a touch of tomato sauce, like a South American take on classic Bolognese ragout, while the vegetarian version oozes a blend of provolone and mozzarella, punctuated with oregano. If the coxinha is a haute chicken nugget, this is a luxury version of a Hot Pocket.

For the most part, entrees at Brasilia are good, but I would hesitate to say great. Vatapa de frango pairs a boneless, skinless chicken breast with traditional cashew nut gravy. The interplay between the thyme-heavy sauce and char flavor of the grilled chicken is enjoyable, a taste that's somewhere between a gumbo and the brown gravy your grandma serves over mashed potatoes. Various seafoods — mussels, shrimp, chunks of whitefish — comprise the caldeirada do mar. A delicate coconut milk and palm oil broth that's laden with herbs serves as the base of this delectable fish stew. Unfortunately, the chewiness of the mussels and shrimp kept this from being a standout.

I've had better versions of feijoada, the black bean and meat stew considered Brazil's national dish, but Brasilia's was still decent. As in the caldeirada do mar, the black beans and hearty broth here were rich with the flavor of slow-cooked meat. Some of the cuts, however, undermined the quality of the dish. Mild pork sausage was enjoyable, but the hunks of steak were gristly and overlooked, and the cubes of pork belly were nothing but fat.

Beef acebolado, Brazil's version of skillet steak, is flecked with coarse black peppercorns and served sliced with onions and peppers on a searing hot cast iron skillet. Were you at a restaurant a few thousand miles north of Rio, you'd see this on a menu with different accompaniments under the name "fajitas." The kitchen hit a perfect medium-rare temperature, proving that we're in for a treat should the restaurant move forward with plans for a weekly churrascaria (something Rachel Carvalho insists is coming). I have a slight quibble with plate presentation. Every entree I tried came with the exact same preparation: rice, collard greens and mixed vegetables. It's not bad, per se (the collard greens are tender and well-seasoned), but it gives the dishes the feel of dated banquet fare (think zucchini and squash half moons). And the kitchen's inclination to smother everything other than dessert in an herb garden's worth of cilantro is rage-inducing for the sizable percentage of people, including myself, who detest the stuff. Parsley is fairly neutral. Cilantro is not, and for those of us who are cursed with the gene that makes it unpalatable, it taints everything with the taste of Irish Spring.

But there's a solution to any anger at this herbal encroachment. At Brasilia, if anything bothers you, you can just take a deep breath and a sip of your caipirinha and soak in the surroundings. Whether it's food or a dreary Midwestern winter day, a little cacaçha and Sérgio Mendes make everything better.