Review: Boundary Brings the Excitement Upstairs at the Cheshire Hotel

MABEL SUEN Boundary has more than just good looks going for it -- but those never hurt.

Boundary, the latest concept to occupy the main dining area at the Cheshire Hotel, is an oddity of zoning. Though the outdoor area and the hotel itself are in St. Louis County, once patrons venture through the front doors of the restaurant, they are stepping firmly onto city turf. The arrangement is so bizarre that the Cheshire has to maintain two separate liquor licenses and order its booze from different purveyors to make up for the fact that it straddles different environs. Apparently it's not so easy operating in two different worlds.

As a restaurant, Boundary also navigates two worlds — the hybrid zone of "more than a bar, not quite a formal restaurant" that has come into fashion in recent years. It's a marked change from the space's last incarnation, titled the Restaurant, which served as the hotel's formal dining area from 2012 until this past February. Originally conceived as the flagship eatery of the property following its 2011 renovations, the Restaurant was a well-received and popular spot — on the weekends.

Weekday evenings, however, were a different story. While throngs made their way to the Cheshire's basement every night for the casual, Italian-inflected Basso, led by acclaimed (and now departed) chef Patrick Connolly, the Restaurant languished as a "special occasion" destination. To the property's managers, it appeared that the Restaurant's linear, multi-course format no longer fit how diners want to eat — at least not often enough to pack the dining room on a nightly basis. Last December, they closed the doors and set out to build on Basso's successful casual model with a rebrand.

In these terms, Boundary is a make-under, though you'd never guess that by looking at it. The room is strikingly handsome and sultry — the kind of place you'd find James Bond sipping a martini after a day of fox hunting. The signature glass wine wall is still there, but instead of separating the bar from the dining room, the bar now wraps around it, while the room's former vibrant red tones have been muted in favor of dark wood and leather. Booth seating has been replaced with semicircle banquettes that face outward, and an eye-popping kelly green leather double-sided couch adds two rows of seating in the middle of the room. The back dining room retains the open kitchen, though communal tables make it seem more casual. The changes are meant to make the space seem more like a lounge, and it succeeds, albeit as a supremely elegant one.

The hotel's multi-jurisdictional real estate may be a logistical nightmare, but Boundary's menu navigates its two worlds with ease. For diners who want to nosh communal style over drinks, executive chef Rex Hale has put together a selection of small plates, including the mouthwatering pork sugo toast. Shredded pork, simmered for hours in rich tomato sauce, is served alongside slices of toast slathered with goat cheese. Though I liberally spooned the smoky meat over the toast, the tart cheese cut through the fatty pork, making a rich dish seem less so. I finished every last bite.

Boundary's poutine has no such mitigating factor. Riffs on the classic Canadian gravy fries are always rich, but Hale's version multiples the decadence by a factor of ten. Hand-cut fries are smothered in so much brisket gravy, I wouldn't be surprised if they told me the entire cut of beef was included. Golf ball-sized cheese curds jockey for position around a large, over-easy egg that oozes its liquid yolk over the plate. It's good, if rather salty, although my main complaint is that it would be much more enjoyable in the depths of winter.

Hale opts for a Korean take on pork ribs by glazing them with the suddenly ubiquitous gochujang hot chili paste. Here, though, sliced strawberries and pickled radishes cool the meat's aggressive spice and smoke. It's one of the more creative interplays of sweet and spicy I've experienced.

Boundary's highlight is its raw bar, perhaps owing to chef Hale's time spent cooking in the Caribbean. You couldn't find a fresher tuna poke, even if it came with a view of Diamond Head crater. Generously sized cubes of raw, ruby-hued tuna are kissed with soy, sesame and ginger, and paired with crisp sesame and taro chips. I thought things couldn't get any better, but then my server presented me with a hollowed-out half-coconut overflowing with Peruvian ceviche. Corvina, dressed in lime, coconut milk and aji Amarillo chili, is otherworldly — and that other world contains a banquet prepared by Neptune himself. If anyone tries to tell you there isn't good seafood in the Midwest, send them here.

Boundary has not completely forgotten its formal past, however. Even though the eatery seems comfortable as a small plates lounge, I didn't bat an eye ordering a more traditional, coursed dinner with a full-sized entrée. Tender brisket soaked in a red wine jus evokes a Sunday roast beef dinner at Grandma's house. Roasted rainbow trout, prepared simply with roasted turnips and brown butter, is also impeccably cooked, as are the impressive sea scallops. These massive jewels are seared to a perfect medium rare, then served atop green garlic, bacon and asparagus risotto. The flavors combined beautifully, though the risotto was undercooked.

Normally, I would have been satisfied ending my meal with the perfectly pleasant Meyer lemon cheesecake or the rhubarb crisp with buttermilk ice cream. As good as these were, however, they couldn't hold my attention — for in my to-go bag sat the remnants of a side of mac-and-cheese so magnificent, I couldn't contain myself. As my ice cream melted before me, I dug into my takeaway container for a few more bites of the decadent white cheddar cream sauce and noodles. Flecks of garlic breadcrumbs dusted on top gave a toasty crunch that made the dish taste like a molten Cheez-It. I ate it in the booth while I waited to pay and then I dug into it again in the car on the way home. The fact that I am not writing this from one of Boundary's booths over a crock of the stuff is a feat of inner strength.

Whether ceviche with a side of cheesy pasta is what the folks behind Boundary had in mind for the rebrand is up for debate. Probably not, but that's the beauty of the space: You can live in two different worlds in the course of a meal — and they're both utterly delicious. 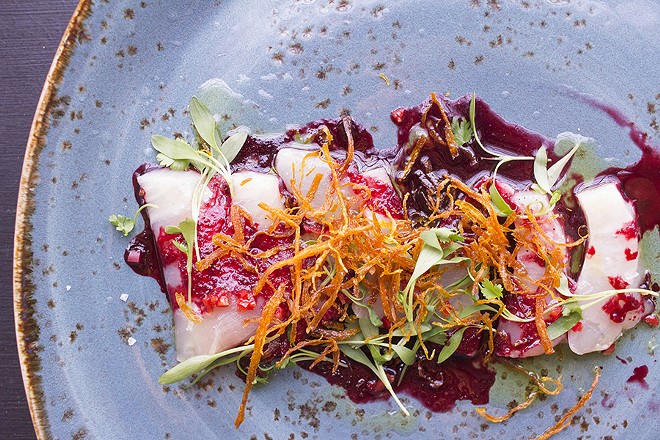 Turn the page for more photos of Boundary