PHOTO BY MABEL SUEN Ben Welch: A star is born.

When I first met Ben Welch two years ago, he had some bold words about his barbecue skills: "I've heard Mike Emerson is my competition."

I thought he was trying to be funny. Welch, after all, was a virtual unknown in the St. Louis barbecue scene, on my radar only because he'd been called in to revamp the menu at a downtown bar, the Precinct, that had been savaged by critics. Emerson, the pit master at Pappy's Smokehouse, is the town's undisputed king of 'cue, with ribs so renowned they've been served alongside Michelin-starred cuisine. For Welch to compare himself to such barbecue greatness wasn't just brazen — it was borderline comical.

Then I had Welch's brisket, a gloriously fatty piece of meat cooked so perfectly I'm still shocked it didn't singlehandedly save the Precinct from oblivion. He called it his baby, and man was that smoke-swaddled beauty a special delivery. Two things were clear: His words were not hyperbole — and he needed a bigger stage.

Fast-forward two years, and Welch is finally getting his big break. No longer a chef-for-hire, the Johnson & Wales graduate opened his first venture, Big Baby Q and Smokehouse, in Maryland Heights in April.

It's a long time in coming. Welch began his career decades ago as a dishwasher and not long after found himself in Emeril Lagasse's NOLA kitchen. More recently, he's been a fixer of sorts in the St. Louis dining scene, offering chef consulting services to restaurants in need of new direction (Brandt's, the Stable, the Precinct). His last gig found him as the opening chef and menu architect at Winfield's Gathering Place, which closed last month. Like the Precinct, Winfield's was owned in part by former Cardinal Jim Edmonds, and there too, Welch's smokehouse menu was the clear highlight.

It makes sense, then, that Welch's first solo restaurant would be a smokehouse. It also makes sense that he chose his father, Bennie Welch, to be his business partner. Dad was the reason he started smoking brisket in the first place.

Years ago, the elder Welch called his son for some advice on smoking meat for a dinner party, but the young chef missed the call. They talked after the party, and Welch shared his thoughts on what he would have done differently to the meat. The conversation inspired him to start smoking once a week to perfect his process — and if what he's serving at Big Baby Q is any indication, he's gotten pretty darn good at it.

In fact, he's gotten so good at it that you'll have a hard time seeing for yourself. The tiny barbecue shack, which sits in a strip mall on Dorsett just northeast of Westport Plaza, is not much more than a two-man takeout show. It's just the two Welches, two picnic tables and a smoker. The younger Welch is no-nonsense behind the rustic wooden counter. You'd better have your order ready in full when you get to the front of the line — during lunch hours there's guaranteed to be one — and when they run out, they run out. I recently got there at noon on a Wednesday to order some brisket. It was already too late.

Fortunately, there were other items to keep me occupied. Smoked chicken wings, large and finger-licking juicy, are encrusted with Welch's secret spice rub, which starts out warm and savory but finishes like a cinnamon sugar doughnut. They were meant to be an appetizer, but there was no slowing down — we devoured every last one as if it was our last meal on earth.

All sense of fullness went out the window, though, when the main courses arrived. Big Baby Q's pork steak is a classed-up version of the St. Louis backyard classic: thicker, smokier and with a more sophisticated sauce. It's a touch tougher than the fall-apart meat you'll find sopping in a disposable, Maull's-filled sheet pan, but that extra heft is mitigated by generous marbling. The spicy brown-sugary sauce forms a glaze that clings to the beautifully smoked meat.

Welch's St. Louis-style ribs are equally worthwhile. The cherry wood smoke and secret spice rub draw out the pork's natural sweetness; the layers of flavor render sauce unnecessary, though Big Baby Q provides an excellent sweet and spicy version whose heat and tang cut through the fatty meat. Welch smokes the ribs until they are tender, but these still have some significant chew and pull to them. Those who think ribs should fall of the bone may be disappointed. Purists will recognize that Welch knows his stuff.

As much as I enjoyed the steak and ribs, Big Baby Q's best porcine offering is the humble pulled pork. Welch's black-gloved hands shred this gloriously smoked shoulder to order faster than a U.S. diplomat shredding documents in revolutionary Tehran. This is not your average, stringy pulled pork — it's torn into massive hunks so that each piece has a perfect ratio of meat, char and rub. Carolina who?

I was able to order the brisket on my second visit; it was worth the wait. Though I'm admittedly partial to Texas brisket, Welch's Memphis-style version impressed. The meat had been slow-smoked at an even 225 degrees for approximately fourteen hours. The result was a hunk of pull-apart meat, interspersed with luscious fat cut by a bitter char bark around the exterior. As such, you get just about every flavor on the palate — the smoke from the wood, the black pepper heat, salt. It's no wonder they sell out almost daily.

The straightforward brisket is not the only way to enjoy this cut of meat, though. Welch cures his own pastrami, and it's as good as what you'd find at a traditional Jewish deli. The tender meat, infused with the flavor of baking spices, is encased in a black pepper crust. It's fantastic.

The big surprise came in the form of the turkey — a meat that tends to dry out so much at smokehouses that I rarely order it. Welch assured me his was worth trying, and he made good on that promise. This turkey was so juicy I could've sworn Welch was injecting it with broth as he served it. It's so simple — just a little salt and smoke — but anything more would have been a distraction from this pure poultry bliss. It's not the Thanksgiving bird of your dreams; it's the better, smokier version of it.

Coming off such a simple pleasure, the "Big Baby" sandwich seemed obscene. Brisket, turkey, pickles, coleslaw, "Alabama White" sauce and the house sweet and smoky barbecue sauce are heaped together onto a Kaiser roll. It's a wonderful hot mess — an eating challenge in the waiting — though I didn't need anything this gratuitous to impress upon me how wonderful this place is.

Welch doesn't break the mold with his sides: You'll find well-executed versions of the smokehouse staples on his menu. Coleslaw, pasta salad, potato salad and baked beans are pretty standard. His house pickles, crisp with floral and dill notes, are a standout, as is the tangy, cracker-crusted mac and cheese.

Perhaps I was too stuffed after indulging the menu's savory side to appreciate the sweet offerings. Pecan pie, baked into a shockingly flaky crust, has a pleasant, salty crunch. The dulce de leche raisin bread pudding, however, needs to be served warm. At room temperature, as it was presented on my visit, it lacks the goo factor that gives this style of dessert its appeal. The chocolate candied bacon crunch bar, too, did nothing for me. It sounds like heaven, but it tasted like a stale, low-carb meal replacement bar.

But with so much beauty on the smokehouse side of things, does it really matter if you're not completely wowed by the sweets? Welch's smoked meats are the star of the show here. Chances are you'll be stressing over how to finish every last morsel of pulled pork rather than asking what's for dessert.

And you'll probably also be stressing about whether you'll make it in time to guarantee your order of brisket. It turns out Ben Welch has more in common with Mike Emerson than just barbecue prowess — he's also got a line out the door. 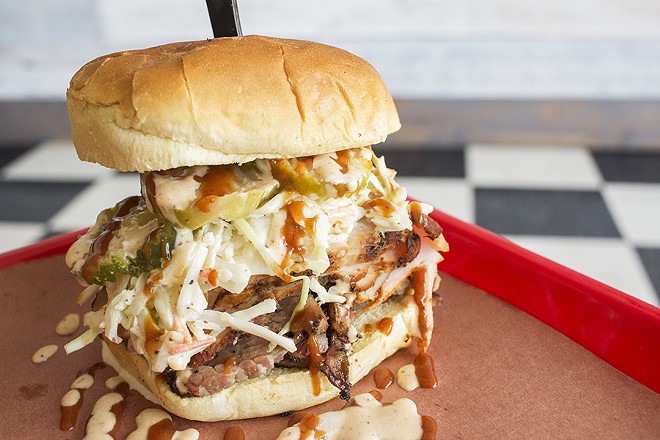 Turn the page for more photos of Big Baby Q and Smokehouse.