Venkatesh Sattaru doesn't understand how other Indian restaurants do it. Sub-continental cuisine, after all, requires time, involves complex spice blending and has so many sub-genres it's hard to keep them all straight. Yet the majority of Indian spots in the U.S. offer multi-page menus with enough variety to make your head spin. Promising such a staggeringly long roster of dishes makes about as much sense as saying you have a barbecue brisket recipe that can be done in an hour. "Where do they find the time?" Sattaru wonders.

He ponders this question as he arrives at Absolute BBQ Indian Wish Grill, usually by 7 a.m., to prepare the day's offerings. The menu at his two-month-old restaurant is roughly one-tenth as long as what you'd find at the average Indian restaurant — but he doesn't use packets or prepared spice blends. Every day, he grinds all of the spices fresh. It's a lot of work and takes a good deal of time. He won't come out and say how he thinks the others do it, but you can read between the lines.

Sattaru bucks the conventional Indian restaurant playbook with more than just menu size and hand-ground spices, though. At Absolute BBQ, his first foray into the restaurant business, he presents a side of Indian cuisine often overlooked in the U.S., namely its barbecue culture. Sure, we've all had the candy-apple hued tandoori chicken legs and thighs at all-you-can-eat Indian buffets, but at Absolute BBQ, those are only the beginning — and when you bite into one of his five shockingly flavorful kabob styles, you'll realize how much more they have to offer than you'd ever imagined.

At first glance, Sattaru seems like an unlikely vehicle for revolutionizing the St. Louis area's Indian cuisine. The proud Army veteran has his hands full with his (other) full-time job as owner of the technology firm Keysoft IT. However, Sattaru's entrepreneurial spirit, instilled in him by his venture capitalist father, has kept him on the prowl for new business opportunities. When travels around the world opened his eyes to the void in local Indian restaurant options, he set out to do something about it — deciding to open a place himself.

Sattaru draws his culinary inspiration from his family's native Hyderabad, a large city in the south of India that is the nation's second largest technology hub. The area, and by extension its cuisine, is cosmopolitan, which explains why even with the comparative brevity of Absolute BBQ's menu, everything from Arab-influenced kabob marinades and Indo-Chinese dishes is on offer.

Kabobs here come either boneless or as bone-in leg quarters and can be served in five different styles, ranging from not-so-spicy to melt-off-your-face. More than just marinade, the different spice blends are glazed over the meat like a wet paste; you'll want to lick your fingers as if you were eating Buffalo wings.

The "Malai" version, the style recommended for those who prefer a mild taste, has subtle notes of baking spices and garlic that allow the savory char from the scorching tandoor oven to shine through. After this, however, all bets are off for the spice level.

Though the servers tell you that the "Hariyali Tangdi" is mild to medium, it's hot. Searing hot. However, the tang from yogurt, lemon and bright chilis makes it impossible to stop eating, no matter how on fire your mouth may be. And it's nothing compared to the Arabian kabob. The searing hot chili glaze on this chicken is more scorching than the summertime desert in Saudi. You'll have tears streaming down your face, but through the pain you can still detect flavor — a testament to Sattaru's prowess with spice blending. Thankfully, they sell mango lassi to soothe the burn.

Even the biryani has a kick. The rice, flecked with vegetables and scented with cardamom, has a pocket of seasoning that, when mixed in, infuses the dish with cumin and chili heat. Ladle some of the butter chicken over the top, and it's a magnificent combination of flavors. Here, the ubiquitous Indian dish has the texture of a Thai peanut sauce, but the warm flavor of garam masala. There's a gentle heat on the back palate that cuts through the richness. On a cold, late fall day, nothing could be more comforting.

"Chicken 65," a vibrant red dish that originated in Chennai, is lightly battered, fried and smothered in a tart lemon and chili spice mixture. The breading is delicate — barely there, in fact — and acts more as a binder for the seasoning than a full coating. The same treatment is given to cauliflower on the "Gobi 65"; the piquant spice flavors compliment the vegetable's earthiness. Tender goat meat simmers in luscious cardamom and cumin-forward green curry sauce.

Though enjoyable (save for the couple of bone fragments in the mix), it is overshadowed by Absolute BBQ's signature dish: the goat haleem. Sattaru says he makes no money on this dish, but that he feels it's his duty to serve it so that people can know what true Hyderabadi haleem is all about. He's certainly done us a service. Goat meat, lentils and a seemingly infinite number of spices — among them cloves, cardamom, cumin, nutmeg, cinnamon and coriander — are simmered and almost continually stirred for seven hours. The result is a rich, porridge-like concoction that pops with flavor as you encounter pockets of spice. Many of Absolute BBQ's regular customers come in strictly for this dish — and those who have had the real deal elsewhere (including in Hyderabad) say it's an outstanding version. It was my first time trying haleem, but I can see why the experts reach that conclusion.

Absolute BBQ has nailed every last dish it serves; what it's not serving, however, is something that the restaurant needs to work out. During both of my visits, spaced out over two weeks, the restaurant was out of numerous items that I would have liked to try — the namesake "ABQ Chicken," the goat burger, the Manchurian chicken. As Sattaru explains, the dishes he serves are labor-intensive, and when they run out, they run out.

However, things aren't actually that clear cut. Upon arrival, diners are presented with two different menus. One is small, comprising mostly kabobs, a few starters, some naan, a section for the Indo-Chinese wok and a few different different curries. The second is a takeout menu that varies significantly in both size and substance (and I struggle to understand why it advertises a prime rib sandwich on cheese garlic bread and curly fries). The confusion continues, as both menus deviate from what's listed on the online menu.

The conflicting information makes it difficult to understand exactly what Absolute BBQ actually serves. I gave up trying to figure it out myself on one visit and just asked the server what was available that day. Tellingly, he was prepared, and actually had a cheat sheet of a menu he kept in his back pocket.

Perhaps the three different menu directions suggest that Sattaru toyed around with the idea of a larger, more traditional Indian restaurant menu when he first envisioned Absolute BBQ. Once he realized all that is involved in preparing fresh, authentic food, I can understand why he had to scale back. Fortunately, you won't miss what isn't there — you'll be too enamored with the thrilling dishes right in front of you. 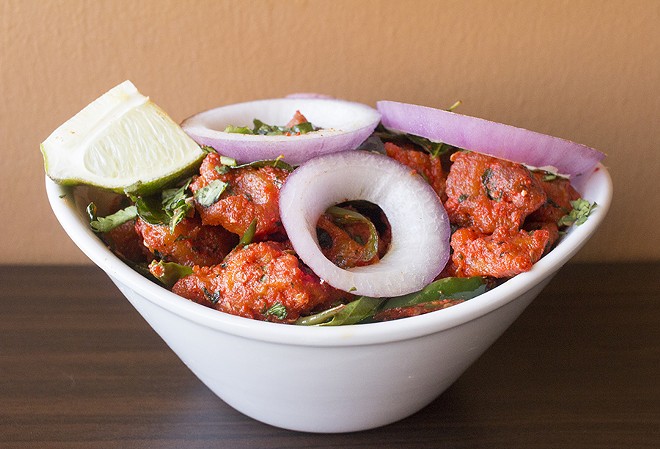