Regional Thai Fare Shines at Chao Baan in the Grove

MABEL SUEN Spice is a key feature of the Chao Baan menu, such as in the khao tod nam sod, accented with additional heat from curry paste.

Chao Baan should not exist — at least no more than a combination south Florida/Cuban lunch counter meets New England clam chowder shack should exist. If you're the average American diner, this most likely will not register, but as co-owner Shayn Prapaisilp explains it, there is no reason such diverse regional cuisines are offered on the same menu; they coexist at Chao Baan because his parents happened to fall in love in Chicago many decades ago.

Prapaisilp says his father, Suchin, moved to St. Louis from the far-southern part of Thailand in the 1970s and, not long after he arrived, opened Jay International Food Corp market on South Grand Avenue. Suchin regularly traveled to Chicago to purchase product for his store, and over the course of his trips there, his path would cross with that of Prapaisilp's mother, Sue, who had moved to the Windy City from northern Thailand.

The two fell in love, married and settled in St. Louis, where they opened the King and I on South Grand in 1981. Back then, their restaurant was the only Thai eatery in town, so the Prapaisilps designed the place to be accessible to Midwesterners who were trying the cuisine of the couple's homeland for the first time. This meant a menu heavily reliant on Chinese-American staples and approachable dishes from central Thailand, the region that popularized such mainstays as pad Thai and pad see ew and has gone on to be a template for what most American diners associate with Thai cuisine.

The Prapaisilp family enjoyed tremendous success with the King and I and Jay International and eventually went on to open Global Foods Market, United Provisions and Oishi Sushi and Steakhouse. Their talent in the local food industry was well known in town, so when the developers of the brand-new Chroma development in the Grove were looking to fill their restaurant space, they reached out to Prapaisilp to see if his family would be one of the tenants. 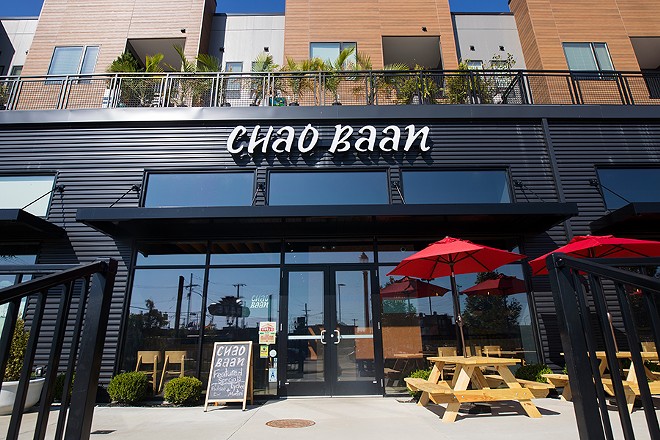 The developer — as well as Prapaisilp's mom and dad — had in mind a King and I 2.0 of sorts. Prapaisilp, however, approached the opportunity differently. He'd always wanted to showcase the food that his family cooked and ate at home, a fusion of northern and southern Thai representing the lesser-known regional flavors of the country's diverse culinary heritage. He'd seen the St. Louis dining scene embrace more regional and traditional flavors over the past few years, and he thought the time was right to take a chance. Although his parents were extremely nervous about the idea, they let him take the lead on the project to realize his dream. 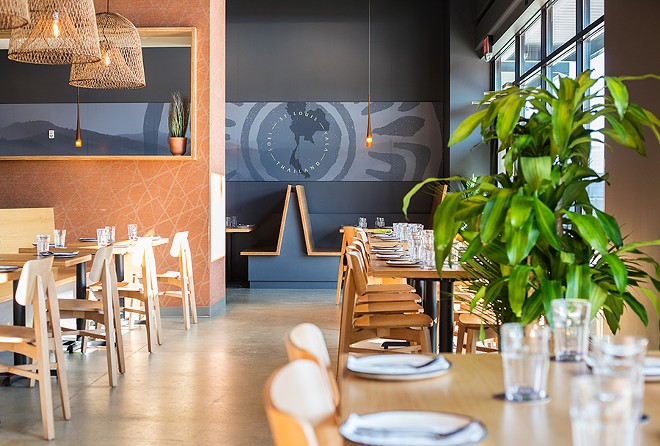 Chao Baan, which means "of the people" in Thai, opened in June in the mixed-use Chroma building near the intersection of Chouteau and Sarah on the eastern side of the Grove. The restaurant space was sleek and industrial before the Prapaisilps took it over; with the help of SPACE Architecture + Design, they were able to create an environment that honors the contemporary feel of the room while still feeling warm. The vibe is sophisticated and features blonde wood tables and banquettes, gray-blue walls and striking basket-like chandeliers that cast a warm glow over the dining room. The gleaming open kitchen runs along the back of the restaurant, and a small bar area serves as an intimate cocktail lounge toward the front.

Prapaisilp's mother and father may have been unsure about how their traditional (and, at times, breathtakingly spicy) dishes would be received, but they need not have worried. The first bite of the mieng kham green leaf wraps provides dazzling confirmation that this is a welcome detour from the standard Thai playbook. Sesame leaves, as verdant in flavor as in color, are topped with a mix of dried shrimp and toasted coconut that's accented with pieces of lime and one sliver of a fiery red chile. When you wrap the mixture in the leaf and bite into it, it's like fireworks going off in your mouth: Heat cooled by mouth-puckering lime; brininess softened by toasty coconut; a tamarind dipping sauce that ties everything together with sweetness. The mélange of flavor and texture is positively electric.

If the green leaf wraps light up the palate, the Thai pork sausage, sai grog, coats it in a rich blanket. The lemongrass- and chile-perfumed meat is coarsely ground, which allows you to experience the bliss of biting into individual pieces of meat and fat. Outside, the casing is grilled just enough to give it a slight char; its bitterness complements the natural sweetness of the pork. 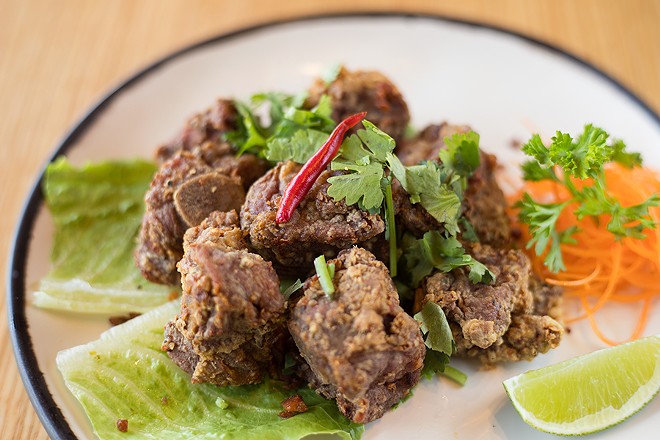 Riblets are another outstanding use of pork at Chao Baan. Here, small, breaded and fried pork nuggets are marinated in soy, garlic and Golden Mountain sauce (a Thai sauce made from fermented soybeans), which imbues the meat with umami. The result is an intense, porky flavor that is good on its own, but when paired with the garlic crunchies on the bottom of the plate (think Long John Silver "crumbs," but not shameful) is otherworldly.

Larger plates are equally impressive. Grilled eggplant, glazed in hoisin and garlic, is a masterclass in cooking the vegetable so that it's softened, but not to the point of becoming mushy. It feels satisfying and decadent when ordered alongside the vibrant yum woon sen, a cold salad of beans, noodles and shrimp electrified by lime juice, chiles and fish sauce. At once sweet, sour, spicy and funky, the dish leaves your head spinning. 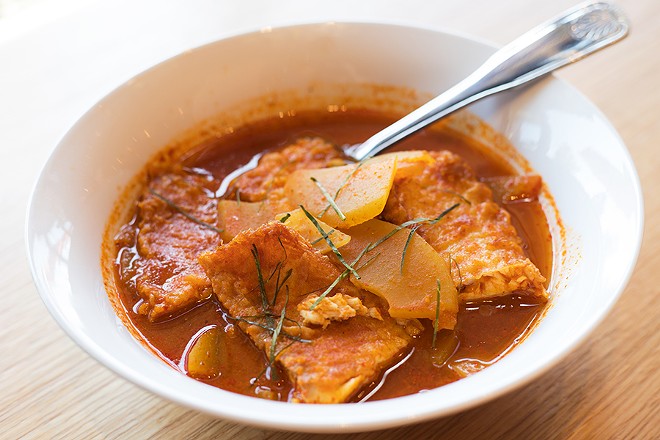 And that feeling doesn't end there. Chao Baan's beef nam tok, the lime-juice-kissed sliced steak dish, is dusted in toasted rice powder that thickens the citrus glaze, giving it a richer texture than other versions. Pad sataw, a dish consisting of bitter beans, ground pork and shrimp, is intensely spicy, but is balanced with a little lemongrass and fish sauce to give it a complex — and craveable — flavor.

The gaeng kiew green curry underscores the Prapaisilp family's ability to hold such different flavor profiles — in this case pungent and soft — in the same bite. Here, tender chicken, mushrooms, green bamboo and green tomatoes bob in a lemongrass-scented coconut and green chile broth that seems mild at first, but sneakily warms the mouth with each additional bite.

There is nothing sneaky about the kua kling's heat. Steak, glazed with a lemongrass-forward curry, has a heat that quickly envelops the entire mouth in fiery spice. It's not an abrasive burn, though — more like sitting extra close to a fire rather than thrusting your arm into the flames. It will make your nose run and brow sweat, but it's so flavorful, you won't be able to stop eating it.

Prapaisilp admits that just as his parents predicted, he's gotten a lot of feedback about the spice level. However, contrary to their fears, the response hasn't been a request to turn down the heat. "They just ask for extra water," Prapaisilp laughs. Indeed, a dinner at Chao Baan necessitates a bit of a palate cool-down. Yet it's a small price to pay for one of the most thrilling — and unlikely — Thai experiences in town.