Regional Mexican Fare Shines at Alta Calle — but Can it Evolve Without its Star Chef?

Alta Calle is the story of Dulce and Veronica Morales, two sisters who, after years of living across the country from one another, have finally realized their dream of owning a place together. It's fitting, then, that this would be a personal endeavor: The name Alta Calle translates to "high street," a reference to the hilly town in Michoacán where their family hails from.

Naming the restaurant after their family's village is significant, especially for Veronica. In 1997, she opened the original Las Palmas Mexican restaurant in Overland, then expanded to several other locations, growing the popular spot into a bona fide brand. Eventually, she sold off every location except the one in Maplewood, which continues to be a beloved destination for the sort of approachable, Tex-Mex comfort food that is geared toward American diners. 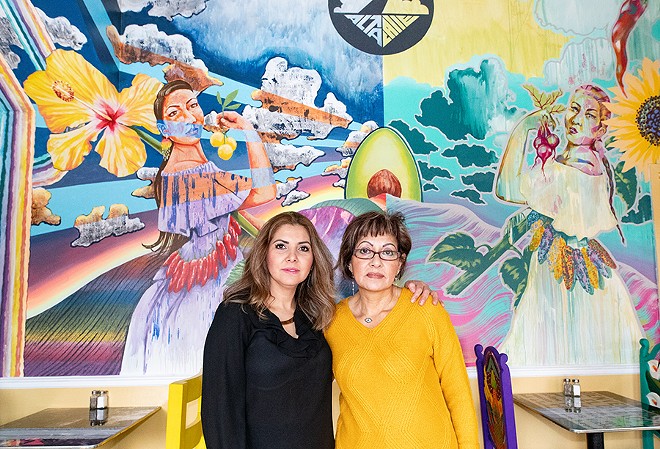 For her next venture, she wanted to do something different, something that felt both elevated and truer to the cuisine of Michoacán than what she'd done in the past. She'd get the opportunity to do that after a chance meeting roughly a year ago. Veronica and Dulce were walking around the South Grand business district in St. Louis, scouting the area for a potential restaurant space. When they came across the vacant corner storefront that formerly housed the Mekong restaurant and Upstairs Lounge, they were dazzled by its prime location, but disappointed that there was no "For Lease" sign in the window.

As they peeked around the building, its owner, Tai Tien Tran, noticed them and decided to come out and introduce himself. As he explained to them, he and his family had been looking for the right person to take over their building after the passing of his son, Tu Tien Tran, but they were particular about who that would be. As the three got to talking, it became clear to Tran that the Morales sisters were the right ones to carry on the space's legacy. Within a short time, Dulce and Veronica had signed a lease for the building and were hard at work converting it from a decades-old Vietnamese restaurant and EDM club into Alta Calle. 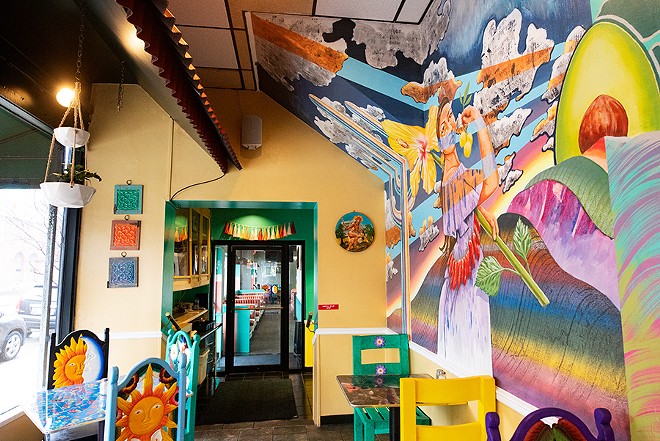 That transformation is nothing short of stunning. What was once a dark, stuffy interior is now strikingly vibrant. Yellow and turquoise painted walls offer a bright respite from the city's dreary, late-autumn weather. Those walls provide a colorful backdrop for even more colorful artwork — photographs, paintings and a beautiful mural depicting two traditionally dressed Mexican women surrounded by flowers, fruits and vegetables. Even the chairs are works of art; each one is intricately carved and colorfully painted with suns, birds and fruits.

The food at Alta Calle is no less colorful. After announcing the restaurant and doing some initial research and development, the sisters brought on chef Tello Carreón to help them hone the concept. Carreón, who, most notably, was executive chef at Nixta the year it was named the "No. 9 Best New Restaurant in the Country" by Bon Appetit, had worked with Veronica many years ago. After reconnecting, he agreed to come on as a chef consultant, an arrangement that has resulted in his distinct influence on the menu, even though he left the restaurant a few months ago.

Carreón's style, coupled with the Moraleses' point of view, results in a menu that hit a sweet spot between familiar Mexican comfort fare and more elevated cuisine — often on the same plate. Enchiladas, for instance, are comprised of tender chicken, rolled into a corn tortilla and baked. However, instead of being smothered in cheese and red sauce, the dish is blanketed in a thin layer of salsa verde crema. At once verdant and rich, the crema enhances the dish but does not take over. A sprinkle of cotija cheese, fresh herbs and edible flowers gives the dish a finish that looks like snow-covered blooms. It's as gorgeous as it is delicious.

Alta Calle's flautas are equally sophisticated. Instead of the deep-fried, ground beef-filled versions often associated with the genre, Alta Calle's are packed with herb-kissed mushrooms and potatoes. An order consists of four of the cigar-shaped flautas, which are stacked atop one another in a square shape like Lincoln Logs. Fresh mint, pickled shallots and chiles cut through the richness of the fried corn shell while adding a stunning visual element to the dish. 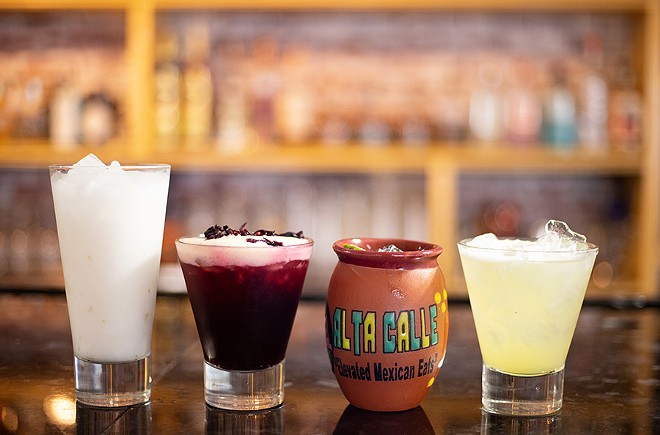 Even the guacamole and queso feel refined. The former, enlivened with pickled shallots and mint, is so light it's almost frothy. A garnish of pepitas gives the dish crunch. The latter is positively silken. Drizzles of green and red chile oil are like piquant ribbons that brighten this cheesy wonder.

I was impressed with both the freshness and sheer amount of crabmeat that came with the grejo tostada — two small discs of blue corn were completely covered in the shellfish. I only wish they were dressed with just a little more citrus to make them less bland. The shrimp tacos, however, were full of bright, tropical flavor. A pineapple-chile glaze covered the shrimp, which were tucked into a warm tortilla with a rich poblano crema. The most striking element, however, was how perfect the shrimp's texture was. The shellfish was so fresh, and cooked so perfectly, they were snappy.

The huarache de maiz azul is a breathtaking, multidimensional dish. Black garlic, charred zucchini, pinto beans, fresh cheese, pepitas and charred avocado are layered on top of one another, yet their individual textures and flavors remain distinct rather than melding into some indiscriminate mélange. It's masterful. 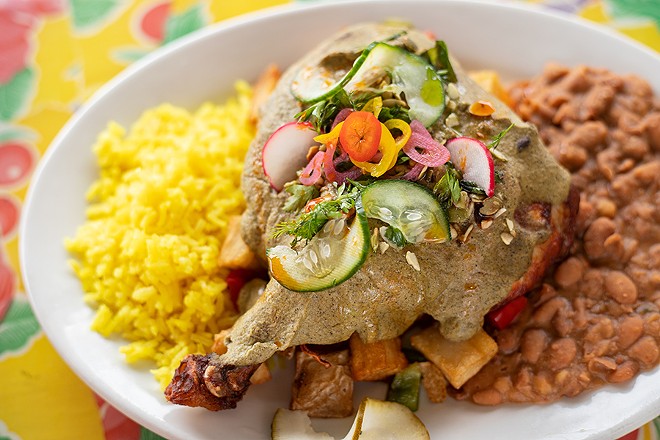 Alta Calle's biggest surprise, however, is the Pollo Alto, a half chicken cooked sous vide and then fried so that the succulent meat is contained in its golden, crisp skin. The chicken is garnished with rich mole pipian, a mild green mole made from pumpkin seeds, then served on a bed of perfectly seasoned roasted potatoes, beans and rice. It's a platter of pure comfort.

I could have ended the night with the chicken in mole and been perfectly happy, but after opting for the flan de queso, I finished my meal in pure bliss. The rich, custardy dessert is like a cross between crème brûlée and cheesecake — a caramelly, vanilla confection the texture of tempered butter.

Such a soulful dessert conjures up images of Dulce and Veronica hanging out in the kitchen together, reminiscing as they cook up old family recipes. If I have one concern for Alta Calle, however, it's that the Moraleses' story has gotten obscured by Carreón's talent and visibility in the industry. This might seem like an odd assessment — that a popular chef's involvement, which has resulted in great food, could be to anything but a positive. However, there's no question that Carreón's star power has resulted in a perception that Alta Calle is Nixta 2.0; looking at the dishes, that's not an unfair assessment. It's also untrue.

I question if, now that Carreón is no longer in the restaurant, Alta Calle runs the risk of trying to replicate the distinctive work of a particular chef rather than standing on its own. If Alta Calle is to succeed — and, from what I have seen, it stands a good chance — it will do so by being what it set out to be all along, which is the story of Dulce and Veronica Morales. There's no question it's one worth being told.