The moving image — whether it's film, television or that six-second video of a kitten doing back flips you saw on Facebook — has a unique and privileged relationship with time. We can look at an event that happened a century ago knowing it's from the past but still feel as if we're seeing it in real time. And through that time-straddling quality comes another unique relationship: From the Lumière's first filmed images to whatever event is live-streaming as you're reading this, history became something you can watch.

Perhaps it took the emergence of the 24-hour news cycle, or the rise of enormous online databases cataloging everything from straightforward facts to the commercial jingles you remember from childhood, for non-fiction film to take full advantage of our 120-year archive of historical images. Documentary films, once known for their stentorian narration and pedagogic techniques, no longer have to tell the viewer what's going on. Now we can see it for ourselves.

That access to filmed history has a lot to do with the simple satisfactions provided by a film like RBG, a detailed biography and enthusiastic celebration of the life, career and unexpected fame of Ruth Bader Ginsburg, the 85-year-old Supreme Court Justice who has become a symbol of feisty dissent in an increasingly conservative judicial system. Produced by CNN Films, it's a sober, straightforward and surprisingly informative portrait, providing a detailed account of Ginsburg's legal accomplishments even while acknowledging her emergence in popular culture (the SNL sketches, the panoply of t-shirts and coffee mugs lauding "the Notorious R.B.G.," the Tumblr site dedicated to Ginsburg's dissents and achievements). It's a film that deftly operates on two planes, providing a look at the past but remaining resolutely contemporary.

Filmmakers Julie Cohen and Betsy West follow a conventional path (talking heads and archival footage, all set to a muted pseudo-Glassian score) in telling Ginsburg's story, but she nevertheless emerges as a refreshingly unconventional heroine. Ginsburg is, by all accounts, a determined and serious person. 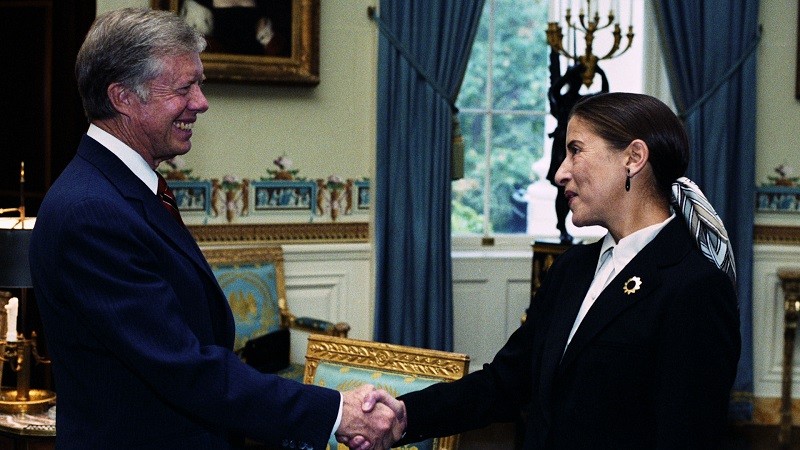 The film provides friends and family members attesting to her dislike of small talk, her long working hours and her dedication to the law. More revealingly, it offers a thorough account of her legal career prior to her current position, where she fought for a variety of civil rights issues, ensuring equal pay for women in the military and challenging a law that excused women from jury duty. According to the film, hers became a systematic battle for equality, each victory chipping away at long-standing practices of discrimination. Her current status as a spirited legal superhero in a black robe and lace jabot is, it turns out, well-deserved.

As a history of Ginsburg's public career, including her Supreme Court opinions and her position in the Court's shifting ideological balance, RBG packs a lot of information in its 98 minutes without trivializing its subject, but those who only know the justice through her meme status won't be disappointed. We get a close look at Ginsburg's personal life as well — her passion for opera, her daily trips to the gym and, perhaps most tellingly, her understated amusement at all of the fuss she's now accorded. (She bought dozens of Notorious R.B.G. T-shirts to give to friends.) Balancing a well-researched social history with the personal details of Ginsburg's life, RBG is modest, respectful and ultimately convincing in positioning its subject as a central figure in the long battle for legal equality. It's a good film — and a great subject.