COURTESY OF THE ARTIST Miistro Freeyo, 24, credits a bout with West Nile Virus with helping him find his way -- and his faith.

In the vibrant and diverse scene that is St. Louis hip-hop in the twenty-teens, it's hard to stand out, but Miistro (pronounced like "Maestro") Freeyo manages to do just that. It's still relatively uncommon to see rappers playing traditional instruments — especially while covering vocal duties at the same time — so the fact that Freeyo's performances feature him accompanying himself on keyboard while both rapping and singing is simultaneously an attention-grabbing novelty and a legitimate musical asset.

But the reception could have easily gone another way.

"I was a little hesitant at first," says Freeyo, 24, of rapping with self-accompaniment, something he first tried in "middle school, going into high school years." "At first I didn't know how it was going to be received, if it was even possible."

At the outset, in fact, he was met with skepticism. "Nobody really took me seriously or looked at me like a rapper," he explains. But after his peers got a chance to witness his skills, Freeyo says, "I started seeing the reaction and gaining confidence in myself."

Although this sort of musical multi-tasking is commonplace in just about every other contemporary genre, it's still relatively rare in hip-hop (with the notable exception of rising star Anderson .Paak). Consequently, Freeyo is still regularly met with some confusion, even though he no longer feels as though he has to prove himself.

"The first thing that comes to people's minds is maybe I'll be playing background for somebody," he says. "Then they see me setting up the mic." 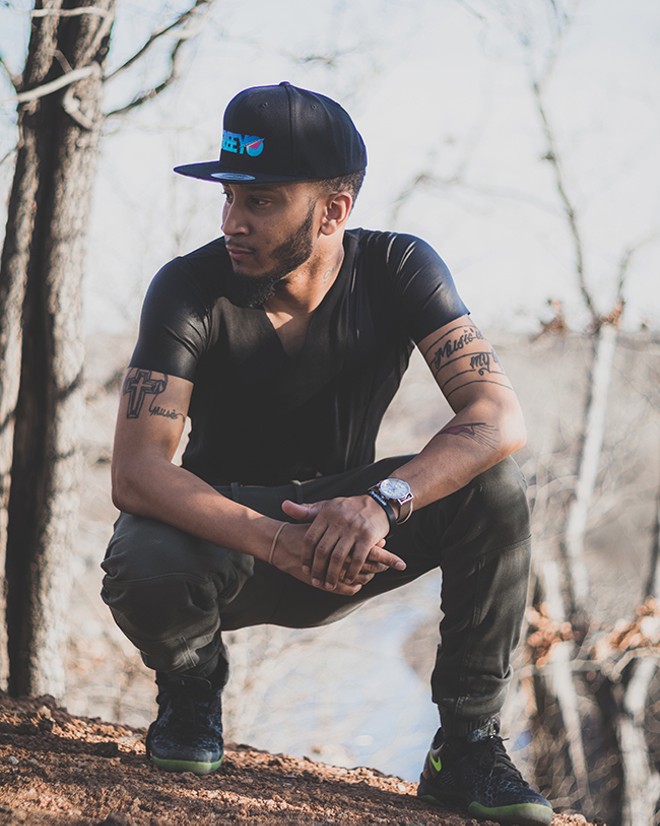 Ultimately, his background on keyboard has been a boon to the Miistro, allowing him to approach his art from a different perspective than the majority of his peers. Freeyo's ability to apply an understanding of melody and harmony to his lyrical content results in a distinctly organic sound, as much akin to the singer-songwriter stylings of John Legend as to most of Freeyo's more rap-centric peers. This holistic approach to music is on full display with Freeyo's latest effort, entitled The Prelude, to be released on May 9 — most notably on "Miss America" and "Do You Believe."

It also happens to be these two tracks (especially "Do You Believe") on which Freeyo's faith — which he says has been a central part of his life since his high school years — takes the forefront. On the track, Freeyo asks, "Do you believe in God?" before adding, "Through every trial and tribulation I've kept my faith/I can't even lie, I've been hit with some pain." In fact, as Freeyo tells it, one of these tribulations was ultimately responsible for the depth of his spiritual conviction.

"I think I was in fifth grade," he recalls. "I got up one morning and thought I had, like — I think somebody diagnosed it and said I had the flu or something like that." Not thinking too much of it, Freeyo says he "tried to write it off; then I got up one morning to go to school and my legs was weak."

Soon the problem progressed to the point that the eleven-year-old was completely unable to walk. He ended up missing nearly half a year of school. "Even then, the doctors didn't really know" what was causing the problem, he says, "until they did a spinal tap on me and saw traces of the West Nile Virus." After his diagnosis, and doctors were able to start treating Freeyo, he began the long process of learning to walk again.

"At the time, my parents and people around me was more worried than I was," Freeyo explains. During his treatment at Cardinal Glennon Children's Hospital, he recalls, "Even though I couldn't walk... I'm in a wheelchair, there's other people in wheelchairs too; we're racing around the hallways. I'm still being a kid at the time, not really realizing the seriousness of the thing."

It wasn't until later that Freeyo saw the significance of his bout with West Nile and began to frame the illness and recovery in spiritual terms. Though his parents took him to church throughout his childhood, even during the peak of his illness, Freeyo says with a chuckle, "I was young. I was still at that falling-asleep stage.

"Afterwards, when you get older, you kinda look back on certain things and you get more understanding," he continues. For him, this understanding began to take shape around his high school years, at roughly the same time that he began playing keyboard at his friend's father's church — something he continues to do weekly.

For Freeyo, all these things — his illness, his early exposure to the keyboard, his faith — are interconnected, and all have a role in forming the artistic vision made manifest with his Prelude EP.

"Nothing happens by chance in life. My whole journey from me having West Nile Virus back in 2003 — not being able to walk..." he says, pausing thoughtfully, "that's where I get a lot of my confidence from."