Of the many vibrant characters along Joe Kurowski's pizza-making journey, none are as vivid as Baffo. A 50-year-old Neapolitan pizzaiolo nicknamed for his prominent mustache, Baffo made dough every morning at Italy's famed Pizzeria Dal Presidente, refusing to measure anything and calculating the mixing time by his cigarette breaks. He was an absolute genius.

Kurowski found himself working alongside this mustachioed gent after landing in Naples for a friend's wedding. Having left the practice of law a short time prior, Kurowski was sure that he wanted to become a professional pizzaiolo, so he set out to Brooklyn and the famed wood-fired pizzeria, Fornino. There, he got an adequate education in dough-making that he used to beg his way into Pizzeria Dal Presidente's kitchen. For a month, he worked with Baffo, learning to make pizza by feeling rather than a recipe and soaking in the energy that defines the quintessential Neapolitan pizzeria. It was a foundational experience that would define his idea of what he wanted to create in a pizzeria of his own one day.

Kurowski carried his experiences at Pizzeria Dal Presidente with him back to New York, where he worked for Danny Meyer's pizza restaurant, Marta, and eventually Rad Times Pizza, the roving pizza brand that did festivals across the country. He did some consulting, too, all the while never letting go of his vision to create a Neapolitan-inspired pizzeria back in St. Louis. He would regularly travel between his hometown St. Louis and New York in search of a location, but when he wasn't having any luck, he decided to move back home so he could dedicate himself fully to locating a spot. After searching around town, he found a storefront on the Hill and began construction on what was to become Pizzeria Da Gloria.

While doing the buildout on the restaurant, Kurowski intended to do a series of pop-ups out of his house for research and development purposes. That series turned out to be a single event when the pandemic turned all of his plans on their head. Forced to rethink his business model, Kurowski threw himself fully into getting the restaurant and his recipes ready for takeout business, finally opening the doors to Pizzeria Da Gloria in late November of last year.

When Kurowski tells people that he had to change his business model to accommodate the takeout-focused pandemic, they often do a double-take. Pizza, after all, is the quintessential carryout and delivery food, rivaled only by white-and-red-boxed American-style Chinese food for at-home dining dominance. However, as Kurowski explains, traditional Neapolitan pies are meant to be eaten straight out of the wood-fired oven. The crust is chewy and char-blistered; the interior surface is so thin and bubbling hot you eat it with a knife and fork. Served fresh from the fire, it's revelatory, but boxed up it can quickly get tough, soggy and flaccid. To combat this he had to adapt, slightly altering his cook times and investing in special boxes with grooves that both trap any grease or liquid and allow for better airflow.

The result of his efforts is a truly outstanding specimen of the Neapolitan form — the sort of pizza that would make Baffo beam with pride at his protégé. His Margherita, which is the standard by which all Neapolitan pizza is judged, hits the perfect note of simple, tart tomato sauce, creamy fresh mozzarella cheese and verdant basil. However, Kurowski is so bold as to put his own spin on the classic, adding shredded mozzarella and pecorino Romano cheese. These welcome twists bind the cheese to the sauce, making for a more user-friendly takeout experience.

The Mushroom pizza is another example of Kurowski's pizza prowess. Earthy cremini and oyster mushrooms sit atop a white wine lemon cream sauce base; the interplay of earth and tart lemon is breathtaking. Equally excellent is the Broccoli Rabe and Sausage pie, which pairs the bitter green with hunks of spicy, housemade Italian sausage. Chili oil adds to the heat, which is mitigated by the luscious mozzarella that undergirds every bite.

A simple-sounding Marinara pizza is surprisingly complex; the mix of rich tomato sauce, chili flakes and olive oil is an absolute bomb of umami and spice. Slivers of razor-thin garlic, a la Paulie in Goodfellas, are pungent without being overbearing. Even a Caesar salad dazzles with the addition of kale and a generous sprinkle of ground black pepper and pecorino Romano cheese. Like the pizzas, the salad was impossibly fresh and crisp, even after traveling for twenty minutes. 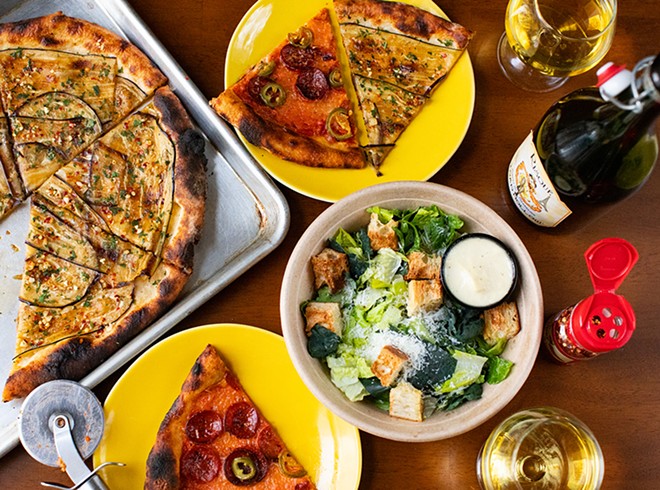 However wonderful these offerings at Pizzeria Da Gloria, the restaurant's indisputable signature pizza is the Bonci, an eggplant and chili oil pie that is unlike any other pizza in town. Named after acclaimed Roman chef Gabriele Bonci, with whom Kurowski took a life-changing, two-day master pizza class, the dish is a delicious love song to all that pizza can be. There is no sauce and no cheese — just dough and olive oil layered with eggplant sliced so thin it's translucent. Chili oil and tiny pieces of garlic gild the pizza, soaking into the eggplant like a beautiful, earthy sponge.

Kurowski longs for the day he can welcome people into his pizzeria and watch them eat that Bonci pizza. As he sees it, the pizza is important, but the experience is the goal. But if you close your eyes and take a bite of that garlic-soaked, eggplant wonder, it doesn't matter where in the world you actually are; Baffo's Naples is right there. 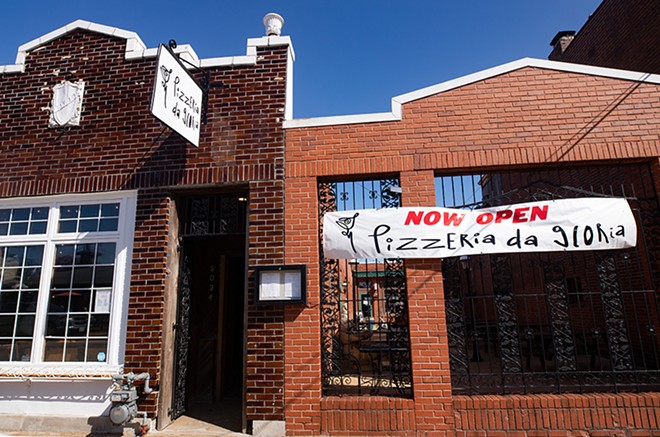