If Pizzeoli is Scott Sandler's symphony, a restaurant that's been painstakingly thought-through, fussed-over and crafted with an air of reverence, Pizza Head is Nevermind the Bollocks, a brash middle finger to anyone who'd dare to tell him what kind of tomatoes, cheese and flour to use in his pies, goddammit.

On the surface, the newer spot is a jarring departure for fans of Pizzeoli, the Neapolitan pizzeria that served as Sandler's first foray into the restaurant business. Since opening the spot in Soulard in 2014, Sandler has developed a reputation as the city's most serious pizza-maker, putting the sort of care into his pies you'd expect from a master craftsman. That has allowed him to stand out in St. Louis' crowded pizza field, earning a legion of devoted fans who look to him for one of the — if not the — city's most authentic Neapolitan-style pizzas. That the spot is watched over by a portrait of Sandler's guru only adds to the feeling of mindfulness.

In some ways, then, it might seem like Sandler is rebelling against that persona at his two-month-old effort on South Grand, Pizza Head. Everything about the place screams irreverence — from the website informing customers that they should not expect to be coddled to the blaring punk rock music that plays at all hours of the day, Pizza Head stands as an unapologetic, New York-attitude, no-frills grab-and-go spot that seems to turn any high-faluting notions of the "art" of pizza-making on its head.

That is, until you taste the pies. Sandler is a man whose approach to pizza borders on obsession. Clearly, it would be impossible for him to offer anything less than perfection. Pizza Head may present itself as a cheap and greasy joint, but no matter how you dress down the surroundings, Sandler's pizzas are transcendent.

For someone who exhibits such skill, you'd think Sandler has been making pizzas his entire life. Actually, the restaurant industry is a second career for the former mortgage investor, who picked up home baking as a hobby.

At first, Sandler used pizza-making as an outlet for his creative side while he toiled away at his day job. After the real estate opportunity that brought him to St. Louis from California fell through, he sought solace in his passion project and saw the rough patch in his career as an opportunity to open the Neapolitan pizzeria he'd always dreamed of running.

Though the Neapolitan style, with its specifications set in stone by a literal governing council dedicated to purity of the form, appealed to his fastidious personality, it could sometimes be stifling to the artistic sensibility that drew him to creating food in the first place. Granted, Pizzeoli didn't follow the requirements laid out by Associazione Verace Pizza Napoletana to a T, but Sandler still tried to stay as true to the form as possible.

At Pizza Head, Sandler revels in his liberation with a spirit that is more street artist than craftsman, and he's created an atmosphere to match. In fact, from the looks of the spot, diners might be forgiven for thinking they've wandered into a bar that's gearing up for a punk show, not a restaurant. The entire room, which formerly housed the short-lived Brickyard Tavern and Absolutli Goosed before that, is painted black. An image of a Sex Pistols-inspired British monarch with the phrase "Good Pizza Is Not Dead" looks out over the room. Fliers for punk shows past are lacquered onto the tables, and blaring guitars, crashing cymbals and screaming vocals fill the room with sounds of angst. 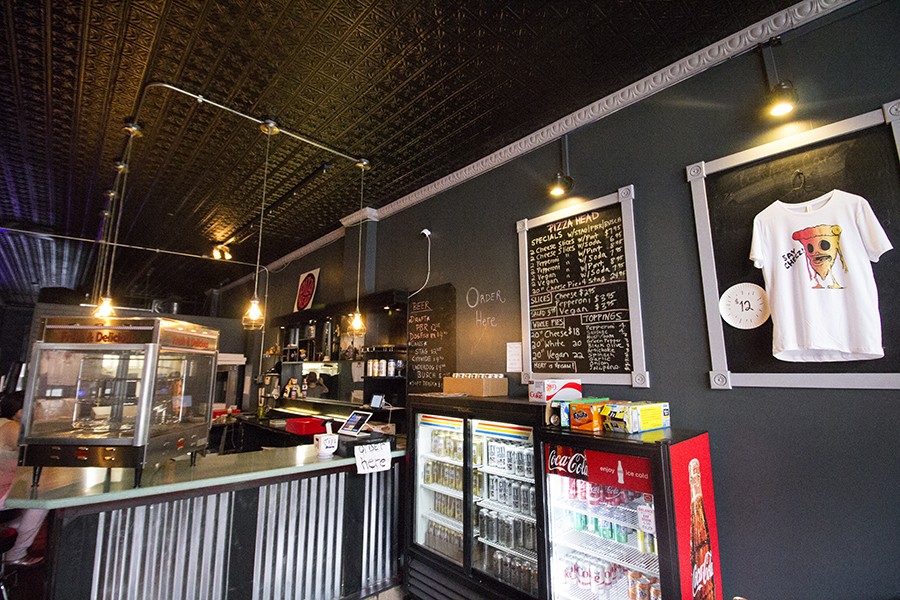 Why anyone would be angst-ridden eating at Pizza Head is a mystery, however, as Sandler has again hit a home run, this time with New York-style pizza so perfect it could bring a tear to the eye of even the most hardened East Coaster. Sandler offers his pies either by the slice or as massive, twenty-inch whole pies, and his menu is small. However, what it lacks in breadth it makes up for in depth of flavor, beginning with a rich, chewy crust that has the subtle tang of sourdough. The crust is puffy around the edges and thin in the middle — not quite as extreme as a Neapolitan pie, but close — and is sliced into triangles the size of a person's face. There's a slight char that infuses the entire pizza with a gentle smokiness, but the badge of authenticity is that Sandler has managed to replicate the glorious grease that gilds a real-deal New York pizza.

It's most apparent on his mozzarella-covered pies. A simple cheese slice, for instance, is everything you want in a pizza — chewy crust, tangy tomato sauce with just a hint of garlic and herbs, and gooey cheese that is so molten it burns the roof of your mouth. It's perfection.

That same cheese serves as a base for Pizza Head's "pepperoni" pie, a vegetarian dish made with a meat substitute that passes muster for even the most devoted carnivore. Unlike so many other faux meats, the pepperoni on offer at Pizza Head is firm and even gets nice and oily like real sausage. Add that unmistakable garlic and paprika spice, and it's shocking how much this offering tastes like a meat-topped pizza.

Both pizzas can alternatively be served with a vegan cashew cheese, which evokes the way powdery Parmesan beads up after it's liberally sprinkled over a bowl of meat sauce. Though it lacks the goo factor you get from mozzarella, the cashew cheese satisfied and serves as a pleasant backdrop for the array of veggie toppings on offer.

For fans of Pizzeoli's "Bianca," Pizza Head offers an equally delectable white pizza (albeit one not offered by the slice). Sandler tops his crust with olive oil, creamy ricotta cheese and so much garlic you'll wear it like a badge of honor for the rest of the day. It needs nothing more to make it worthwhile — the cheesy bread of your dreams. However, at the insistence of a staffer, I opted to add spinach and chopped artichoke hearts and was treated to what is basically spinach dip on a pizza. This, too, is hauntingly good. 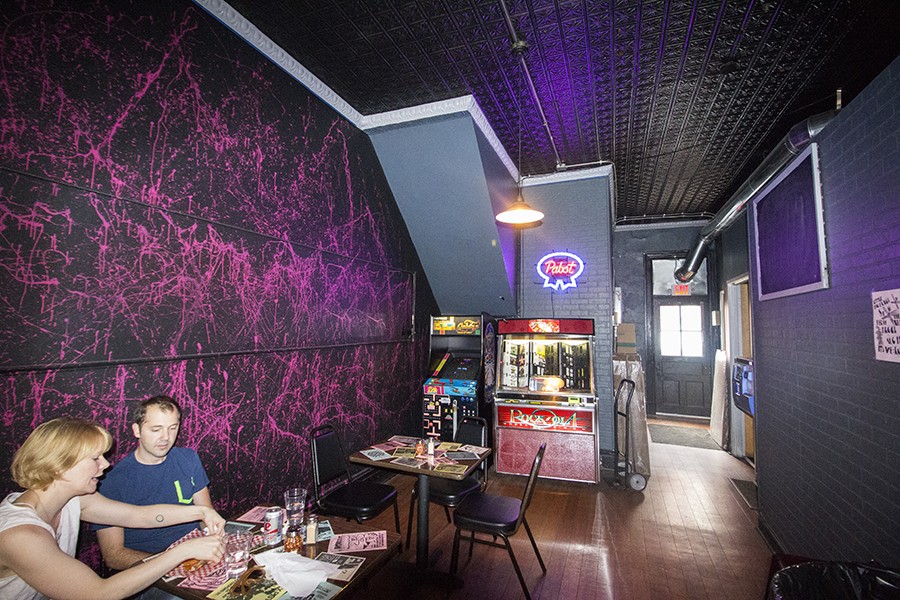 Pizza Head prides itself in keeping it simple. You can grab a couple of slices and a tall-boy of Stag for eight bucks. There are only two types of sauce, two types of cheese and a handful of toppings. Service is fast-casual, you help yourself to water out of an old-school Igloo cooler and the only side dish (unless you count the beer) is a salad of mixed greens, some grape tomatoes and red onions that's served with packet dressing. It's as unfussy as it gets coming from a man who has a reputation for fussing over every last detail.

Yet despite the lack of fuss, Sandler has not really changed his style all that much. He's still serving up some of the best pizza in town — only this time he's doing it to a more raucous beat.