Nearly two thirds (64 percent) of low-income women in St. Louis who Kuhlmann surveyed could not afford menstrual hygiene supplies at some point in the last year. About one fifth of those women (21 percent) said they faced that problem every month.

Kuhlmann’s study, published in February 2019 in the medical journal, Obstetrics and Gynecology, defined period poverty in St. Louis. Kuhlmann serves on the board of Dignity Period, a nonprofit that provides menstrual hygiene products and education to girls in Ethiopia. Period poverty isn’t as profound in first-world countries such as the United States, Kuhlmann says. But that doesn’t mean the problem isn’t here.

“We expected to find some need, but the extent of the need and the magnitude of the need shocked us,” Kuhlmann says.

The key to any real change, she says, can only come through legislation.

Not much has changed for women in Missouri since Kuhlmann’s study was published — and the reason is money.

During her time in the state legislature, Rep. Gina Mitten, D-Richmond Heights, has sponsored five bills all with the same objective: to lower the tax levied on feminine hygiene products to no greater than the tax levied on food. Some of the bills have called for a decreased tax on diapers as well.

Under Missouri law, feminine hygiene products and diapers are not considered “essential goods.” Tampons, pads, liners and cups are taxed at 4.2 percent. The state tax on food is 1.2 percent. The extra tax makes no sense to Mitten.

“These are products required for women to be effective in the workforce and to just live their lives,” Mitten says. “Why is it that women are paying additional sales tax on a product that they need just to get through their day-to-day lives?”

Mitten raised her first child as a single mother. She says she understands how hard it is to make ends meet. “Every little bit counts.”

She started her push to lower the tax on feminine hygiene products in 2016 with House Bill 2483. That bill was referred to a committee and was never brought up again. Mitten proposed three different bills with the same objective during the next three years, but all met the same fate. For each bill, Mitten says, she was given the same reason why it didn’t pass: It’s too expensive. 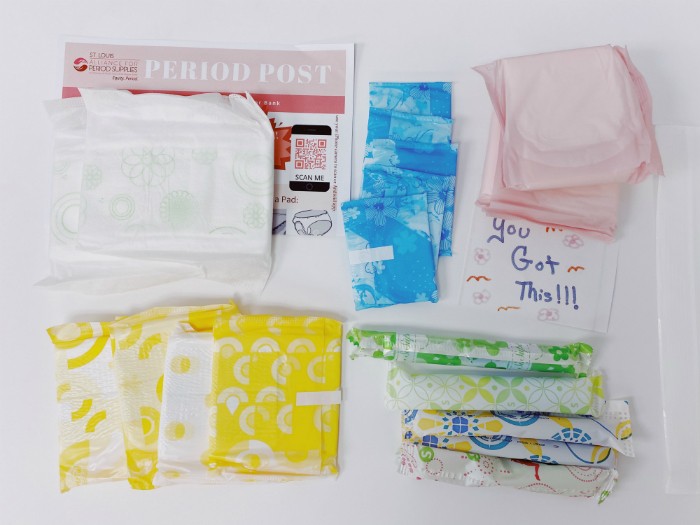 Most bills in Missouri’s House of Representatives come with a fiscal note. It gives representatives an idea of how much the bill will cost the state if it passes. According to the fiscal note attached to Mitten’s most recent bill, the state would lose $17 million to $27 million if it decreased the sales tax on feminine products and diapers.

By national standards, Mitten’s call to lower the tax on feminine hygiene products and diapers by three percentage points is by no means outrageous. Massachusetts exempts these products completely from sales tax. Several states, such as New Hampshire, Illinois and California, require schools to provide menstrual products for free in women’s bathrooms.

Lowering the tax isn’t a partisan issue, according to Mitten. She’s received support from both parties in the past. Legislators just can’t look past the glaring fiscal note.

“These products are to women the same as food is to any human,” Mitten says. “This is not a political issue, it’s an issue of equity and fairness to women.”

It wasn’t until this year, with HB2065, that Mitten’s quest began to make progress.

HB2065 made it further than any of Mitten’s five previous attempts. It was replaced earlier this year with a substitute bill, HB1306, that was sponsored by Rep. Jim Neely, R-Cameron, and called for the same decrease in taxation. This time, the committee voted to move the bill forward, although it failed to cross the finish line before the state’s legislative session ended Friday evening.

Neely — who is running in the August primary for governor — calls Missouri’s unwillingness to pass the bill “backwards.” He cites a bill Gov. Mike Parson signed last year that gave General Motors a $50 million tax break.