Pilot Error: The Muny's Miss Saigon brings the helicopter — but little else 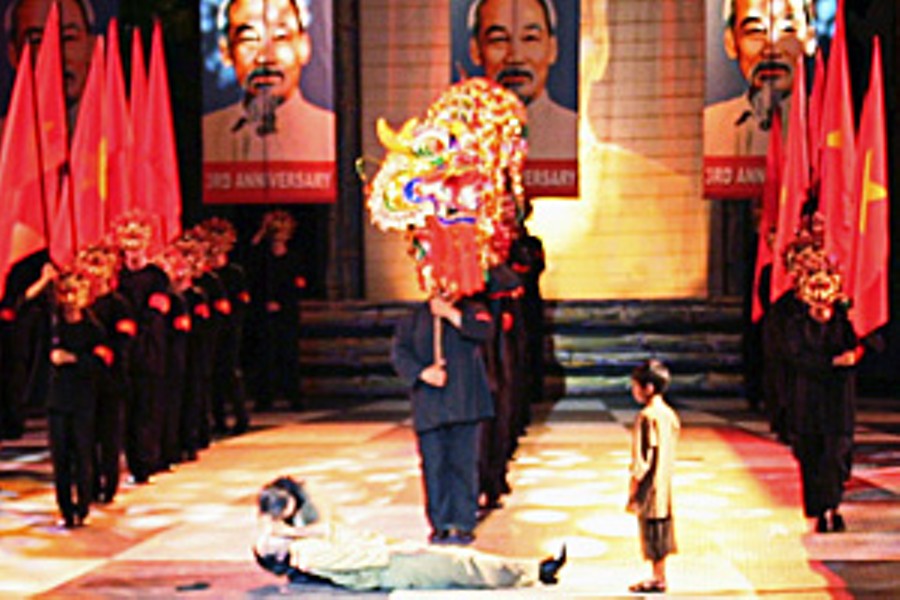 Larry Pry/Muny We hear you: Miss Saigon shouts over much of the beauty that's found in subtlety.

The crowd chatter prior to the opening chord of Miss Saigon touched on only two topics: the heat and a helicopter. At the end of the first act, as the lights splashed on abruptly, an inquiring "helicopter?" fluttered from many and diverse throats. At the end of the evening, when the crowd broke into the Muny shuffle and headed for the parking lots, "helicopter" was uttered again and again with some small amount of satisfaction. Two-plus hours of musical theater under an overcast sky marbled by veins of distant lightning, and the group consensus was: "We saw a helicopter!"

Which is not to slight the Muny audience: That helicopter flyover was something. It had nothing to do with moving the plot forward and it didn't do a thing for the music, but it was a sight — a spectacle, even. "In societies where modern conditions of production prevail, all of life presents itself as an immense accumulation of spectacles. Everything that was directly lived has moved away into a representation." So wrote Guy Debord in 1967, condemning a culture that appreciates the illusion of the biggest bang over an actual explosion of any size.

Alain Boublil and Claude-Michel Schönberg's Miss Saigon is driven by this idea of spectacle as commodity. The music is loud but never melodic, the singing is better appreciated as a kind of vocal pyrotechnics than as music, the costumes are colorful and plentiful and a superfluous helicopter is the most satisfying element of the show. Call me crazy, but the joy of a musical is walking out of the theater humming the tunes, not imitating the rotor wash of a chopper.

But none of these songs were written to be sung by a nonprofessional. They're spectacles, fabricated from equal measures of sheer volume and clunky lyrics and buttressed by endless swells of a constantly flexing orchestra. There's nary a beautiful melody in earshot, nothing worth singing in the shower (even if you had the vocal chops to attempt it). At its worst moments — say, during "The Confrontation" near the end of Act Two — Miss Saigon sounds like two cats fucking in a tin can. At its best moments, Miss Saigon is loud.

The story, which is secondary to the arrival of the helicopter, involves a GI named Chris (the eminently likable Eric Kunze) who falls in love with a Vietnamese working girl named Kim (the powerfully voiced Ma-Anne Dionisio) just prior to the fall of Saigon. The American evacuation (starring a helicopter!) separates them, but Kim's old pimp, known as the Engineer (the captivating Francis Jue), works hard to reunite the lovers for his own gain three years later.

Jue's performance is excellent, combining roguish charm with a generous dollop of oily chutzpah. And almost in spite of the antiseptic nature of the show, director and choreographer Darren Lee manages to have Dionisio and Kunze share one real and tender scene: During "The Wedding," as Dionisio sings, almost quietly, to her ancestors for luck in her marriage, Kunze stands awkwardly to one side, unsure of what to do; he nervously knocks his hair out of his eyes and flashes a sheepish grin at Dionisio's bridesmaids. It's very human, and particularly subtle on the vast Muny stage — and it's mercilessly blown away by an orchestral eructation like so much chaff in the face of a hurricane.

We've got a helicopter to see, and two young lovers experiencing that mysterious blend of fear and bravado just prior to saying "I do" has no place in this spectacle.