Review: Meru Is a Huge Undertaking, But Why'd They Do It?

According to climbing experts, India's Meru Peak — specifically its 20,700-foot-tall central point, Shark's Fin — is considered the most difficult mountain climb in the world. The summit had never been reached by any human until (sorry, but it's impossible to discuss this without giving it away) the 2011 expedition chronicled in the film Meru. Conrad Anker and Jimmy Chin, renowned mountaineers who had worked together for several years, and Renan Ozturk (a relatively new member of their team), first attempted to scale Shark's Fin in 2008. Mid-climb, they were thrown off schedule by a storm that left them unable to move for several days. Despite this exhausting most of their supplies, they persisted for almost two weeks longer than their original plan. They were ultimately forced to retreat just 100 meters away from the peak.

Three years later they returned for another try, despite Ozturk suffering a severe skull fracture and spinal injuries in an avalanche a few months prior. This time they succeeded in reaching the top, a feat which has yet to be repeated.

Meru, based on footage Chin shot on both expeditions, is filled with predictably breathtaking scenery, a lot of candid footage and a small amount of background material that tells the viewer more about the personalities of the three men than about the details of mountaineering. This, I suspect, is a film for the fan base, like the surfing and skiing films that pop up at private screenings from time to time. The story is not without interest (and more time is spent on the failed expedition than on the final victory, perhaps because it's more dramatic), but it's not much more than a lot of home video — very high-quality home video, admittedly — patched together with talking-head interviews and influenced editorially by the bombast and bad habits of reality television. This is a film in which we hear people talk about things they did as often as we actually see them in action. 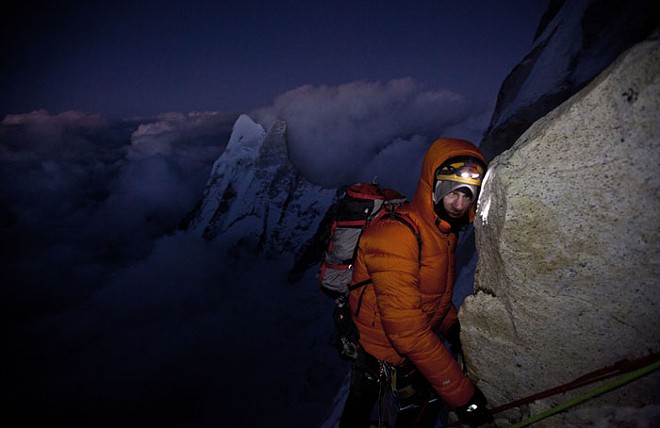 Though it in no way diminishes the achievement of its subjects, Meru is one of many recent documentaries which tries to establish the importance of an event merely by talking about it from all directions. If, like me, you don't know much about climbing (the "because it's there" attitude has never really seemed much of an explanation), you aren't going to learn it here. And like other recent "great event" films, the things we see in the film are countered by the many things that remained unmentioned. What is all that equipment, and what did climbers do centuries ago before they had all of the high-tech tools? Is rock climbing a real profession? Who's paying for all of this? (The answer to that last question, as it turns out, is the sports retailer the North Face).

The makers of Meru (climber Chin and his wife) aren't really interested in helping the viewer understand how or why the men succeeded; they just want you to cheer them on.