MABEL SUEN Parm's meatball sandwich is perfection of the form.

If you walk into Parm Pasta & Sandwich Co. and order a salsiccia sandwich with a side of mostaccioli, there is a good chance no one will know what you mean.

"One sah-zeetz-uh and a muskacholi," co-owner Diane Maijala calls out to her father, Salvatore D'Ippolito.

"I hear you, sah-zeetz," D'Ippolito yells back, leading you to wonder whether Don Corleone himself is cooking up the sandwiches in the back of this tiny Cherokee Street storefront.

That St. Louis-Sicilian-Italian dialect isn't only on display in the language. It's also evident in Parm's style of Americanized Italian food, with all of its cheesy-baked, sweet-red-sauce-smothered glory. Maijala and D'Ippolito are more concerned with how much Provel they can cram onto their house salad than whether their food qualifies as "authentic" — unless your definition of authentic is what Nonna cooked at her home kitchen on the Hill. 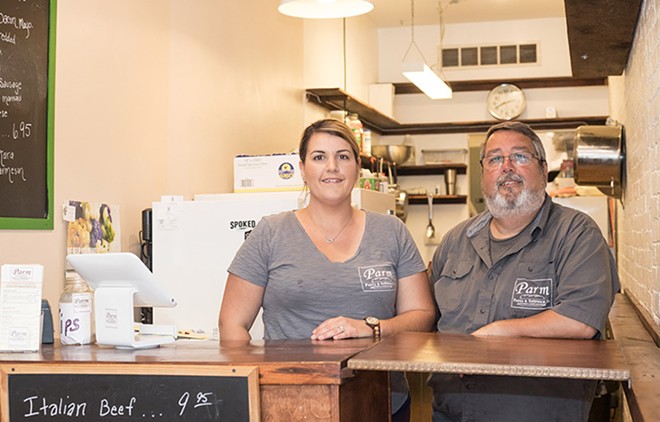 And that's OK. As the father-daughter team proves, there is a time and a place for unapologetic Americanized Italian comfort food, cuisine that, if not invented by, was certainly popularized by their family's business, Cunetto House of Pasta. D'Ippolito, who is the nephew of Cunetto's founders, got his start in the restaurant industry working at the popular Hill mainstay before branching off on his own with an Italian-American eatery in Lafayette Square in the 1980s.

After a hiatus from the industry, D'Ippolito decided to join forces with his daughter, who had spent her career in the medical field. They knew they wanted to do something small scale and casual and scouted locations around Soulard before settling on the micro-storefront on Cherokee Street that used to house Teatopia, and the Little Dipper before that. 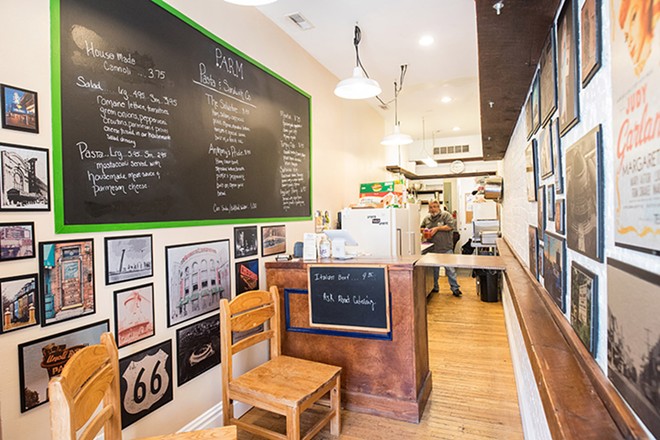 If you ever patronized either of the building's former tenants, you'll know what I mean by "micro." Parm is so small that a person of average height could stretch out their arms and nearly touch both walls. At 300 square feet, there is no room for indoor tables; in fact, there is barely room for the two chairs that sit to the side of the order counter. If more than three customers decided to patronize the place at the same time, the line would stretch out the door. It's so small it's almost dizzying.

The restaurant may lack physical space, but it is big on St. Louis charm. The cream-colored walls are covered in photographs and memorabilia, a visual representation of the city's history. From a framed sketch of the Weatherbird to a photo of the massive Amoco sign that towers over the intersection of Skinker Boulevard and Clayton Road, Parm is steeped in the sort of nostalgia that makes you proud to be from here. 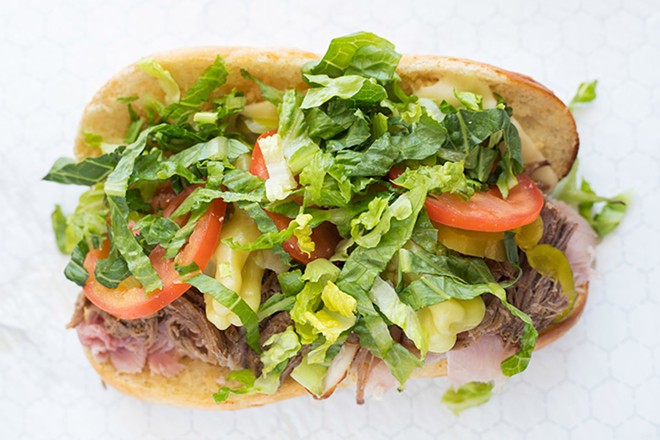 That nostalgia is not just evident on the walls. Granted, your Italian cousins visiting from Florence might scoff at what Parm bills as Italian, but it's St. Louis Italian in the way that Maull's soaked pork steaks are barbecue and Imo's is pizza. The "Anthony's Pride" is emblematic — basically a Gerber sandwich that someone looked at and said, "Hey, this needs roast beef." Heaps of shaved ham and roasted beef are piled onto cheese garlic bread that becomes so gooey thanks to the melting Provel that you'll wonder if it's actually a sauce. Lettuce, tomato, pickles and pepperoncini garnish this monstrous wonder, their presence cutting through the richness. It also makes the sandwich a bit soggy if you wait too long to eat it — not that you'll want to. After watching them prep this lovely concoction, you'll be lucky if you make it past the patio tables out front.

The "Salvatore" might as well be called "What the Hill Tastes Like." Piles of ham, salami and cappicola compete for space on the crusty French roll with Provel, lettuce and tomato. Zesty "special sauce," which tastes like an Italian vinaigrette, dresses this beauty, adding a zing of acidity to the fatty meat — and somehow, in this case, it does not make the bread soggy. When you crave an Italian deli sandwich, this is it to a T. 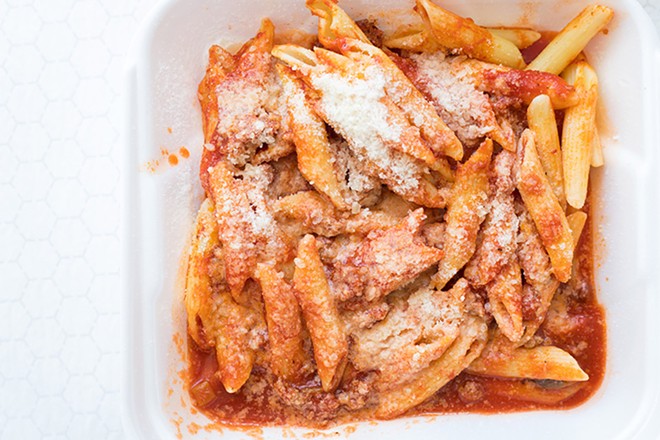 I have never seen a turkey sandwich as large as Parm's turkey club; there has to be at least a pound of meat on it, and that doesn't include the generous portion of bacon that accompanies it. Simply adorned with lettuce, tomato and Provel, it doesn't break the mold; it shows you why the mold was made in the first place.

It's basically impossible to execute an eggplant Parmesan sandwich without having it become mushy, and the texture on Parm's version does have that problem. However, as the breaded eggplant breaks down and mingles with the sweet tomato sauce and Provel cheese, it becomes a delectable, gooey spread that soaks into the interior of the bread while the exterior remains crisp. It's a mess of a sandwich, but it is a delicious mess.

Parm's housemade meatballs are perfection of the form: tender, flecked with parsley, garlic and breadcrumbs and so well cooked they all but melt in the mouth. Piled onto crusty bread and slathered with simple tomato sauce, you'll want nothing more in a sandwich — well, you'll want to ask for the optional cheese on top to make this into a meatball Parmesan. It's flawless. 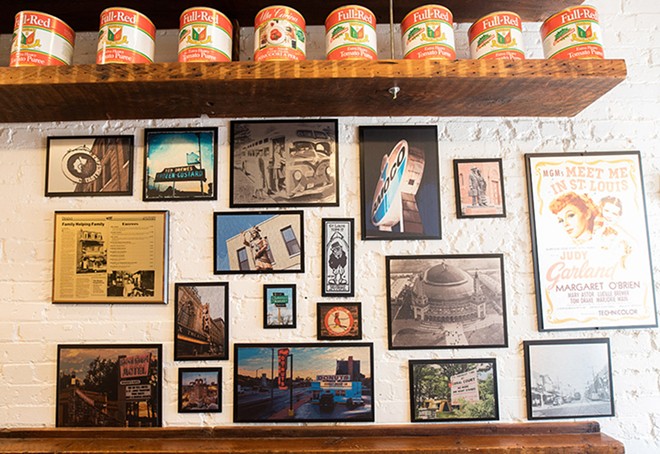 I'm not sure which there was more of on Parm's salad: croutons or cheese. Lettuce was but an afterthought, a way to make you feel less guilty about eating deep-fried bread and cheese tossed in vinaigrette — basically a south-side panzanella. The dressing breaks down the Provel and mixes into it, becoming a creamy garlic sauce. You probably need to have been born within KMOX's broadcasting range to enjoy such a concoction, but if you were, it's a nostalgic St. Louis treat.

It's not the most St. Louis thing on the menu, though. That award goes to the mostaccioli, tubular-shaped noodles tossed in a meaty tomato sauce that tastes as much like a south-city wedding reception as Busch on tap. Again, pasta drowned in meat sauce is not a complicated dish, but the rich sauce, al dente noodles and generous dusting of powdery Parmesan cheese makes for pure comfort.

Those maraschinos no more resemble cherries that come off the tree than the meat sauce on Parm's mostaccioli resembles a classic Bolognese. But when you find one of those cherries at the bottom of your drink, dammit if you don't enjoy chomping into that syrupy fruit. Sometimes, it's even sweeter than the real thing.