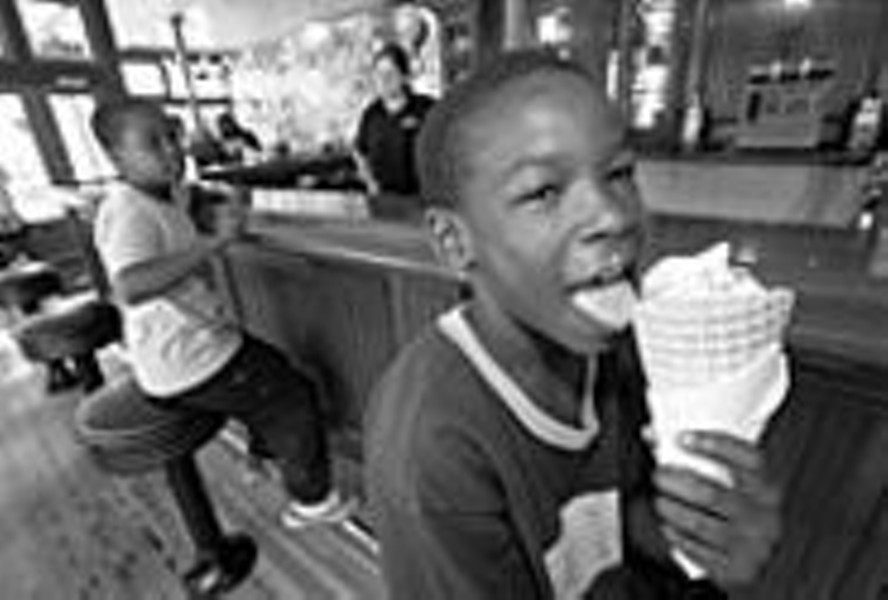 Jennifer Silverberg We all scream for ice cream: Ra'Heam Hudson (background) waits for a cone as Ryan Moore (foreground) enjoys his.

I respect urban homesteaders, especially restaurateurs who believe in St. Louis neighborhoods passionately enough to take on the big gamble of opening establishments in areas most residents would write off as hopeless dens of decay.

That's why I like the idea of the Mangrove Cafe and Ice Cream Parlor, situated in that odd little wedge between Highway 40, Vandeventer Avenue and Kingshighway known as Forest Park Southeast. Back in the 1850s, this was St. Louis' first "subdivision." Over the years it became a difficult area, replete with all of the socioeconomic problems that face many urban neighborhoods, including the fact that half its residents live below the poverty level. But recently, several factors have turned the neighborhood around, including a massive investment by the Washington University Medical Center, construction on the part of Habitat for Humanity and an influx of urban homesteaders taking advantage of a diverse housing stock.

Four years ago Mangrove owner Guy Slay (yes, that Slay family; he's the mayor's cousin) purchased several scruffy-looking buildings along Manchester near Tower Grove Avenue, including the one he renovated for his new restaurant. With the addition of the Mangrove, that corner is now home to a quartet of businesses: JaBoni's Bistro, the Ujamaa Maktaba Bookstore and the Potter's Workshop.

Driving by on Tower Grove during the past year, I've watched Mangrove's slow transformation from a boarded-up eyesore to an attractive space filled with windows and dark woods. I wondered how well such an endeavor might actually do in the area, but after several visits, including one just for ice cream, the prognosis looks good. The Mangrove has some food and service issues to work through, but Slay may have hit upon just the right combination of family-friendly restaurant and old-fashioned soda fountain.

Right in front of the restaurant's entryway sits a giant, lighted, rotating ice cream cone -- in its own glassed-in enclosure, no less -- beckoning you inside to partake of some Cedar Crest ice cream. Mangrove is the only establishment in Missouri that serves up the super-rich, high-butterfat treat made in Manitowoc, Wisconsin. (For more on this treat, see Side Dish on page 48.) Once inside, you can head straight for the long, wooden ice cream bar and plop your rear down on one of the well-spaced stools. Or sit in the little dining area that overlooks Manchester Avenue. (The mural of St. Louis landmarks that takes up the entire east wall of the room, however, is far more interesting.) Or eat in the larger dining room amid reproduction photos of the World's Fair and lifelike oil paintings of St. Louis scenes by local artist Dexter Silvers (whose studio is down the street).

Anyone who has sunk this much money and effort into resurrecting a shabby building in a dilapidated part of town must love the city. And it is an exquisite rehab: pine floors refinished to mirror-like gloss, impossibly high ceilings that recall their former grandeur and that ice cream bar dividing the dining areas, which rivals what you'd find in a saloon (the Mangrove serves no alcohol).

It might be tempting for a restaurant dishing out exclusive premium ice cream to offer an otherwise bare-bones menu. But Slay and his cousin and general manager John Slay, along with chef Darrin Conarroe (formerly of Yemanja Brasil and Frazer's), have put together a menu that is at once basic and varied enough to satisfy even those who didn't come for a cone. Granted, the appetizer list -- chicken fingers, crab Rangoon, toasted cannelloni, nachos, etc. -- is predictable. The calamari was too heavily breaded and probably of the frozen variety, but at least it wasn't overdone to the point of vulcanized rubber. Of course, there are chicken wings, but the thin tangy hot sauce makes them worth the effort.

There's a full range of sandwiches, including a roasted portobello with buffalo mozzarella, a chicken Parmigiano, a turkey club wrap and a creation loaded with Volpi meats that's served on foccacia. The "Guy's Burger" is hand-pattied and grilled until nicely crisp around the edges and served on a toasted bun. Kids will like the jumbo hot dog and grilled-cheese sandwich. Pastas and pizzas are available. You can mix 'n' match your noodles -- including farfalle and tri-colored cheese tortellini -- with three fresh sauces (Alfredo, marinara, pesto). Pizza is, of course, thin crust, St. Louis-style. Would you expect any different?

Entrées may seem at first glance, um, boring, along the lines of Applebee's. You've got your basic chicken Marsala, meat loaf, strip steak, barbecue ribs, Dover sole and a mixed grill of chicken, Italian sausage and blackened beef tips. All are served with basmati rice and mixed seasonal vegetables. Hold on. Basmati rice? Dover sole? Mixed vegetables that boast not only the expected broccoli, onions, carrots and mushrooms but also bits of eggplant and sun-dried tomatoes? Slay's Mediterranean lineage is showing through, and it's a pleasure to behold.

Such subtle touches put Mangrove a step above the casual fare one would expect at a family-friendly soda fountain. The menu reminds me of Tanner B's, another casual restaurant in south city that offers basic fare with a few surprising flourishes. Medallions of meat loaf were a just-right mix of beef and pork, but what really got this dish going was a cumin-spiked sauce that tweaked the palate in just the right place. They were out of garlic mashed potatoes, but a baked sweet potato was offered instead, which was fine. Barbecue ribs were the thick, meaty "St. Louis style," and were grilled rather than smoked. They were nonetheless tasty right down to the bone, with a spicy-sweet sauce that did double duty as a condiment for the side order of sweet-potato fries (a pleasant-enough departure from the customary carpet of white bread). The only blot here was that our server brought the entrées only a few minutes after our appetizers had arrived, a flaw that was again in evidence on a subsequent visit.

The sole was the most satisfying dish of all: a fresh, flaky pan-seared fillet topped with a white wine-caper sauce that uplifted but didn't overpower the moist fish. Far less satisfying was a gloppy sauce on the chicken Marsala that suffered from some serious overthickening. Garlic mashed potatoes, available this time around, were odd-tasting; the only description we could come up with to describe them was "funky" (which may emanate from Conarroe's addition of pan-roasted paprika). Then again, we'd started the meal with a terrific Caesar salad, whole segments of romaine topped with the tangy trademark dressing and accompanied by an ersatz side of bruschetta: two slices of toasted baguette piled with red onion, kalamata olives and diced tomato.

Diners unaccustomed to city living may not be of a mind to take on the role of urban explorer, especially when it involves an appearance by a mumbling woman in a pink terrycloth sweat suit who visits several tables before being escorted out. And yes, there are those of us at the other end of the spectrum who are concerned about the gentrification of any neighborhood. But especially in this polarized city we live in, it was heartening to look around Mangrove and see blacks and whites, gays and straights, couples and families enjoying an evening out. That's what any restaurateur could only hope to expect under the best of circumstances.