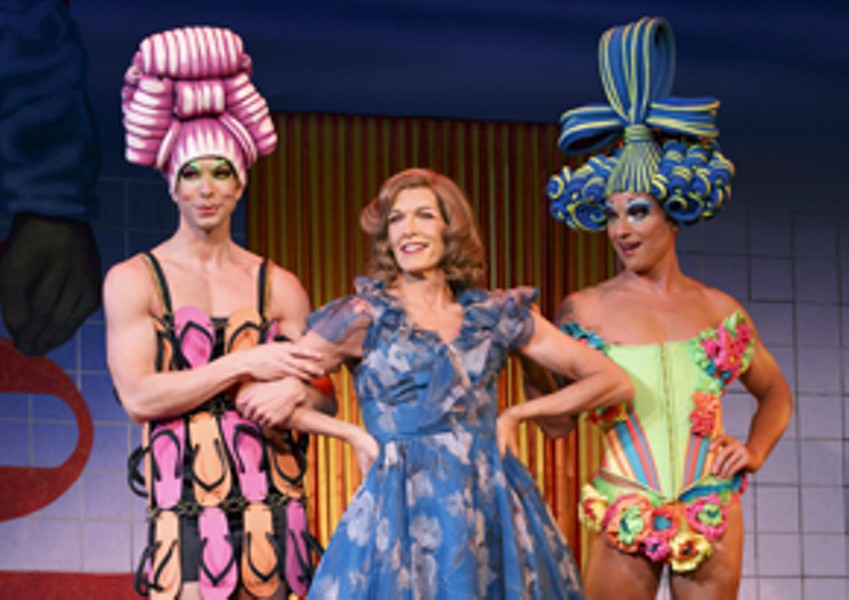 Heat is not kind to the elaborately made-up complexions of drag queens. So why would a drag queen go to the desert for a face melt, you ask? The deliciously epic musical Priscilla Queen of the Desert, based on the 1994 Australian film, tells all glitter-drenched answers and more. Main queen Anthony "Tick" Belrose, or Mitzi Mitosis by night, agrees to work a resort show for his ex-wife miles away in the middle-of-nowhere Alice Springs, Australia. In a gasping-hand-to-mouth plot twist, she reveals on the phone to him that his eight-year-old son would very much like to finally meet his father. Tick gathers up a couple of gutsy friends, another queen and a transsexual, and off they go into the scorpion-and-snake-infested Australian countryside. Along the way, their travel bus -- named Priscilla -- breaks down, they meet a handsome and helpful mechanic, pull off a great Madonna lip-synch and are faced with hatred, vandalism and danger. Their wits pull them through, and after the arduous journey, realize they cannot part from one another. The triumphant story of Priscilla Queen of the Desert opens at the Fox Theatre (527 North Grand Boulevard; 314-534-1678 or www.fabulousfox.com) at 8 p.m. Tuesday, January 29. The show continues every night except Monday through Sunday, February 10. Tickets are $25 to $62.
Tuesdays-Sundays. Starts: Jan. 29. Continues through Feb. 10, 2013