The Marriage of Figaro

Music by Wolfgang Amadeus Mozart. Libretto by Lorenzo Da Ponte, English translation by Andrew Porter. Directed by Mark Lamos. Presented through June 29 by Opera Theatre St. Louis at the Loretto-Hilton Center (130 Edgar Road, Webster Groves; 314-961-0644). Tickets $25 to $129.
Ah, The Marriage of Figaro! Mozart’s comedic masterpiece has been performed around the world pretty much nonstop since 1786. It’s the gleefully giddy story of a servant who wants to wed, but finds endless complications thanks to his boss’ illicit designs on his beloved. Even if you know nothing of opera and nothing of its plot, its overture is surely familiar to you. It’s entered the canon of pieces that your ears somehow just pick up along the way of life. “I know that,” you will think. “It’s gorgeous.” Indeed you do, and indeed it is.

Nothing has been modernized in the Opera Theatre St. Louis’ first-rate new Figaro; there’s no attempt to transpose the action to, say, the swinging ‘60s or the give things a noir cast. But the playful costumes (by Constance Hoffman) and clever sets (by Paul Steinberg) nevertheless provide a wink, owning the artifice of the day and subtly reminding us that we, too, have our powder and weaves.

The libretto offers conflict that’s both ridiculously complicated and swiftly resolved, with all the usual bits — jealous lovers, elaborate deceptions, characters switching identities and genders, frantic hiding under beds and jumping out of windows. These conventions still amuse, and even though a three-hour and ten-minute run time is long even by opera standards, director Mark Lamos keeps things moving. 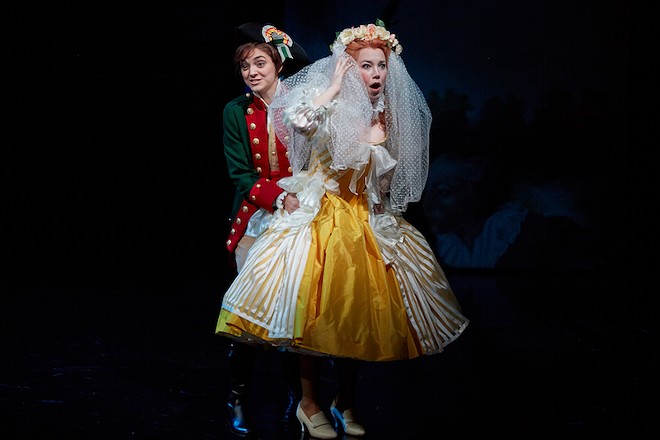 But it’s soprano Susannah Biller, who plays Almaviva’s wife, Rosina, who steals the show. When she first appears on stage the frantic action comes to a screeching halt, so languorous is her aria, so devastating her affect. You stop laughing and instead hold your breath. She is the tragedy in the middle of the comedy, the reminder that the foibles of men like her husband have a very real cost.

Even with Biller’s powerhouse performance, you don’t linger on the tragedy. How could you? Everyone is around you is laughing out loud. (It’s remarkable how well the humor holds up 233 years later; perhaps we haven’t come such a long way, baby.) But as she sings, so beautiful and so desperately sad, you can’t help but be riveted.

It’s Rosina, along with Figaro’s beloved Susanna (Monica Dewey), who sings “Canzonetta sull’aria” in the third act, and you might be familiar with this piece, too. In The Shawshank Redemption, it is this duet that Andy plays over the loud speakers, an act of defiance that brings the prisoners to a standstill and causes Red to remark, “I have no idea what those two Italian ladies were singing about. …. I like to think they were singing about something [so] beautiful it can’t be expressed in words and makes your heart ache because of it. I tell you, those voices soared. Higher and farther than anybody in a gray place dares to dream.”

That is reason enough to see The Marriage of Figaro, even if you’ve seen it before, even though you can find recordings of that duet online. If you thought it was stunning coming from the prison speakers, it’s even better live. Opera almost always is.