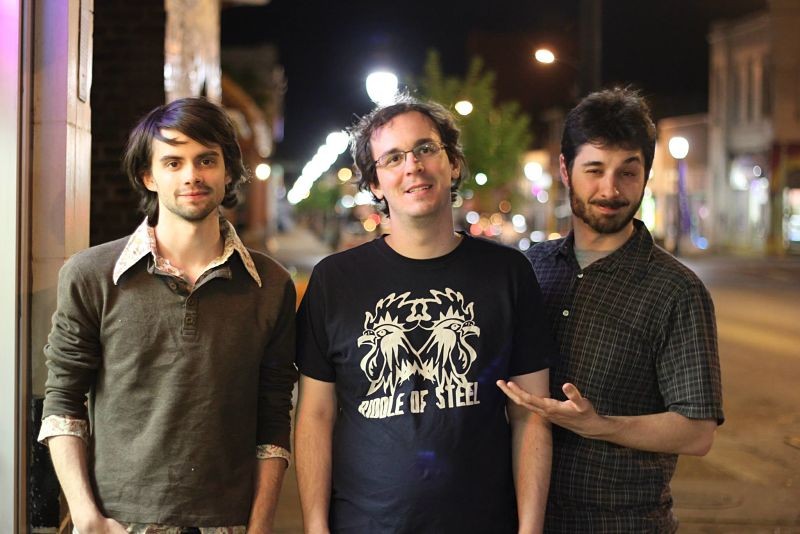 Jeremy Goldmeier and Bob McMahon are life-long friends, former college roommates and, in Other People, co-leaders of a pop-leaning rock trio. Yet despite these many connections, the two approach songwriting from different angles. McMahon writes slightly detached narratives built around smart, unflashy guitar patterns, while Goldmeier's forceful piano and emotive delivery suggest a more theatrical direction.

On the just-released Other Songs, these bandmates don't so much split the difference as run in diverging directions. "Some people say we're two bands in one, and it's hard to disagree on some level," says McMahon, who is also an occasional contributor to the Riverfront Times.

"Bob and I have known each other since we were infants," says Goldmeier. "We went to preschool together, and we serendipitously wound up going to college together — we wound up in the same dorm and eventually wound up in the same dorm room. We formed this musical hive-mind where we listened to the same stuff and shared records with each other. So that informs everything we do, I think. The sensibility is very similar between the two of us even though we have different approaches to it.

"There's a bit of telepathy there that comes from knowing someone for so long," continues Goldmeier. "When we're collaborating, we bring the songs mostly complete to the group, but there is a collaborative element there; we know each other and are able to enhance what the other does."

"We've always been best friends so it just seemed natural to do this once he started playing music and we started playing together," says McMahon. At first the duo began gigging around town and playing open mic nights — then, as now, each member would handle drumming duties when the other was singing lead. Goldmeier notes that, as a pair, they had "a rather thin" sound. Enter A.J. Lane on bass, who serves not only as the connective tissue between a band with a rotating drum throne but as producer and engineer on these dozen tracks. His melodic bass runs give some power-pop body to songs like "Truth and Beauty" and "The World May Change," two Goldmeier compositions that close the album with some of the bounce and verve found on the first few Ben Folds Five albums.

As Mizzou students in the early 2000s, McMahon and Goldmeier bonded over some of the rising stars of indie rock — Spoon, the Shins, Of Montreal — as well as legacy acts like the Kinks and Elvis Costello. Goldmeier credits those last two artists for "the observational stuff, the wry sense of humor" that comes through on Other People's songs.

One of McMahon's contributions, "Medical Benefits," most clearly fits that mold, presenting a story-song of class, sex and vice in the manner of Squeeze or XTC. "I remember reading some article once about med students in Britain who were paying their way through school with prostitution," recalls McMahon. "It sounds pretentious, but it seemed like a juxtaposition of the high and low of society — I just thought that was an interesting thing to write about."

The track stands out as Goldmeier's favorite McMahon-penned song on the album. "I think it's a different sound for us. When he first played it for me I thought of Elvis Costello's Imperial Bedroom. I could imagine it being orchestrated and having a tympani in there. It has a different feel from a lot of our material in general — it's a little more herky-jerky and intricate rhythmically."

The tracks on Other Songs date back several years — initial recording for the album began more than two years ago, and was completed in fits and starts. Several of Goldmeier's songs date from his stint as a journalist at a daily newspaper in Abilene, Texas (he returned to St. Louis in 2012). He wrote songs on a hand-me-down keyboard in his spare time, and the culture shock of working in what he calls an "arch-conservative town" added grist to his lyrics.

"A lot of those songs came from generally being dissatisfied and alone — the emo stuff," Goldmeier says with a laugh. "I felt like a fish out of water and I had a lot of pent-up creative energy and frustration that fed some of those songs. How do we as individuals influence the societal whole? That probably came from that general mood."

Other People plans on gigging more aggressively in 2017 than in years past and seems to have no shortage of material for another full-length. McMahon and Goldmeier's relationship all but guarantees more new songs.

"There is definitely a friendly rivalry that has been there since the earliest days of the group," says Goldmeier. "Bob will send me something and I'll want to top it. I'm sure the feeling is mutual."

Listen to Other Songs below: