Orson Welles' Lost Film, The Other Side of the Wind, Is as Great as He Promised

COURTESY OF NETFLIX John Dale and the Actress (Robert Random and Oja Kodar) in the film within the film.

The Other Side of the Wind

Directed by Orson Welles. Written by Oja Kodar and Orson Welles. Starring John Huston, Robert Random, Peter Bogdanovich and Susan Strasberg. Premiered on Netflix November 2.
The year is 1970. Old Hollywood — the Hollywood of studios, stars and cigar-smoking moguls — is gearing up for a confrontation with New Hollywood, an amalgam of European new waves, cinéma vérité, underground movies and who knows what might come next. The old guard has seen Bonnie and Clyde and 2001 and The Graduate and Easy Rider and they know something’s happening here but they don't know what it is. Orson Welles, aging enfant terrible and pariah, begins shooting a film about this new cultural battlefield. Using whatever production resources he can get his hands on (mostly the blood, sweat and tears of a small band of loyal volunteers), he begins filming his satirical view of the cinema at an impasse.

Years go by. Money runs out. Lawsuits are filed. The film's fortunes soon become entangled with the fall of the Shah of Iran. Reporters who claim that Welles never finishes anything and that the film was never more than a pipe dream begin to gloat.

The story of the film's troubled history is told with wit and depth in They'll Love Me When I'm Dead, a documentary premiering on Netflix and directed by Morgan Neville, of 20 Feet from Stardom and Won't You Be My Neighbor? It debunks many of the Welles myths and places the film within the context of 1970s Hollywood.

And now, almost 50 years since production began, and 33 years since Welles' death, also premiering on Netflix is something called The Other Side of the Wind. The credits say it's an Orson Welles picture — the picture, the movie he shot from 1970 to 1976. But is it?

Of all the efforts to reconstruct or restore Welles' work since his death, this feels most like the real thing. It’s a 98 percent accurate approximation of a film that was meant to be seen as experimental and incomplete. And here's the real surprise: It's a great, crazy, unpredictable film, as innovative and provocative as Welles always said it would be.

The Other Side of the Wind is the story of Jake Hannaford (John Huston), a Hemingwayesque filmmaker of the old school beleaguered by failure and betrayal. His comeback film — also called The Other Side of the Wind — is in danger after his latest discovery walks off the set. His career rests on getting the town's current favorite son and another former protege, Brooks Otterlake (Peter Bogdanovich playing Peter Bogdanovich), to come to his aid.

The majority of the film is a long semi-improvised party scene filmed in multiple formats and over several years (you can even spot Rich Little, who worked with Welles for three weeks before abandoning the project and being replaced by Bogdanovich), as Hannaford celebrates his 70th birthday at the home of glamorous Dietrich surrogate Zarah Valeska (Lilli Palmer). Hannaford is surrounded by film-school acolytes, New Hollywood celebrities (Dennis Hopper, Claude Chabrol, Paul Mazursky) and a small army of hangers-on and friends (including long-time Mercury Theatre veterans Norman Foster, Mercedes McCambridge and Kane's butler Paul Stewart), all of them functioning as revolving Greek choruses assessing the state of the director's reputation, pocketbook and psyche. (In a moment of panic, an adviser warns, "Five of our best biographers have just gone over to Preminger!") 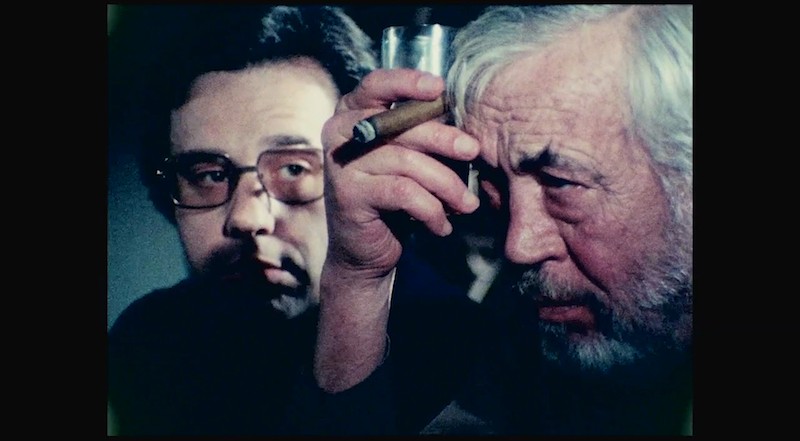 Over the course of the evening are boasts, accusations and a few sharp digs at Robert Evans, Pauline Kael, Cybill Shepherd, academia and other Wellesian bête noires, along with a screening of Hannaford's work in progress, a bit of elliptical erotica involving an exotic young woman (Oja Kodar, who co-authored the film) and a muscular bike-boy. (Many commentators see the film-within-a-film as a parody of Antonioni, but its over-the-top combination of Vogue-style poses and Playboy fantasies reminded me more of the soft-core chic of John Derek.)

There are some familiar Welles trademarks — shadowy settings and severe backlighting, the waves of conflicting voices and contradictory commentaries all circling around a powerful and not entirely savory personality. But there’s also a great deal that breaks away from anything Welles (or any filmmaker) had ever done before. (Dennis Hopper's equally self-destructive 1971 The Last Movie, also getting a belated rediscovery in November, may be the only thing that comes close.) It's argumentative, aggressive, brutally bare and in some places — fireworks! dummy shooting ranges! — just plain crazy.

In the last fifteen years of his life, when he made The Other Side, F for Fake and a few short documentaries about his earlier films, Welles embraced the image of the magician, the man who juggles bits of film through a Moviola and produces images and dreams. Though he bridled at the obstacles that kept his film from completion, he also once said that the duty of an artist was to find the point of maximum discomfort, to search it out. Thirty-three years after his death, the old wizard has pulled off an amazing trick, turning a legendary failure into a brave, raw and inimitable work of genius.