The moment you walk into Original J's Tex-Mex & Barbecue, you wonder if you may have mistakenly stepped inside an annex of the adjacent dive bar, Krueger's. The place is covered in wood paneling — the retro kind that lined the basement walls at your friend's parents' house where you'd spend hours listening to Mother Love Bone and exhaling cigarettes through a dryer sheet. Vintage stained-glass chandeliers that appear fogged from years of smoke hang from the ceiling, while framed pictures of waterfowl and Waylon Jennings decorate the dining room. In the corner, an old Catch a Duck machine beckons young'uns and an old-school sit-down-style Ms. Pac-Man game, complete with burgundy pleather chairs, appeals to the young and nostalgic alike.

If you were to conjure a scene that is the polar opposite of Mike Randolph's beloved South American-inflected Público, it would be Original J's. The former, an upscale restaurant that closed in December 2018, was positively sultry; the way the flames from the wood-fired grill flickered across the stylish bar and dining room set a date-night mood. Original J's, by contrast, is the place you take the kids to be loud and shovel down platters of barbecue and cheese-covered carbs.

On its face, then, his latest venture, which he opened with his wife, Liz, this past November, appears to be a pivot from the world of fine-dining toward a more casual, family-friendly concept. Such a move conveniently fits the storyline of the couple's small restaurant empire: Their fine-dining restaurants Público, Randolfi's and Privado have all closed; both locations of their casual breakfast and lunch spot Half & Half remain open. Randolph would admit as much himself, noting the difficulties associated with sustaining a fine-dining establishment over the long term and the industry trend toward more low-key spots.

However, if you look beneath the surface, there is a distinct thread that connects Original J's to these former fine-dining restaurants. There's the way Randolph uses smoke and coaxes flavors from different chiles, just as he and his team did at Público; there's the science behind the equipment and the techniques he experimented with at Privado. Wood paneling aside, Original J's should not be seen as a departure from his fine-dining background; it's an extension of it. 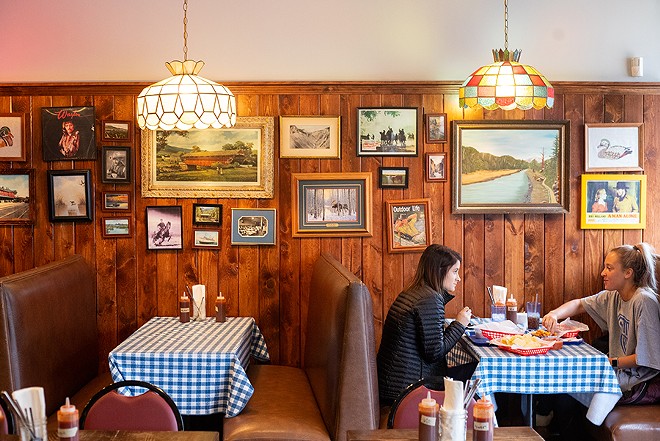 Understanding this, you get your answer to the question posed every time another barbecue spot opens in the St. Louis area: Do we really need another one? And the answer is that it depends. If you approach the question from a sheer numbers point of view, you see a barbecue scene that is mighty saturated. However, if you believe that there will always be space for a place that is not only delicious but offers an interesting approach to the art and science of smoked meats, then there is more than enough space for Original J's. 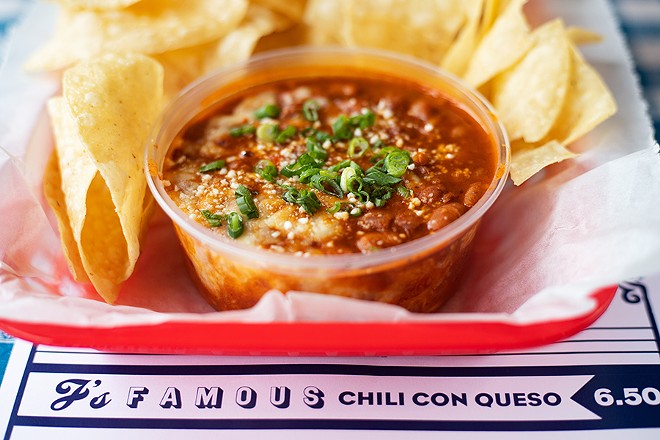 Randolph, of course, does not want to scare people away with talk of fancy cooking techniques and the quality of proteins he sources. These are foregone conclusions at Original J's, while the forward-facing part of the business is pure Tex-Mex comfort. Out of the gate, dishes like J's Famous Chili con Queso show the restaurant's inclination toward fare that is both approachable and of high quality. The cheese sauce is the velvety consistency you get from ballpark nachos, but without any of the artificial flavor. Flecked with green chiles, the cheese is smothered in a rich brisket chili. When stirred together, the components meld into a decadent, mildly spiced concoction.

Taquitos evoke the ease of bar food, but in place of bland ground beef, the miniature fried cigar-shaped shells are filled with rib meat that has the velvety texture of pork rillettes. The dish would be overly rich, but Randolph smartly pairs the taquitos with a side of zesty guacamole that cuts through the fat.

Chicken wings are like the sweet and spicy guilty pleasures you get from the grocery store hot-wing bar — only grown up and infinitely more refined. The plump flats and drummies have a gentle smoke that is amped up by fiery arbol peppers, but dialed down with a lime and agave glaze. It's a beautiful balance.

You can get guacamole at Original J's, but the tomato and avocado salad is a more unique and bright way to enjoy the creamy green fruit. Huge hunks of avocado are tossed with tomatoes, red onions and cilantro in a mouth-puckering lime vinaigrette that is a refreshing contrast to the decadence that peppers other dishes.

Like at Público, Original J's devotes a section of the menu to tacos such as a wonderful pulled pork that is so succulent the meat's juices drip down your hands when you eat it. The rich meat is balanced with fresh guacamole and piquant salsa verde. I expected the pork to be juicy; I was shocked that a pulled chicken version was even more so. A riff on al pastor, the chicken is dressed with a pineapple-habanero salsa, its spiced juices infusing the meat with a vibrant tropical jus.

In addition to the standard handheld tacos, Original J's serves a knife-and-fork Tacos Norteno. Here, a corn tortilla is layered with shockingly succulent brisket, molten cheese, tomato salsa, onions and cilantro like a haute version of seven-layer dip. If this were served at Super Bowl parties, I'd start watching football.

Randolph also uses brisket as the filling for his chimichanga, a massive, meat-filled fried tortilla covered in molten queso, salsa crema and guacamole. It's a heavy dish, and though I enjoyed a few bites of the decadence, it was a little bit like using Louis XIII cognac as your base liquor with Coke: The brisket is so good on its own, it needs no extra frills to shine. 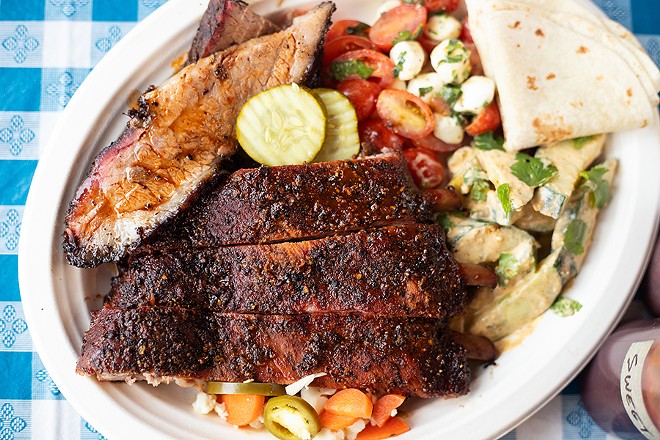 And shine it does as a simple Texas-style brisket platter. Randolph coats the beef in nothing but salt and pepper, then lets it smoke for 21 hours. The result is a fall-apart, fatty slab of meat so tender you could butter your bread with it. The portion is so hearty, the brisket looks like a small slab of prime rib, a likeness that's underscored by the fact that he ladles smoky, seasoned drippings over the top like au jus. Whether doing so is by the book makes no difference — this is a damn good hunk of meat.

If Original J's chimichanga is a study in decadence, the chicken enchiladas succeed because of their restraint. Tender chicken and ricotta cheese are folded into tortillas and baked with verdant green chile sauce. Creamy, but not so much that it overtakes the lightly smoked meat, the dish is perfection of the form.

There is nothing restrained about the Original J's burger. The mammoth, eight-ounce patty is stacked onto a brioche bun with thick slices of griddled onions that capture the flavor of White Castle hamburgers. The meat and onions are then smothered in queso; the taste is wonderful, though it's difficult to eat. Like the Tacos Norteno, this is a knife-and-fork endeavor. 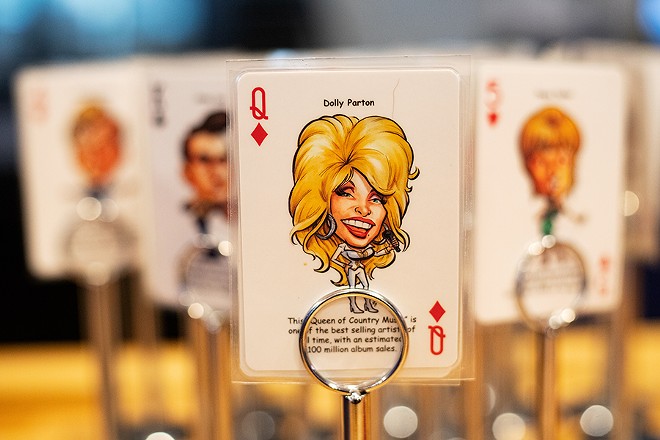 Chili Colorado is a dazzling dish of luscious pulled pork simmered with red chiles that are less spicy than they are warm, smoky and evocative of baking spices. The meat itself is revelatory: sticky on the outside, marbled with fat and fork-tender on the inside, every inch of it soaks up the chile-seasoned jus. It rivals the brisket as Original J's best dish.

Randolph's deft touch is evident on Original J's side dishes as well. Much more thoughtful than the traditional barbecue-joint sides, the restaurant distinguishes itself with accompaniments like lemony-dressed kale that is sprinkled with cotija cheese. The bright greens are like a palate cleanser — a must-try side dish for some of the restaurant's heavier offerings. Cheesy hominy is Randolph's answer to mac 'n' cheese, and the rich beans have a hint of heat and wonderful texture that is halfway between refried and baked beans. I was especially impressed with the plantains; the sticky, caramelized little nuggets have a subtle sweetness that pairs well with some of the spicier dishes.

The ribs are one of those offerings. The massive, fall-off-the-bone-style Compart Family Farms spareribs are heavily spiced with coarsely ground black pepper and chiles. The heat is intense, mitigated only by the layer of buttery fat that marbles the meat.

Thankfully, Original J's offers frozen margaritas to wash down this heat. Served out of a humble slushy machine, you wouldn't think that the frosty cocktail is made with high-end tequila and imported Italian liqueur. If you close your eyes and focus on the flavor, though, you'd think you were back at Público's bar sipping a craft cocktail. The wood paneling and country-western soundtrack may signal otherwise, but Mike Randolph's masterful fine-dining touch can't help but shine through.