(C) KEN HOWARD Siblings Oscar (Ron Raines), Regina (Susan Graham), and Ben (James Morris) are as nasty as they want to be.

Words and music by Marc Blitzstein. Based on the play and film The Little Foxes by Lillian Hellman. Directed by James Robinson. Presented through June 24 by Opera Theatre St. Louis at the Loretto-Hilton Center (130 Edgar Road, Webster Groves; 314-961-0644). Tickets $25 to $129.

Regina Hubbard Giddens, the title character of Marc Blitzstein’s 1949 opera Regina, now being mounted for the first time by Opera Theatre St. Louis, is in many ways a monster. She’s selfish. She’s cruel. She shamelessly boasts that she only loves “things” — and by that, she means things you can buy. You’d never want to live with her, but what a terrific character for an opera!

Regina first made her grand entrance in 1939 as the star of Lillian Hellman’s play The Little Foxes. Many great actresses have sunk their teeth into the part, including Tallulah Bankhead, who triumphed on Broadway, and Bette Davis, who memorably played the part in the film adaptation. Elizabeth Taylor later took her turn.

Here in St. Louis, the internationally renowned opera star Susan Graham now fills their shoes — and doesn’t just portray Regina convincingly; she also gives her a positively gorgeous mezzo-soprano. When she belts out “The Best Thing of All,” which argues that the act of wanting is the greatest pleasure, she’ll sell you on her mantra and whatever else she’s peddling too. It’s a star turn in the old-fashioned, old-movie sense of the term: Graham commands our attention every minute she’s on stage. You’ll root against her. You may even root for her. You surely won’t be able to look away.

Regina is that rare opera where business, not love, is front and center. Regina and her brothers, Ben (James Morris) and Oscar (Ron Raines), run a cotton farm in 1900 Alabama. They are wealthy enough to have a house full of servants but not, as Ben points out, Southern aristocrats. That was Oscar’s wife Birdie (Susanna Phillips), who was wed for her plantation and is now dismissed as an alcoholic.

The three are now plotting to go into business with a wealthy Chicagoan, to “bring the cotton mill to the cotton.” But to do that, they need to persuade Regina’s ailing husband, Horace (an excellent Kristopher Irmiter), to come back from Baltimore and go all in on their investment. Regina’s determination to get at Horace’s money will involve using their daughter Alexandra (Monica Dewey) as a pawn — and destroying Horace himself if need be.

For a play that’s largely about finances, Regina is surprisingly moving. In addition to Graham’s fearless portrayal, much of that is thanks to Phillips’ portrayal of Birdie, the sister-in-law who personifies the damage wrecked by these “little foxes” who spoil the vineyard. Making her Opera Theatre St. Louis debut, Phillips is devastating, slowly unveiling the heart of a woman who is all too aware of her own poor choices.

Credit goes to director James Robinson, too, for staging the play in a way that doesn’t ram home its politics — but reminds us subtly that even Birdie’s nostalgia is a form of privilege. As she sings of her family’s old plantation, Robinson places servant Addie (Melody Wilson) right next to her, the black woman’s arched eyebrow reminding us that while the “gentle” way of life now gone with the wind may have suited Birdie just fine, it also rested on its cruelties.

At its core, Regina is a play about capitalism only a communist could write, a vicious critique of a family for whom nothing is personal and everything is business. There are no real love songs here. There is, however, beautiful music that’s immediately approachable, including a gorgeous song about the rain that begins the third act — a reminder that there can be moments of beauty even in a pit of vipers, and that salvation lies in seeking out kind people and running from cruelty. It took a few attempts at retooling to get Regina right, but this production, a slightly edited version of the one first mounted by the Scottish Opera in 1991, really sings. (For such a mean play, it’s also quite bitchily funny.) 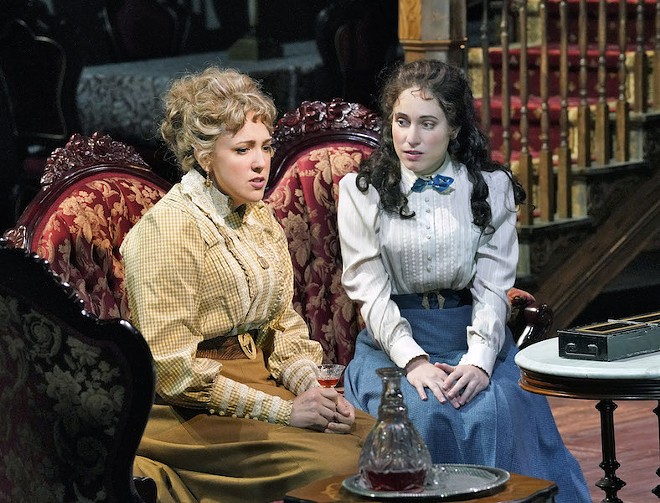 But you won’t be laughing in the end. It’s here, even as she gets (mostly) what she wants, that we begin to realize the forces that have made Regina such a tough cookie, and the human cost of those battles. When her conniving older brother Ben sings the patronizing “Greedy Girl,” suggesting Regina would be better off smiling a bit more, you may find yourself wanting to slug him. Yes, Regina victimizes anyone foolish enough to stand in her path — but, we begin to realize, what else could a woman do who wanted a seat at the table, who insisted on not being her brothers’ victim? She had to fight for everything. Is there any woman on top who can’t say the same?