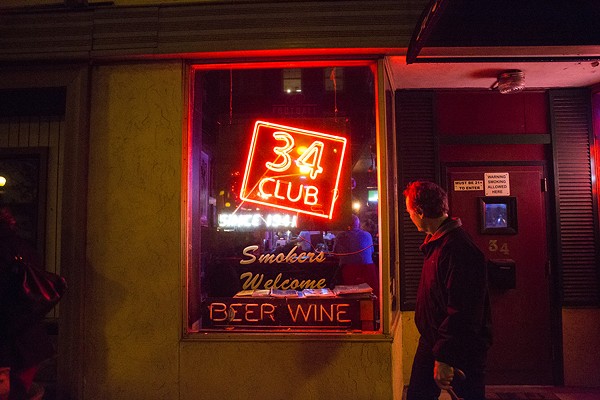 The 34 Club's newest bartender, Lynn Rinker, might be the most au courant person here with a half-shaved head and pin-up-style tattoos. "Who's playing this sleepy fucking music?" she complains about "Take Five" on the jukebox. (Spoiler alert: it's me. They don't play enough jazz in bars anymore. )

But Mullen is probably the most outspoken proponent of keeping the bar open.

"This place has been here for 75 fucking years, and they're just gonna tear it down. Who does that?" he laments. "The neighborhood is changing so dramatically now, there's really not a whole lot of mom-and-pop places left around here anymore."

The late, great Anita Andell, who died of cancer in 2014, got the RFT's nod for Best Bartender in 2011. It was an honor she wore with pride, even though many regulars questioned how such a cantankerous person could have possibly won such an award.

"She could be nice to you if you were nice to her, but if you fucked with her, she would drop a house on you," laughs Mullen. He takes another drag of his Camel. "She was one of my best friends."

John Daniels, owner of Wicke Auto Services Body Co., might be the bar's oldest living patron. Now 87, he entered the 34 Club for his first drink when he was 15. "I started coming here in 1945," he says. He's sitting at the bar on a late Tuesday afternoon, just before the daytime game shows air, a cigarette in hand and a big glass of scotch within reach. "They used to have people come in and play jazz, play piano and raise hell. Forrest Tucker came in here once, and I remember having a drink with him. A beautiful woman dancer, whatever her name, she came in here. So many people," he recalls fondly. "There was a fellow on the East Side named Buster Wortman ... he used to bring his friends and clients here and have drinks and so forth." ("Clients" may be putting it nicely; Wortman was a Depression-era bootlegger and gangster. In time, he would come to run East St. Louis' gambling syndicate.)

Daniels' displeasure with the Central West End's trajectory is evident. "I can't say I'm crazy about all the developments here. I don't want to lose the atmosphere we've had here for years and years," he says. But nothing is ever the same as it used to be, he admits. "I think it's another thing that happens when time moves on. I don't like to see it closing, but there's no choice."

Another long-time patron, Evelyn Baker, is famous in her own right. In 1983, she was named the first black female circuit judge in the history of St. Louis. "Finest circuit in the state," she smiles with a long drag on a cigarette before stamping it out in a plastic ashtray. "And the most productive," she adds.

In 2000, Baker found herself at the center of a controversial decision to keep November polls open until 10 p.m. during the Presidential election, thanks to the apparent mishandling of voter lists by the election committee. And though she served for 25 years and has only been retired for 8, she's been coming into the 34 Club for half a lifetime. "The people are real," she says approvingly. "We look after each other, we've got each other's backs. It's changed quite a bit over the years, and most of the originals are dead. But the philosophy remains the same. We're family."

She adds, "It's where I met my late husband." She pauses to slowly light another cigarette. "I've seen kids grow up. I've seen second and third generations of families come in. It's an interesting place."

Ned Bowdern is another regular and quite a storyteller in his own right. "There's a lot of ghosts in this room," he says. By chance, he reconnected with a grade-school sweetheart at the 34 Club and the two have been together ever since. They call her Betty Bandstand — reference to her days spent as a teenager, dancing on American Bandstand with Dick Clark.

He recounts an age-old story that never loses its charm. "Jimmy Nieders was a mountie and used to come here and park his horse behind the bar and have a drink while on duty," he explains. "So, one week he went on vacation and one his fellow cops took his horse out to give it some exercise. The horse was like on autopilot or something — first thing he does, he takes the cop right to the bar. Nieders gets back from vacation, walks in and says, 'I got screwed by my horse!'"

Everyone sitting at the bar has heard the punch line before, but they still erupt in laughter. "Jimmy Nieders, hell of a guy," Bowdern says.

There's a framed picture of a priest above the door leading out to the street. "That's my uncle," says Bowdern. The priest's name is William Bowdern. He assisted in a supernatural event that would later become a blockbuster movie. "Ever see The Exorcist?" Bowdern asks, pointing up at the photo. "That's the guy."

Brennan had asked Bowdern if they could hang the photo in the bar, annointing the famous priest the patron saint of the 34 Club.