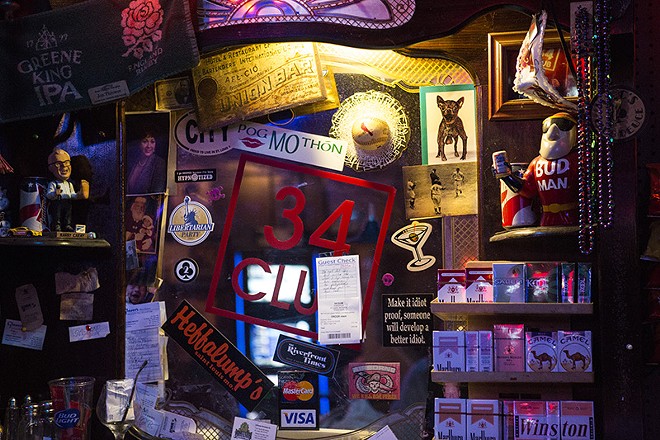 The 34 Club is a veritable crawlspace. An attic within an attic. A forgotten speakeasy where the password no longer carries any meaning. The smell of dust and cockroach dander pervade throughout, and crossing the threshold is a commitment to stepping backward in time — you can feel the clock hands slow to a crawl.

The bartenders sling manhattans overflowing with whiskey and a dash of water. The bathroom is a squatter's prison: The only complement is a lock; the only luxury is that it works. It's a wind-down for most, a wind-up for some, but it's been a hiding place for anyone in the city looking to not be found.

It's not pristine or pretentious. It's dark, drab and perpetually filled with the smog of a thousand cigarettes, having escaped the smoking ban thanks to its diminutive square footage and lack of food. And if you walk in thinking there's a big pint with your name on it, think again. There are no taps, no collection of craft beers. Bottled Stag and Miller High Life reign supreme — and they're not drinking them ironically here. Cocktails are cheap and built to last.

When the bartenders finish with their shift, they pour themselves a stiff one and take a seat on the civilian side, never even stepping outside for a break. Talk about loving where you work.

Steve Smith used to be a regular here, long before he opened the Royale. "I always dug the suits rubbing elbows with the regular working man at this bar, which is not common enough," he writes in an email. "The older regulars in the neighborhood really make it worth the trip. They would cuss, joke and drink with the best of them."

Trinkets and minutiae collected over the years adorn the walls: pictures of The Odd Couple, the Rat Pack, old photographs. To inquire about their significance is a lost cause. Bar manager Mike Mullen shrugs unknowingly. "Most of it is just crap and cobwebs. That's what holds it together," he laughs.