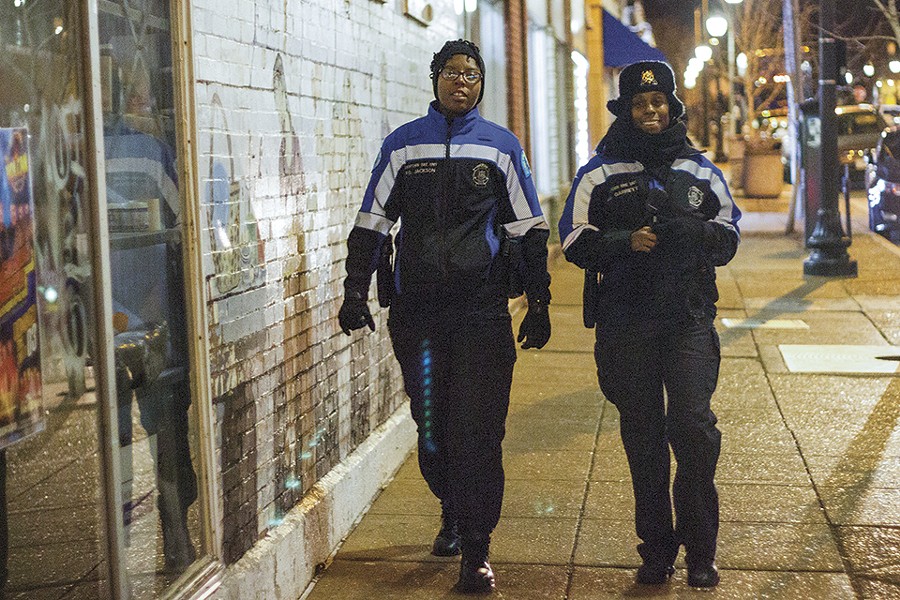 DANNY WICENTOWSKI On duty on a cold night, officers Devin Guajardo (left) and Jazmon Garrett serve as the SLMPD's anchors on Cherokee Street.

It is a cold Friday morning in December, and the business district is basically deserted, its stasis disrupted only by the passing traffic and a bitter, whistling wind. Crunching their fingers inside thin gloves, two St. Louis Metropolitan Police Department officers walk west along the sidewalk.

The embroidery on the front of their uniform jackets says, incorrectly, "Downtown Bike Unit." Although Devin Guajardo and Jazmon Garrett also work assault investigations and pull overtime patrols all over the city, the two officers actually serve in a unit all their own. They belong to Cherokee Street.

Day to day, nine to five — or two to ten at night — they traverse a three-quarter-mile stretch populated with bars, restaurants, music venues, Mexican groceries, furniture stores, resale shops and antique emporiums. The pair represent a throwback to days of yore, back when the department had manpower to spare. They are "community policing" in action.

This stretch of Cherokee bustles with a potent mixture of family businesses, entrepreneurial energy and youth culture. At the same time, the area has seen more than its share of violent crime, so much so that, starting in 2015, the department plunged resources into Gravois Park and the surrounding area, with the intent to topple the crime rates that were leading the district.

Eventually, those resources would include two newbie officers, neither more than two years out of the academy, but who both showed a knack for a certain set of policing skills.

The taller of the two, Guajardo, has her eyes hidden behind slender black aviators. She clangs through the metal door to the Cherokee Market, in the midst of describing the duo's work on the assault team — "We're like part-time detectives," she says — when she's greeted by the man behind the register.

"We've been busy," says Garrett. She slides off her earmuffs. "They've got us doing so much."

Today, though, Guajardo and Garrett are back on the beat. They will return here several times over the next eight hours, not just to warm up, but to trade crucial gossip — about past crimes, new faces and potential signs of trouble. In the afternoon, Guajardo will post up near a rack of cheap snacks and stoically evaluate the crop of teenagers who start to flood the area when school lets out. One teen will take one look at the glowering cop and turn tail, bounding at a full sprint out of the shop.

The radio on Guajardo's shoulder squawks. It's an incident on Ohio Avenue, just a few blocks away. "Male and female fighting ... male is making threats toward the female ... caller is also irate that police have not arrived yet."

Someone else is on their way to check out the altercation. On this morning, the officers have nowhere to be but where they are. Beyond this street, the regular patrol officers in District 3 bounce from crime to crime, taking incident reports and passing cases to detectives before driving by SUV to the next mugging, car theft, assault or domestic disturbance. The Cherokee beat officers stay put.

The dispatcher on Guajardo's radio interrupts with another loud alert — "Three 911 calls to the same address ... suspect known to carry a gun" — just as the two officers are saying goodbye to the shop owner and walking back into a blast of wind.

Guajardo and Garrett have a different job to do. 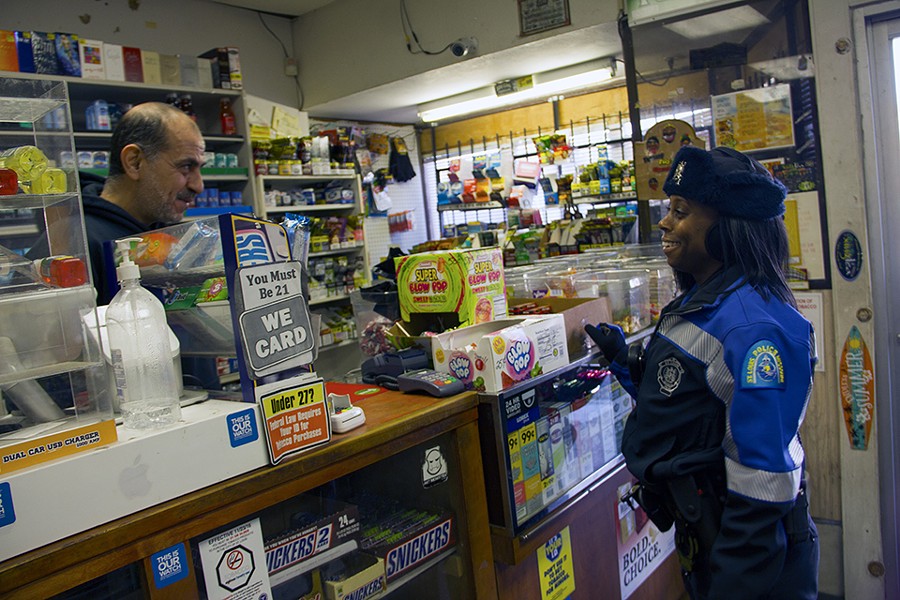 When Shawn Dace took over as captain of District 3 in 2015, he took special note of the communities surrounding Cherokee Street. His reasons were not the ones that have made the district a destination for food lovers and other young creatives. Cherokee itself may be one of the city's biggest success stories, but get one block off the street and things sometimes feel downright dangerous.

"I have thirteen neighborhoods, and when I started, they told me that two neighborhoods, Gravois Park and Dutchtown, drive crime in District 3," he says. "So we focused a lot of attention there."

Judging by the available crime stats, the attention has paid off. Compared to 2016, total crime in Gravois Park was down thirteen percent in 2017, while the informal collection of "Cherokee neighborhoods" (Gravois Park, Marine Villa, Benton Park and Benton Park West) has seen an overall drop of around eight percent. During the same period, homicides citywide surged past 200 — largely thanks to a concentration of murders in a handful of northern neighborhoods — and so the trend in south city is a notable bright spot.

That boost of attention, though, has a real cost. Dace's back office in Central Patrol headquarters on Jefferson Avenue sits opposite a bulletin board listing patrol officers and their respective car numbers. At full strength, District 3 should field 104 officers across south city. Dace only has 92, and five of them, he says, are on extended sick leave. Four are detached to other units. Practically, that leaves the district 21 officers short.

Packing neighborhoods with patrol cars takes bodies, which the SLMPD simply doesn't have.

Presently, the department's 1,184 commissioned officers — more than 100 short of its optimal strength — are spread between patrol duties and support staff. In his own district, Dace estimates, only seven to ten officers on average are patrolling during any given shift. In more affluent corners of the city, community improvement districts and business associations have turned to private security companies, staffed by off-duty St. Louis cops, to increase patrols. Aside from Soulard and parts of South Grand, District 3's neighborhoods are largely without that luxury.

The staffing shortages are nothing new. Still, Dace remembers that it wasn't long after he took command of the district in 2015 that business owners on Cherokee Street began lobbying for foot patrol officers. They complained that the departure of regular patrols from the street had created a safe zone for crimes both petty and serious.

"The more I attended meetings, that would be the thing, every time," he says. "And I got to realize that a lot of the issues we were having down there were from some of the juveniles. My thought process was, although I am forfeiting two officers, the possibility that these officers could get to know who the juveniles were, the ones who were possibly creating issues, would outweigh us losing a two-man car. I started to think about who would be good for that area."

In the summer of 2016, Dace found himself passing through a crowd on Cherokee during the year's National Night Out celebration, a block party that brought residents into the street to eat, drink and let loose. The air thumped with music. He spotted two blue uniforms: Jazmon Garrett and Devin Guajardo.

"I saw them out dancing with some young kids. I thought, 'They got a good rapport with the community,'" he recalls. He'd found his beat cops for Cherokee.