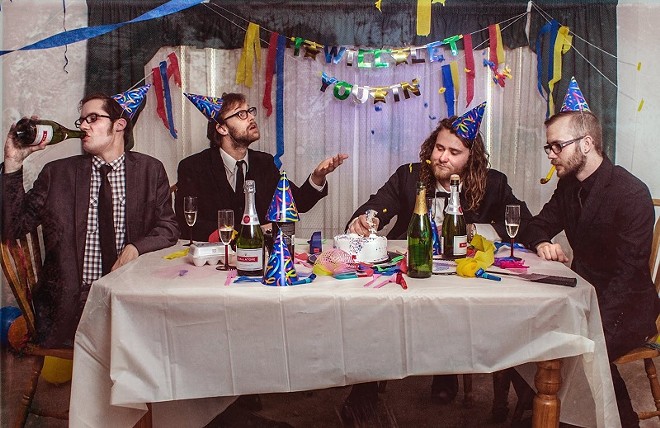 Old Souls Revival is throwing a party, and you're invited. The rock quartet's sophomore LP, I Will Let You In, is even crafted in the image of an invitation to a kid's birthday celebration — all primary colors, bubble lettering and Lisa Frank-style imagery.

The album's winsome exterior belies some of the heaviness, both in performance and lyrics, which attends many of these songs. It's not a concept album, exactly, but singer, guitarist and lyricist Neil C. Luke spends much of the record examining relationships — with ex-lovers, with bandmates and with the music scene at large — and alternating between the scrappy outsider and the cautious introvert.

But on a snowy Tuesday in early February, Luke is every bit the gregarious extrovert as he holds court at the Blue Pearl, an intimate new bar and venue on the western edge of Cherokee Street's entertainment district. He's tall, lean and voluble, comfortable quoting both Voltaire and Father John Misty in the course of conversation.

Luke hosts a weekly session at the Blue Pearl with the Wilderness' Bobby Stevens — less an open mic night and more of a songwriter's circle. Before the music starts, Luke talks about the inspiration for the new album, and how the title of I Will Let You In sets the tone. The title track comes first on the album, and the song operates as both a come-hither and a protective defense.

"I like the idea that, on a base level, it seems really inviting," says Luke, "but you have to do your homework and finish the lyric to get the sentiment." On the track, he finishes the couplet with a caveat: "I will let you in / But that's all I'm offering."

"I like things to be vague," he continues. "I want to keep it broad but personal." That conceit guides many of these songs, many of which take the form of an exhortative dialectic. As a vocalist, he performs with a little guile but a fair amount of blunt force; his words hit square on, somewhere in the Midwestern truthteller's tradition of the Hold Steady's Craig Finn and the Bottle Rockets' Brian Henneman.

Luke shapes the characters in his music as "me" and "you," keeping the storyline shifting from song to song. Though when asked about an overarching thread that might tie the tracks together, Luke cops to a narrative that, in large part, centers on a small-stakes touring band — and the most striking songs on I Will Let You In center on navigating the local music community.

"Broadway Connection" gets at this most directly, as the track's narrator makes his way through the haze of a local gig and butts up against the various lines of demarcation within the scene. The song's quick-hit guitar licks and tightly wound drums give it nervy pep, but for Luke, a native of Pinckneyville, Illinois, it was born of a gigging band's frustration at gaining a foothold in town.

"I remember trying to land gigs at Off Broadway for so long," says Luke, "and guess what it was? Cree Rider asked us to do it — it was somebody else who knew who they needed to know.

"It only sucks when you're not a part of it, I feel like," he adds with a laugh. "That's really me being childish — I get that."

Those roadblocks, either real or imagined, pop up both in song and in conversation with Luke. On "Broadway Connection," the narrator walks away from the local show realizing "how the game got played." Whether he comes away wiser or more disillusioned is open to interpretation, but Luke himself saw promotion and gigging as a challenge inherent in the system: "Quit being a crybaby and start figuring out how to do it," he says in a moment of self-admonishment.

Later in the album, "Move" seems to point a finger back at artists satisfied with stagnation, outlining the risks and rewards of taking an artistic gamble. For Old Souls Revival, part of that gamble has meant a continual revision of their approach to Luke's songs.

While the band's first release leaned more on acoustic folk tropes, Old Souls Revival has become increasingly comfortable working with louder volumes and harder-hitting dynamics. For drummer Jeremy Reidy, that progression came from the group's evolution from dive-bar cover band to an original outfit. The recording process — executed mostly as a full band at Sawhorse Studio — aided the album's up-front sonics. "For the second record, we wanted the rowdiness to be part of the sound," says Reidy. "We were trying to cut as much live as we could."

That approach — with close-mic'd drums that pop and forceful, sometimes growling vocals — puts Old Souls Revival somewhere on the lighter side of the hard-rock genre, a style that the band members admittedly have little interest in.

"One of the things we've struggled with is being a genre-less band. Most rock bands I hear have zero interesting or redeeming qualities. I would expect someone to have that reaction to us — I'm not high on my horse here," Luke says, laughing.

But if Luke feels like an outsider or a band without a country, it's hard to see it during his weekly gig at the Blue Pearl, or at his other regular appearances at bars in the Central West End and Soulard. If, as Luke says in our conversation, St. Louis is made up of cliques, maybe the smartest thing to do is create your own.