Nudo House Is Every Bit as Good as the Hype

If Kate Upton was a bowl of ramen, she'd be Nudo House's "Shroomed Out": a voluptuous beauty, a little bit thicker than the norm and definitely worthy of a magazine cover. Perhaps Food and Wine would be the appropriate choice, though this shockingly rich soup is so sexy, it wouldn't be out of a place in a nudie mag.

Unlike the delicate mushroom or veggie broths that announce their presence with a whisper, the base of the "Shroomed Out" is a deep, throaty bellow. The mouthfeel is luxuriously rich, a texture typically reserved for cream-based soups, and the deep umami taste mimics the satisfaction of beef stew — not in the sense of trying to be a meat substitute, but rather that it stands as a meatless equal.

And the broth, however glorious, is only part of the story. Thick slices of king oyster mushrooms are silken, fleshy and gilded with garlic oil that forms shimmery droplets on the broth's surface. Fermented bamboo shoots give a punch of funk, and a halved, soft-boiled egg with a yolk that refuses to commit to just one state of matter bobs in the luxurious liquid. Add to this braised bok choy and perfectly springy ramen noodles and you've got no mere soup. You have, instead, a thing of beauty.

How co-owners Qui Tran and Marie-Anne Velasco can coax such richness from plant-based ingredients blows my mind. Ostensibly, the soy milk gives the broth its viscosity, but if you or I were to combine this special ingredient with the same components, it would be nothing like what these masters have created. This is because they are no mere soup-makers. For years, the pair has painstakingly researched, studied, traveled and toiled to perfect their art with the sort of obsessive fastidiousness that propelled da Vinci to create Mona Lisa's smile.

Their journey began about eleven years ago when Tran and Velasco met at the original Delmar Boulevard location of Tran's Vietnamese mainstay, Mai Lee. Velasco had moved to St. Louis from Montreal to take the sushi chef gig at the Ritz-Carlton in Clayton. Velasco worked at the Ritz and then the Chase Park Plaza, eventually teaching culinary classes and becoming a regular at Mai Lee. There, not only did she find the best pho she'd had outside of Montreal, she also found a friend and culinary soulmate in Tran, who had grown up working at his family's storied restaurant. The two became fast friends and kept in touch even after Velasco left town to start a new life with her husband in Chicago.

About six months after arriving in Chicago, Tran called with a proposition. The two had often talked about opening a restaurant of their own one day and shared an obsession with ramen. It didn't take much coaxing to sell Velasco on his idea. Soon Tran and Velasco were traveling the country – Chicago, New York, Los Angeles — on a quest to develop the perfect bowl of ramen.

While in Los Angeles, Tran and Velasco connected with Shigetoshi "Jack" Nakamura, the acclaimed chef known as one of Japan's "Four Ramen Gods," and he graciously offered to serve as their mentor. Not only did Nakamura teach Tran and Velasco everything he knew, he made a prescient observation: He had no doubt they were going to make it.

Clearly, Nakamura knows talent as well as he knows ramen. Nudo House has been packed since the day it opened — even before that, in fact, as its R&D pop-ups were regularly one of the town's hottest tickets. To say that people have been waiting with bated breath for a taste of their ramen is no exaggeration; for five years, the city has been abuzz with talk of Tran and Velasco's project, which explains why, regardless of the day of the week or the time of day, you'll find the strip mall storefront packed.

The restaurant's comfortable dining room has the space to accommodate all the would-be slurpers. A mix of individual and communal tables dot the warmly lit space, which is decorated with photos from the owners' ramen research as well as Voltron posters. The open kitchen takes up the entire length of one side of the room; in it, pots of simmering broth send up their steam like a siren song to hungry patrons.

Thankfully, Nudo House is a well-oiled machine, so you don't have to wait too long to dig in. Behind the restaurant's fast-casual model is a decidedly slow-food ethos, with broths and meats simmering and marinating for days to maximize flavor. The restaurant's signature "Classic Nudo" shows how much beauty can come from taking so much time and care with food. Tender slices of pork belly marinate for two days and are then braised before they are allowed to grace the masterful pork tonkatsu broth. Cooked for twenty hours, the broth is so savory, it's as if the entire essence of pork is distilled into one spoonful. A single sheet of nori, a half of that custard-like egg, some green onions and sesame seeds and a heap of curly noodles complete the package that makes you realize why people became obsessed with ramen in the first place.

Nudo House's "Hebrew Hammer" is chicken noodle soup cranked to eleven. The broth coats the mouth with a rich blanket of chicken-fat-laden liquid and enough fermented black garlic to render Buffy unnecessary. It lingers — not that you'd want such perfection to leave — and serves as a golden canvas for hunks of chicken meat, noodles, bok choy, bamboo and a soft-boiled egg. As with the mushroom broth, or any of the broths for that matter, the amount of body that the chefs manage to contain in this liquid form is astounding. It's not like eating soup; it's like eating meat in soup form. 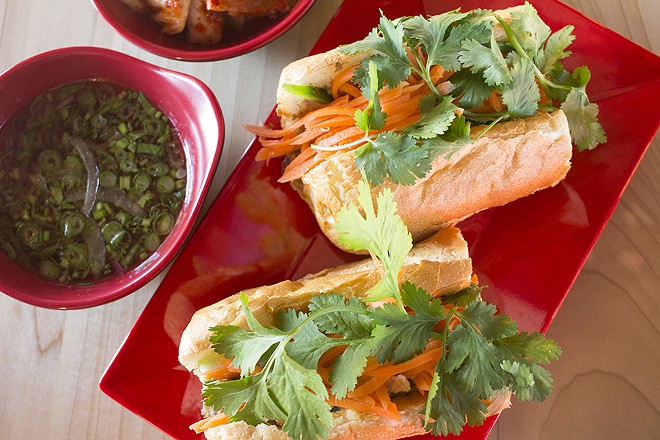 There are other noteworthy items at Nudo House, not the least of which is a fun Vietnamese riff on the French dip. Called the "Bánh Mì Pho Dip," the dish pairs a beef-laden version of the classic baguette with a side of Tran's famous pho broth. Crisp vegetables and herbs brighten the sandwich.

The pho broth is also the base of Nudo House's pho soups. Particularly noteworthy is the "Pho Shizzle," which combines pork, shrimp, beef and glass noodles with the sweet and aromatic beef liquid. Fans of Mai Lee's sweeter-style pho might notice a slight difference from Mama Tran's signature broth (Nudo's does not use tripe, and there was a little top-secret tinkering) but will be pleased nonetheless to see this beloved soup remains true to its roots.

Appetizers include traditional spring rolls and a crab Rangoon so over-filled with cream cheese and imitation crab it should not share a name with the pasty versions that Chinese takeout restaurants heat up from the freezer. 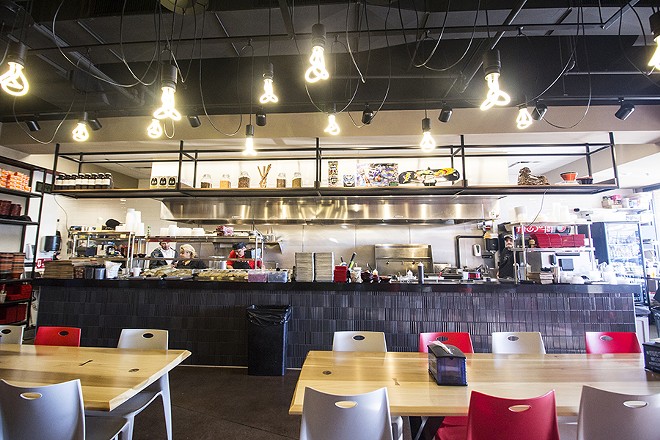 The "Nudo Salad" is a must-try starter, not only because the lotus root, shrimp and pork combination is beautifully executed, but because the crisp vegetables and pungent, rice-wine-based dressing are a welcome palate refresher to counter the restaurant's warm, rich broths.

For dessert, Nudo House makes its own soft-serve ice cream, with playfulness matched by its substance. The selection changes regularly, and on my visit the choices were black sesame and coconut. There was no need to decide, though. The person working the counter offered to hand-swirl them, resulting in a combination that balanced the black sesame's almost peanut-buttery sweet saltiness with the nutty coconut.

That dessert, like everything else that comes out of Tran and Velasco's kitchen, is the perfection of its form. You wouldn't expect anything less, though, from two people who have gone to such lengths to bring world-class noodles to St. Louis. These demigods of ramen have indeed created their Aphrodite in Nudo House — and she's a perfect ten.