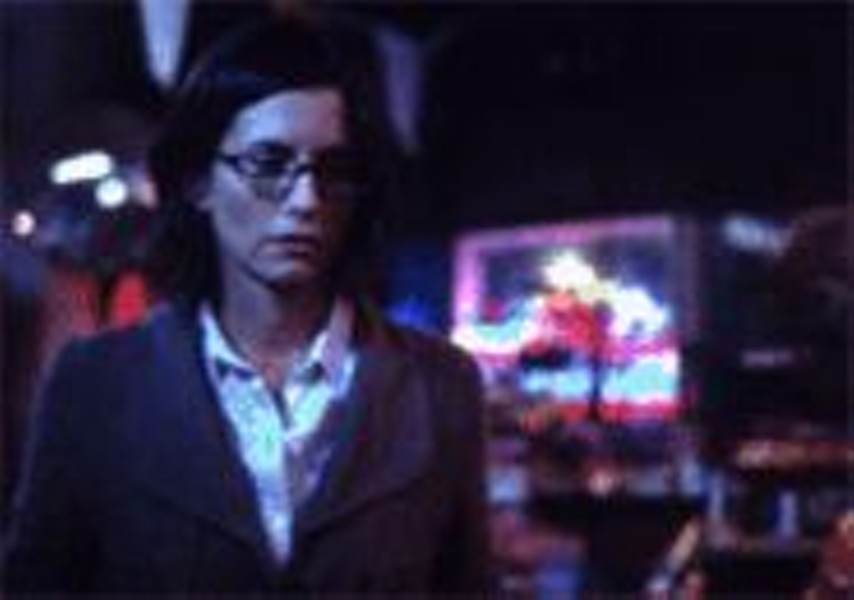 Sure you want to be inside Sophie Jacobs' head? The poor woman's cabeza is so stuffed with guilt and fear, so tormented by grief and what might be delusions, that to spend even five minutes in there poses an obvious risk to your own sanity. At least, that's the way filmmaker Greg Harrison (Groove) hopes we feel -- as crazy and mixed-up as Sophie herself. Almost the entire narrative of Harrison's new thriller, November, unfolds in his heroine's mind -- three distinct, contradictory narratives, actually -- and by the time you get through the thing, you could be suffering from a case of perceptual overload. Puzzle nuts, dedicated surrealists and admirers of Alain Resnais' Last Year at Marienbad (one of Harrison's acknowledged inspirations) will probably have a good time sorting through this 78-minute bag of tricks. Others may find it gimmicky to a fault.

Even on its surface, November can be as baffling as it is intermittently intriguing. What we know for sure is that on the night of November 7, Sophie (Friends alum Courteney Cox, bespectacled, deglamorized and deadly serious) and her lawyer boyfriend, Hugh (James Le Gros), are driving home from dinner at a Chinese restaurant when she feels a sudden urge for chocolate. He stops at a corner store in a chancey neighborhood, goes inside and is promptly shot dead, along with the store's proprietor, by a crazed stickup man. The rest of the story, written by newcomer Benjamin Brand, keeps changing and shifting as the shocked Sophie wrestles with her sorrow and reimagines the murders on ever-more-complicated levels of consciousness. If you relish ambiguity, this might be the mystery for you.

Significantly, Sophie is a photographer who teaches at a local college, and the movie (inventively shot on mini-DV) has all kinds of things to say -- some of it worth heeding -- about the magic of images, the choices artists make and the hidden meanings in pictures. Harrison says he was thinking of Nicolas Roeg's cult thriller Don't Look Now and Steven Soderbergh's The Limey when he put the mind games in November, but he may owe a bigger debt to Blowup, the haunting Michelangelo Antonioni film in which a nihilistic London fashion photographer gets a moral wakeup call when he discovers evidence of a murder in his snapshot of a leafy green park.

For Sophie, Hugh's death is not just a trauma, it's the start of a psychological revolution that threatens her in every way. In her photo class, a slide depicting the store where the murders occurred materializes in the magazine of her projector. Standing before her mirror, she morphs into someone else. Surveillance tapes suggest alternatives to Sophie's first impressions. Her outpourings to a psychiatrist (Nora Dunn) are muddled. As her memory starts playing tricks on her (or does it?), we see multiple versions of the corner-store murders. What's real? What's imagined? Is our troubled protagonist in complete denial?

Like everything from Rashomon to the twisty, immensely popular thrillers of M. Night Shyamalan, November means to drop plenty of hints about what really happened while leaving the mystery intact. Whether you think that kind of deconstructionist ploy works here probably depends on your tolerance for portents, mystification and tricked-up flashbacks, but the eerie mood is intensified by Nancy Schreiber's dark, jittery cinematography, an offbeat score by Lew Baldwin, and the presence of three odd minor characters -- Sophie's overbearing mother (Anne Archer), the co-worker with whom she's had a guilt-ridden affair (Michael Ealy) and a bullet-headed police detective in a lumpy suit (Nick Offerman), who grows curiouser and curiouser as Sophie's distress takes increasingly bizarre turns. Did she take pictures on the night of the killings? If so, the cop laments, they are "too arty for their own good."

The same might be said of November itself. It's an interesting and sometimes compelling experiment -- especially when you consider that the makers got it onto the screen for a mere $150,000 -- but it's so derivative, and it indulges in such film-school solemnity that many viewers will probably be more annoyed than engrossed by all the gamesmanship. Harrison's first film, Groove, which glimpsed the San Francisco rave scene, got mixed reactions from critics and audiences, and the jury is evidently still out on this young director. As for Cox, who will probably take a while to shake off her Friends trappings, November was obviously a labor of love and an attempt to alter her image, and she certainly shows some acting abilities we weren't aware of on the boob tube.