Nick Bognar's grandmother passed away about three months before he opened Indo. Born in Thailand and trained in the domestic arts as a noblewoman in the royal palace, she lived long enough to see her daughter, Ann Bognar, rise from a server assistant at a south St. Louis County hotel to a beloved restaurateur. She also got to watch her grandson transform from being his mom's kitchen helper at her restaurant, Nippon Tei, to a James Beard Award semifinalist.

Though she never saw Bognar's vision for Indo realized, his grandmother's presence is felt throughout the restaurant. There are the photos that hang on the hallway wall that leads from the front entryway and chef's table to the back dining room — black and white portraits, her hair pulled back into a bun and beaming. There is the Thai inflection that runs through the whole menu, a nod to the familial homeland.

Then there's the laarb.

Bognar admits that, though at its heart the laarb is his grandmother's, he's tweaked the recipe a bit. In place of beef, he uses lamb, which gives the dish a fuller flavor without any gaminess. Candied pine nuts and mint perfume the meat, additions that impart a subtle coolness that mitigate the searing hot chiles that are flecked throughout the chopped lamb. Fried shallots and sweet chips of candied garlic add crunch and earth, tying the dish together in perfect balance. Luxuriously rich and palate tingling at the same time, it's a glorious way to both honor and build on the matriarch's legacy.

With such a profound culinary heritage, Bognar was destined for great things in the restaurant industry. It may have started with his grandmother, but she wasn't the only one in the family to influence his path. Bognar's uncle was the first in the family to open a restaurant, a Thai establishment in Cape Girardeau, followed by one in west county.

However, it was his mother, Ann, who would seal Bognar's fate. After rising from restaurant assistant to food and beverage director at the Butler Hill Holiday Inn, Ms. Bognar decided to strike out on her own, opening Nippon Tei in Ballwin when Bognar was ten years old. The son of a restaurant owner, he was either with his grandmother, learning to taste and cook in her kitchen, or helping his mom out around Nippon Tei by rolling crab Rangoon and egg rolls.

When he was a junior in high school, Bognar took his first culinary classes through a local tech school and, following graduation, enrolled in the culinary arts program at St. Louis Community College-Forest Park. Around that time, he also became interested in sushi, working both at Nippon Tei and Wasabi Sushi Bar.

Though he embraced his family's influence, Bognar also felt the need to strike out on his own. He left St. Louis for Austin, Texas, and landed at the acclaimed Japanese restaurant Uchiko, an experience that set the tone for who he would become in the business. He soaked up every bit of knowledge he could at Uchiko and not only grew as a sushi chef, but also as a restaurant professional. He parlayed this experience into jobs at Kaze and E+O Kitchen in Cincinnati, where he was given his first opportunity to design a sushi program.

Despite his success in Cincinnati, Bognar decided to come home to help his mom breathe new life into Nippon Tei. Their changes transformed the restaurant from from a solid Japanese mainstay into the best place in the area, if not the region, for sushi, and earned him a James Beard Award nomination for Rising Star Chef of the Year. Still, just as when he was a young cook trying to find a distinct identity, he felt the call to forge his own path. 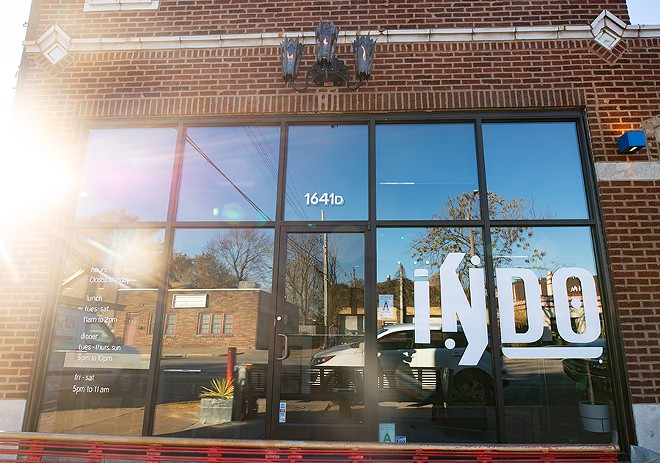 That path, Indo, opened in June, occupying the Botanical Heights storefront that previously housed Good Fortune. There's no question that Nippon Tei's menu is personal for Bognar — it is, after all, the family restaurant that set him on his course in the business and thrust him into the limelight. Indo, however, feels autobiographical in that it combines his stunning command of sushi with the Thai cuisine that is his heritage. 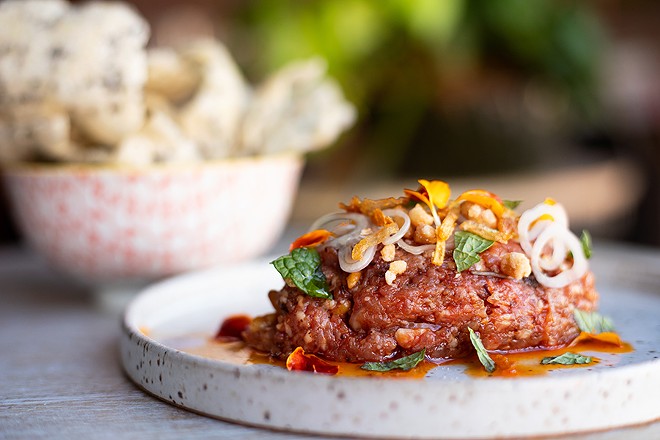 Divided between Hot and Cool Tastings, larger shareable plates and an impressive nigiri menu, Indo's offerings respect tradition without being married to it. Instead, he uses classic techniques and recipes as a jumping-off point for exploration, whether with candied pine nuts in lamb laarb or a rice flour and water "lace" that lays atop two flawlessly cooked gyoza. Stuffed with pork and chicken, the dumpling wrappers are so delicate they're almost translucent. The combination of textures — soft dumplings and lace so crunchy it's like a flattened Rice Krispie treat — is magical. 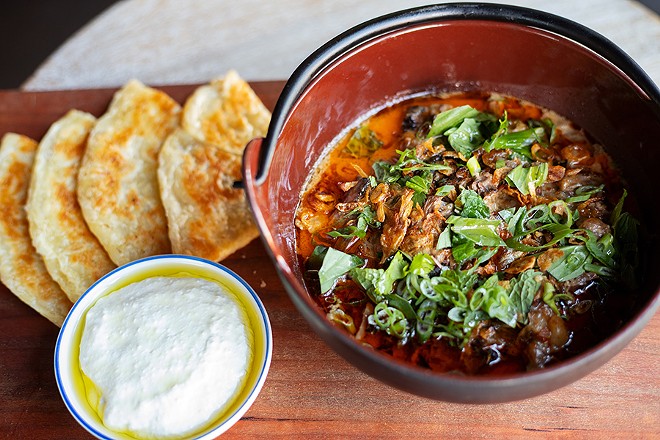 Indo's lamb ribs are the sort of dish that make you lose track of space and time. Glazed in palm sugar, the sweetness hits your tongue first, but it's quickly set aside by the salty crunch of peanuts and a refreshing herb salad. Still, that glaze lingers and, mingled with lamb fat and a bit of char, is so intoxicating you'll be licking your fingers even in polite company. 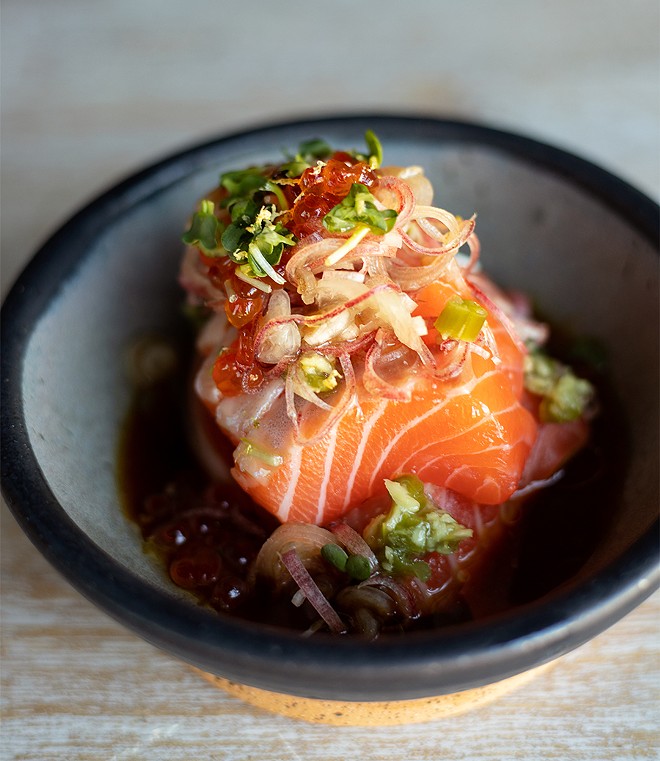 As glorious as the lamb ribs are, the Issan Hamachi may be my favorite dish at Indo. Although Hamachi has become ubiquitous on even non-Japanese menus, Bognar eschews the typical crudo preparation in favor of a thoughtful, Thai-inflected presentation. The fish is sliced into rectangles, then dressed in coconut nam pla (Thai fish sauce), chile oil, candied garlic and Thai kosho, a bright, citrusy condiment that enlivens the fish. Fresh, funky and vibrant, it's understandable why this is quickly becoming Indo's signature dish.

Crab donabe rice, a larger format offering, sounds simple: crab and rice in a clay pot. It's utterly transcendent. Tender, freshly cooked rice is dressed with Dungeness crab, and buttery crab fat infuses the rice, giving it a rich shellfish exclamation point. Pea-sized salmon roe sits atop the dish like shiny jewels; mixed into the rice, they pop with each bite, releasing a bright, sea-like flavor that enlivens the concoction. 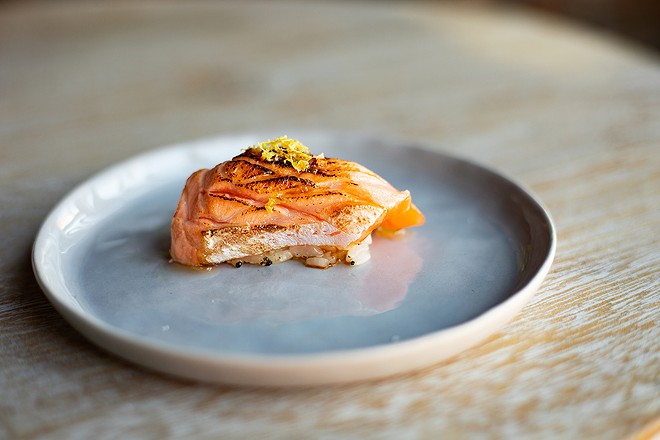 The rice can be ordered a la carte, but it is also likely to make an appearance on Bognar's omakase (pronounced ow-muh-kaa-sei) tasting menu, the ultimate Indo experience that proves why this young chef will likely go on to be considered one of the top chefs in the country. This monumental dining extravaganza — twenty-plus courses — is the sort of thing you'd watch as a Netflix food documentary, sitting on your couch gob-smacked and thinking that you will never be able to experience this in real life.

Yet here it is, in Botanical Heights. And while it does set you back a pretty penny (well over $250 with drink pairings, tax and gratuity), Indo's omakase delivers an extraordinary dining event that will undoubtedly rank as one of the best meals of your life. Set up as a chef's table with room for just six diners, Bognar serves as chef and grand marshal for a parade of nigiri, sashimi, Thai-influenced soups and A5 Wagyu — to name just the tip of the iceberg — that is as intoxicating as falling in love.

Each nibble gives you the feeling that you are tasting something for the very first time — and chances are, that is indeed the case. Bognar has the most exquisite of delicacies flown in from Japan that we are not usually so blessed to experience here in the Midwest. Though the menu changes based on what's available, he typically begins the dinner with a cup of fish broth, an offering that evokes the ritual of a tea ceremony, followed by a savory egg custard infused with a broth made from prawns and crab shell, then slicked with toasted sesame oil.

Nigiri makes up a significant portion of the omakase dinner. The evening I attended, Bognar used that part of the meal to show the dramatic differences between different types of snapper as well as fish like the delightfully clean and bright — yet unfortunately named — Japanese grunt. This dry-aged flounder is electrified with Thai chiles and a Japanese sardine so teeming with luxurious oil you had to eat it the moment it was served lest it would soak too much into the rice and make a mess. Then there are the Hokkaido scallops, which Bognar describes — and which, based on this meal, I concur — are the best scallops in the world. Their pearlescent flesh is the texture of tempered butter, a decadence Bognar offsets with shishito peppers.

Sea urchin the texture of custard, foie gras nigiri dressed with candied quinoa — Bognar does not hold back in giving his guests every luxury he can get his hands on. However, as prime of an experience as the omakase is, he presents it with ease and humility, sprinkling his commentaries with a chorus of "kick-ass" descriptors and the occasional dad joke. He also shows this playfulness in his cooking. The cherry ocean trout, dry-aged for seven days so that it concentrates the flavor and served with crackling skin and beurre blanc, is a riff on a salmon dish from the Cheesecake Factory he can't help but love. 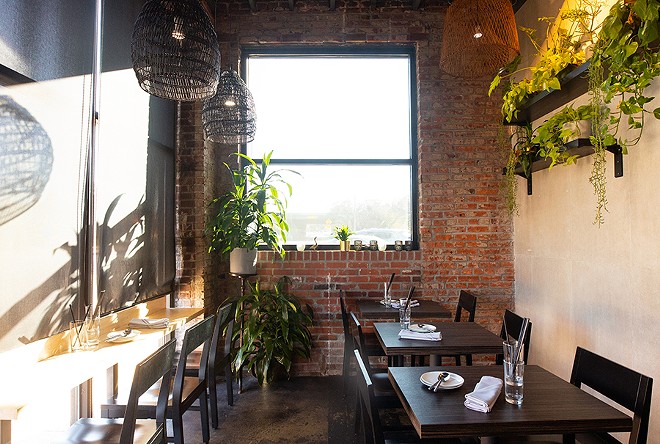 That Bognar can crack jokes about the Cheesecake Factory and Red Robin while serving a $300 meal flies in the face of everything we have been conditioned to think about fine-dining — and it's utterly refreshing. I'd go so far as to say that Indo as a whole, even including the omakase, is not a fine-dining restaurant at all, while being one of the most luxurious meals I've ever experienced. It's a revolution that has changed our city's dining scene, fomented by a chef who we will be hearing from for years to come. Grandma would've been proud.