New Line's Yeast Nation Will Make You Care About the Lives, and Loves, of Fungus

Yeast Nation is a musical that captures an important moment in time. On the ocean's floor, a community of parthenogenetic yeast cells suddenly realize that as their population has grown, their food supply has decreased, and they have to travel farther and farther to find life-giving salt. Or rather, they would travel farther, if their king hadn't forbidden leaving their homes. As in any society with limited resources strained by too much competition, something must break.

Yeah, it's out there. In addition to establishing a monarchy, the yeasts sing, dance, perform a state execution, suffer from a pair of palace plotters and spontaneously develop the concept of romantic love. Even stranger is that by the second song, you forget about the yeasts being single-cell fungus and become engrossed in the lives and travails of the few desperate characters who realize the world as they know it may be changing more quickly than they can adapt to it. Who knew that eukaryotic life more than three million years ago could feel like such a high-stakes affair?

Yeast Nation is written and composed by Mark Hollmann and Greg Kotis (with orchestrations by John Gerdes). They are the duo behind Urinetown, the other musical inspired by Robert Malthus' theories about food and population control being the key to long-term survival. Much like Urinetown, Yeast Nation leans heavily on its characters being aware they're in a musical, breaking the fourth wall and knowing what the end of the show will be ahead of time. It has the benefit of better and more memorable songs, and a less nihilistic ending.

New Line Theatre's current production of the show is directed by the accomplished team of Scott Miller and Mike Dowdy-Windsor, and it moves from strength to strength. The cast is sharp, Rob Lippert's set and lighting design are both attractive and effective (sitting in the Marcelle is like being inside a human-scale, high-dollar aquarium), and most importantly, I cared about some of these genderless, biologically identical yeasts and their plight. Personal investment is the ultimate goal of every show, but it's a big ask when you're talking about yeasts who all share one name, "Jan" (which is pronounced like "yahn"). 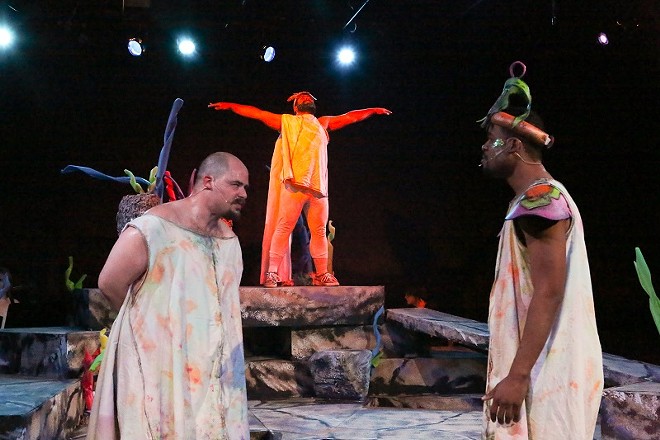 Zachary Allen Farmer is King Jan-the-Elder, and he's dying. He's issued numerous edicts against producing more new yeasts and exploring beyond the community, and his two oldest offspring, Jan-the-Second-Oldest (Dominic Dowdy-Windsor) and Jan-the-Sly (Grace Langford) are at odds. Sly plans to usurp "father" and bump off Second in order to rule as a despot, and Eldest's majordomo, Jan-the-Wise (Micheal Lowe), is eager to help. Second believes Eldest is wrong to limit exploring, and makes a perilous journey to the surface of the ocean, potentially discovering a new, energy-rich food source. Meanwhile, both Second and Wise also experience strange emotions that aren't hunger whenever Jan-the-Sweet (Larissa White) is around.

"Farmer is excellent" is a phrase I've written many times before now, but it's always true. Doddering and palsied by age, he reveals the strength of Eldest's character when he sings "You Are All My Children," the first of several songs that demonstrate the hidden depths of these yeasts. As the virtuous oldest child Second, Dowdy-Windsor brings an open-faced honesty and goodness; the scene when he breaks through the surface and golden sunlight suffuses the first living being above water on Earth is pure magic, which he conveys through an expression of wonder and amazement (aided marvelously by the heavy dusting of bright blue glitter on his mustache and soul patch). His voice is rich and ringing, a true heldentenor.

Lowe's Jan-the-Wise is a classic villain, smarter than the rest of his community and condescending to almost everybody, but also uncertain on what to do about his unidentifiable feelings towards Jan-the-Sweet, who doesn't reciprocate them. Larissa White is one of the most surprising performers in town; she can look like many different women, and play a bimbo, a hard-edged broad or a fizzy dancing girl, but she always stands out. Masked behind heavy, multi-colored makeup she's nonetheless eminently expressive, exuding untempered hatred for Wise during their duo "Liar," and slowly embracing Second's hope and optimism during "Let Us Rise."

Ultimately, life changes for all these Jans and their tiny corner of the world. How could it not in the aftermath of love? This unlooked-for, unsettling emotion does as much to alter yeast lives as any of the murders, betrayals and new horizons that take place, but this one is a positive change. I felt unexpectedly proud of these little Jans at the end; they are our biological ancestors, and they lived fearlessly in a time of strife and turmoil. That's a hell of a legacy for any sentient being.