Book, music and lyrics by Laurence O'Keefe and Kevin Murphy. Directed by Scott Miller and Mike Dowdy. Through October 24 at the Marcelle Theater, 3310 Samuel Shepard Drive. Call 314-534-1111 or visit www.newlinetheatre.com.

I remember my first school shooting vividly. It's not really mine, but it's the one that stands out above all the ones that followed it. A young man shot two other students at Parkway South Junior High School in 1983; my older sister attended that school. After my homeroom teacher gathered us all together on the floor and told us what happened, I worked myself into a quiet frenzy thinking about her. She asked if we had questions. There were none. How do you go from being an average suburban kid in Ronald Reagan's America — we're winning the Cold War! We have a space shuttle! — to living with the dread certainty that suburban kids bring guns to school to kill other suburban kids? That's not a question I knew how to ask at the time. It's not a question I can answer now.

And yet that is the question that Heathers the Musical orbits. The show, which made its off-Broadway debut last year, is of course based on the satirical 1988 teen comedy Heathers, which starred Winona Ryder and Christian Slater as a high school power couple who murder their fellow students and stage their killings as suicides to cover their tracks. Laurence O'Keefe and Kevin Murphy's witty, and at times beautiful, show goes deeper into the mindset of heartthrob killer J.D. than the film does. The original's dark and subversive edge is still present — hoo-boy, is it present — but there is also a tenderness that wasn't really possible in Reagan's America.

In New Line Theatre's production (the show's St. Louis premiere), directors Scott Miller and Mike Dowdy nurture that tenderness without shying away from the darkness. The result is a show that is sharp and unflinchingly honest in its depiction of high school killers, even with the remove afforded by satire. It is as entertaining as it is terrifying.

Veronica (Anna Skidis) and J.D. (Evan Fornachon) are our troubled and sporadically murderous lovers. She's a high school nobody who recently got in good with the popular clique — the titular Heathers — thanks to her gift for forging hall passes and other sundry documents. He's the leather-jacket-and-combat-boot-clad new kid who punches the taste out of the mouths of school bullies Ram and Kurt (played by the very funny Omega Jones and Clayton Humburg) on his first day. It's a whirlwind romance nurtured over Slurpees and Rimbaud. 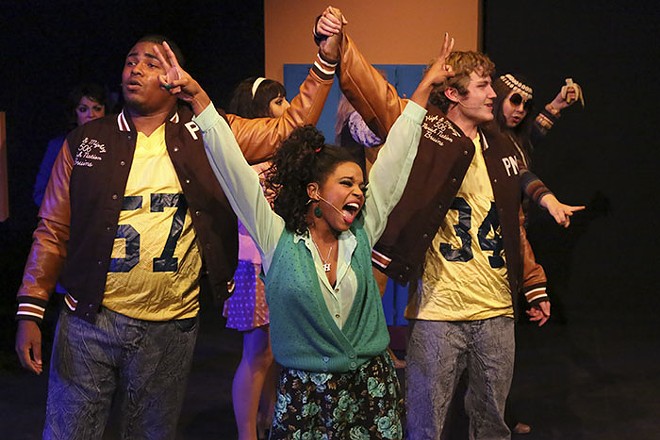 Both Skidis and Fornachon possess preternaturally powerful voices, and they channel them together to illuminate the all-consuming rush of first love in "Our Love Is God." Fornachon sings with a rawness that makes the words sound as if he just thought of them, giving those beautiful lyrics a menacing tone. As good as that song is, the duo surpass it in the soaring "Seventeen," which gives voice to Veronica's yearning for normalcy; J.D. and Veronica have a body count of three at that point, so "normal" is relative.

Heather Chandler — the boss Heather — is first among the dead, as she was first among the living. Sicily Mathenia plays her as a beautiful and cruel despot who destroys anyone and anything that affronts her. That includes her sister Heathers, the ambitious and mean Heather Duke (Cameisha Cotton) and the dim but enthusiastic Heather McNamara (Larissa White). The trio formally introduce themselves in the slinky "Candy Store," which explains their worldview — everything exists for their amusement — and features Duke stealing a brief solo before Chandler violently spins her out of the spotlight to take her rightful place. Duke finally gets her spotlight after she takes over the now two-Heather clique; fittingly, she torpedoes McNamara's own song to do so. McNamara's "Lifeboat" is a tender plea for help that comes so close to opening the hearts of her fellow students but for Duke's power move. Such is the girl-quash-girl world of high school.

J.D. is busy planting a bomb in the school's boiler room at this point. Veronica has foiled his attempted murder of her, and so he plans to go out with a bang. He has lost his first love. He's a motherless child of a brutal and distant father. He's outside everything and against everything, a nihilist who feels only hatred for this world. When Veronica confronts him in one last bid to stop the killing, he's stunned by her willingness to keep living, to keep going to high school. "It never actually occurred to me to build something," J.D. says after Veronica outlines her nascent plan to change things for the better.

This is the first and only answer that has rung true since 1983.