New Line's Ferocious Lizzie Uncovers the Making of a Murderess

It's been 125 years since Lizzie Borden's father and stepmother were killed in the family's New England home, a double murder that captivated America mostly because the crime went unsolved. Lizzie was accused and stood trial, but was eventually acquitted; she then moved back into the family home and lived there until her death in 1927.

The Lizzie Borden at the center of the musical Lizzie, currently being staged by New Line Theatre, leaves no doubts about the identity of the killer: She did it, willingly and happily. Director Mike Dowdy-Windsor helms this raucous production, which fuses a punk rock attitude with slashing, guitar-driven rock. The show weaves together several theories about the case to paint a grim picture of Lizzie's home life. By the end, you feel this was not so much a murder as it was justice deferred too long.

On a shallow stage that evokes a late-nineteenth century drawing room, a barn loft and the standard small club stage, Lizzie (Anna Skidis Vargas) emerges, smoothing down her dress — the first hint that her father is sexually abusing her. Vargas launches into "This Is Not Love," in which she decries someone touching with selfish hands, and asks what kind of life she has when she has no voice. Vargas is a world-class singer, and the way she stumbles into the chorus as if choking confirms for the audience what's been going on.

She takes solace in her older sister Emma (Marcy Wiegert) and in her close friend Alice (Larissa White), whom she often meets in the barn. Just how close they are is evident in the way Lizzie and Alice approach each other tentatively during "Gotta Get Out of Here," almost touching before turning away to howl their frustration into the chorus. Vargas' and White's voices intertwine like Heart's Ann and Nancy Wilson, spiraling upward toward a passion that dare not speak its name — at least, not in 1892. (The illusion of a rock concert is furthered by the wardrobe, which involves a lot of pink and black lace and corsets, along with hand-held microphones.) 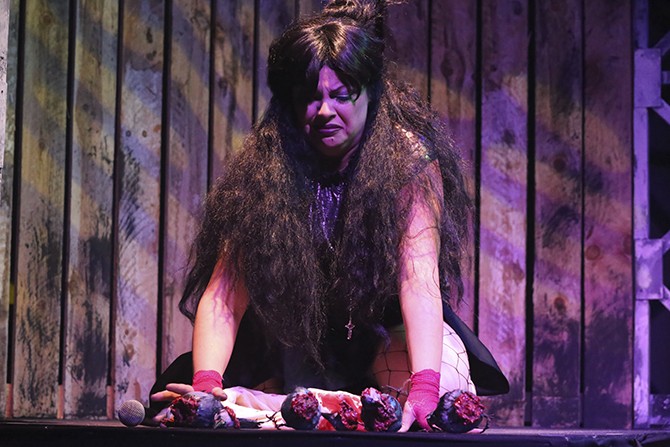 As terrific as the two "dear friends" sound together, there is something primal at work when Vargas and Wiegert sing. The sisters are prisoners of a controlling father who they feel has betrayed them by altering his will so that his new wife — the woman Lizzie and Emma coldly call "Mrs. Borden" — receives all his massive wealth when he dies. There are few options for unmarried women of 32 and 41, respectively, in 1892. Wiegert and Vargas channel that fear and rage into something defiant and beautiful.

Emma, as it turns out, has the beginnings of a plan — she has a book about making household poisons in her possession. But when she leaves for a short trip, the girls' father forces Lizzie into action through a purposely cruel and callous act. On her own, with the maid Bridget (Kimi Short) seemingly hinting that the time is right to do something, Lizzie strikes.

We do not see the act, only the aftermath, as two bodies in shrouds hang on the drawing room wall. But there is no doubt: When Emma asks what happens, Lizzie calmly answers with evident pride, "Somebody came in and killed them."

The second act covers the trial, but the drama comes from the conspirators' fraying relationships, not the courtroom. Lizzie can't keep her story straight, Alice refuses to lie, Emma worries she can't protect her sister and Bridget can't get anyone to eat breakfast. All four power the second act to its conclusion, which hints at happiness but ultimately implies that Lizzie Borden's life was forever shadowed by the events of that day. The final song is an audience singalong of the playground ditty "Forty Whacks." It's a solemn reminder that a woman can get away with murder, but she can never escape society's judgment.