Claire Folger, Courtesy of Amazon Studios and Roadside Attractions Casey Affleck dominates Manchester by the Sea with a performance that has no false moments.

Manchester by the Sea

Lee Patrick, the closest thing to a hero in Manchester by the Sea, works as an all-around maintenance man/janitor for a few apartment buildings. Played by Casey Affleck, he's emotionally untouchable, passively killing time with plumbing and changing light bulbs and hauling trash. He wears a thin coat of anger, but even that, when it finally erupts in a bar fight, seems distant and unmotivated.

When his older brother dies Lee returns to his former hometown, where he learns that he has been named as guardian of his seventeen-year-old nephew Patrick (Lucas Hedges). As he gradually establishes common ground with the boy, fragments of his past emerge. Much of the film is an attempt to reveal how Lee got to where he is, but that discovery itself, filtered through flashbacks, isn't meant as a surprise or a cathartic finish; it's just how he is. It's how everyone is. The most devastating thing about the men and women in Kenneth Lonergan's new film isn't that they're all broken in some way; it's that they barely acknowledge it.

This is a film in which important things are usually left unspoken. Much of its substance rests on the spaces and silences between characters, on performances that seem so perfectly natural, it takes a little time to notice how exact they are. Affleck dominates the film without a single false moment or a trace of artifice, but he's matched by a refreshingly unmannered Hedges. Michelle Williams is painfully good as Lee's ex-wife: At first glance, she's shamefully underused, appearing in flashbacks briefly enough to be dismissed as a cameo, but just when you've nearly forgotten about her, she reappears to deliver the most emotionally raw moment of the entire film.

Lonergan's first film in more than a decade (his earlier film Margaret was filmed in 2005 but held from release until 2011), Manchester by the Sea is tightly focused even when its structure seems almost arbitrary. Random details of everyday life are revealed with precision, and scenes that seem unimportant or even incomplete turn out to have significant but almost subliminal payoffs. What may first appear unnecessary or redundant — the lengthy depiction of Lee's day-to-day activities at the beginning, for example — prove to add to the film's slow but steady rhythm of everyday life.

As a writer, Lonergan has an ear for natural dialogue and ordinary details. As a director, he knows how to give meaning to those same details, to let his cast find humanity in the mundane. In Manchester by the Sea, not much happens but everything matters. It's about people who seem barely able to react to the world around them because they're still reeling from actions of the past.

Matthew Broderick, who appears very briefly as the closest thing Manchester by the Sea has for a villain, plays an almost completely different character in Rules Don't Apply. He's one of many familiar faces (Alec Baldwin, Martin Sheen, Steve Coogan, Candice Bergen, Ed Harris) who wander across the screen in Warren Beatty's strange fantasia about the Hollywood career of Howard Hughes. 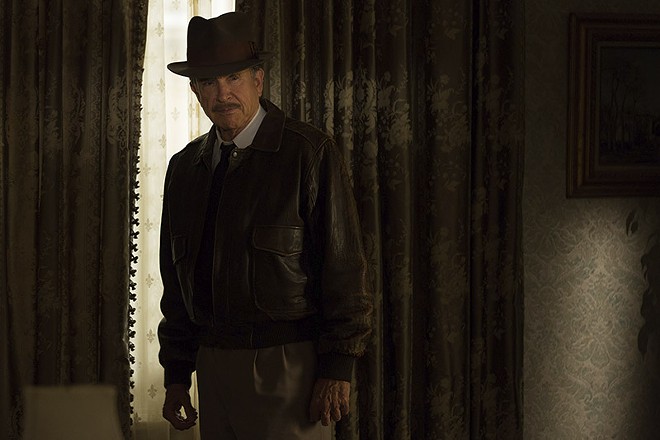 Beatty has long cited a Hughes biopic as a dream project, but like many dreams, this one got a little muddled in the retelling. Co-written by Beatty and Bo Goldman (who wrote a far better film about Hughes 35 years ago, Jonathan Demme's Melvin and Howard), the film deliberately muddles chronology and bends historical detail to create a romantic comedy set in a fairy tale version of a 1950s film studio. In an even stranger decision, they push Hughes into the background (Beatty doesn't appear on screen for the first half-hour), favoring instead a love story between a young starlet (Lily Collins) and a chauffeur (Alden Ehrenreich), both newly hired at Hughes' RKO in 1958. (In reality, Hughes sold his interest in the studio four years earlier.)

Though it takes a considerable amount of time to get there, the last half of the film finally allows Beatty to have fun with some of the odder aspects of Hughes' personality, but it's too erratic to regain the lost balance of the first half. Hughes' eccentricities are just a game, a harmless kind of movie madness. Howard Hughes remains one of the strangest and most fascinating figures in the history of the twentieth century, but Rules Don't Apply reduces him to a supporting role, the wacky uncle running around the house in a screwball comedy.