THEO WELLING Terry Waller with two of her children in the Gravois Park home they rented for more than a year. 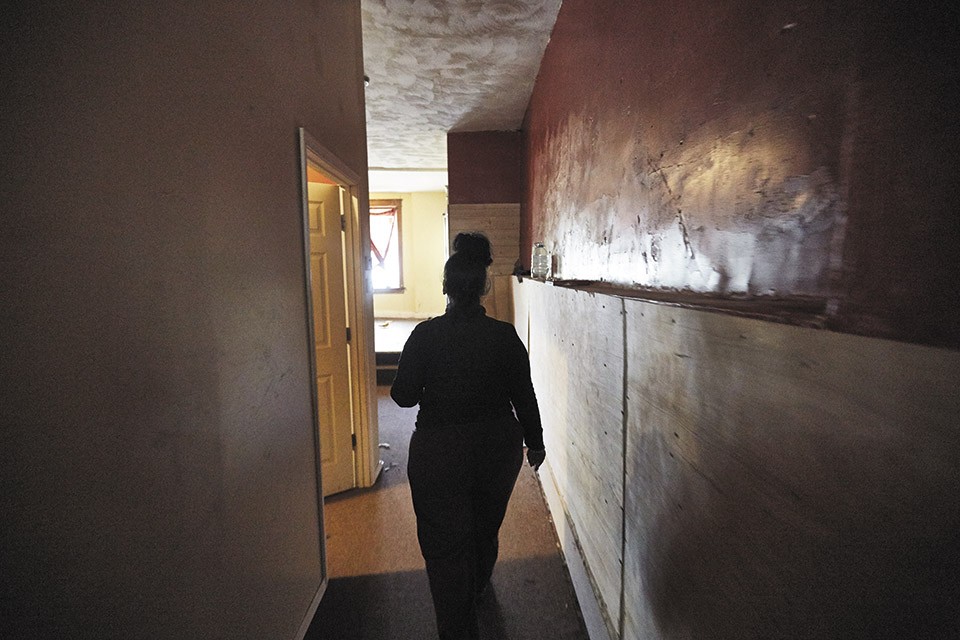 Terry Waller's problem, initially, was that she was in a rush. She left her last place in Gravois Park after a neighbor held a gun to her son. The chances of finding a landlord in south city who took vouchers and had room for all her children were slim. Looking back, she says, "I still wish I would've waited."

"I couldn't have known, right?" she asks rhetorically. "Y'all are the inspectors, you all know Nathan better than anyone."

Cheryl Lovell, the executive director of the St. Louis Housing Authority, says her staff is trained to not direct families in their choice of units. She is wary of infringing on fair-housing requirements. It is, however, within policy to encourage clients to be cautious of unit conditions. "We also suggest that they check the landlord's reputation." Yet there is no formal means to do so.

Lovell says clients pressed for time are often talked into units by the promise to repair things not enforced by the housing authority. "We inform our clients to be aware of these promises because they may not happen." (Says Waller of Cooper, "I was trying to take him at his word.")

Inspections typically only happen before moving in and then every two years after. (Units rented to voucher holders are also inspected separately upon move-in by the city's building division.) Waller sought additional help from the housing authority because of the poor conditions she says she experienced. She resisted calling the building division for an inspection, though, even after her situation with Cooper deteriorated.

"I was kind of scared to call the city," she says. "I called them before about a property a couple of years ago, and they gave me ten to fourteen days to get out, and that honestly scared me — they condemned it."

Over the last fourteen months, the RFT has visited more than 50 properties owned or managed by Cooper and interviewed 32 tenants, in conversations ranging from ten minutes to more than ten hours, checking back in over time. Among them, the conditions at 3118 Chippewa have been the rule, not the exception.

For Cooper, a former state legislator representing Cape Girardeau, south St. Louis has been a strategic focus. He's been accumulating properties since 2007, in neighborhoods hit hardest by the foreclosure crisis, at times making purchases at the tax sale — but only when he can get something at the right price.

As of June 2017, the nine LLCs that Cooper is a member of collectively owned 209 properties in the city of St. Louis, a number that continues to grow as he buys and sells. That's enough to make him one of the most significant property owners in the city. In addition to these properties, the RFT's 2017 analysis found that he manages properties for at least eleven additional companies with holdings in the city.

The properties he owns are almost entirely residential — and a large percentage end up being leased to lower-income tenants with Section 8 vouchers. In 2016 alone, Cooper-owned companies hauled in $908,000 in federal monies from the city and county housing authorities, records show.

Many at City Hall know his name; aldermen on the south side bemoan his practices. Alderman Shane Cohn said in 2017 that Cooper "perpetuated the decline" of some south-city neighborhoods.

But city officials believe taking action presents its own conundrum. In a 2017 interview, 9th Ward Alderman Dan Guenther said, "I'm concerned for the residents potentially displaced if the city were to respond by boarding up all his buildings at once."

Still, Cooper disagrees with the assertion that he targets any particular type of unit, demographic or family size. "I'm not focusing on anything," he says in an interview after the inspection of Waller's house. He does say, though, that he prefers single-family units. "Having two different units together, you end up becoming a psychologist, a peacemaker."

Lovell says the housing authority sees many of the same problems during inspections of Cooper's properties: "Items that seem to be reoccurring are plumbing, broken windows, appliances not working, roofing leaks and floor conditions." She continues, "In our experience, many units do not pass the first HQS inspection."

However, Cooper continues to be eligible within the program. Lovell says, "Mr. Cooper normally corrects the deficiencies, after they are cited on an inspection, within the required timeframe." The housing authority often gives landlords extensions to get properties in line with housing authority standards, she says.

Within an hour of Waller's April inspection, two of Cooper's men start fixing a front door and working down the list of items, preparing for the follow-up inspection the next morning.

The property passes re-inspection the next day, barring one issue with a window. That too is eventually fixed, Lovell says.