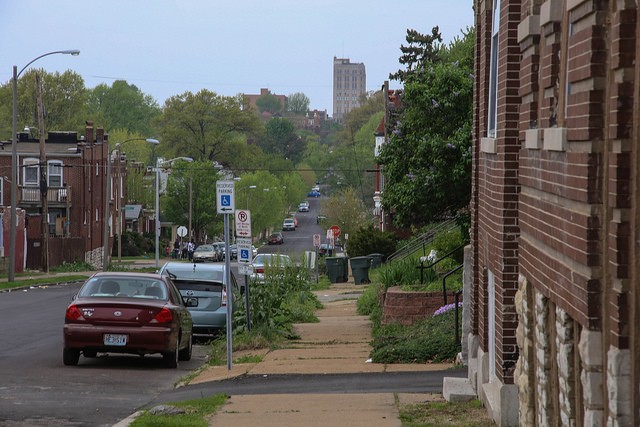 "Take the elevator to the fourth floor for the tax sale!" a deputy calls out as a line forms inside the Civil Courts Building in downtown St. Louis.

It's 8:30 a.m. on a Tuesday in the middle of May. "Check your belongings in the basket and let's keep it moving," he continues. On the fourth floor, outside the courtroom, a cork board holds four pages of newsprint, listing properties for sale. The parcels are being repossessed by the city of St. Louis after three years of missed property tax payments.

Every so often a court clerk comes over to the newsprint with a red marker in hand. A large "X" is drawn through a property, indicating that the owner has paid at least one year of back taxes — retaining the parcels to their name in the nick of time.

The rest go up for auction. In the courtroom, a crowd of more than 150 people grows as the tax sale begins.

Newly elected Sheriff Vernon Betts takes the microphone and addresses the crowd. Applause breaks out. Betts is charismatic. "If I were in church I would say — you can do better than that!" The crowd responds accordingly.

Just a few minutes before, a man in his early forties entered the courtroom, holding a bid card with the number "94" written on it in black. His name is Nathan Cooper; he's no stranger to land tax sales. He wears a short-sleeve light green plaid button-up, neatly tucked into tight dark jeans. Cooper sports thick black frame glasses and a comb-over. He walks to the first row of chairs in the courtroom and sits in one of the few remaining open seats, shuffling through his papers.

Cooper holds three lists in his hand. The first is the city's roster of all properties for sale, the same one posted outside the courtroom. The second is his list of addresses that overlap with his target area — the southeast side of St. Louis. The third lists the sixteen addresses he is willing to bid on, with the few that he finds most compelling bolded.

By the time Betts is done introducing himself, more than 200 people fill the room: parents with their children, recently graduated former fraternity boys in sandals, baby boomers in corporate attire, a heavily tattooed couple in Thrasher t-shirts and tight jeans. All have their lists of properties and bid cards.

The energy in the room escalates as the auction starts. "Order in the court — no more talking!" a deputy raises his voice. "Men take your hats off — clear the doorway!" His instructions work momentarily, but the crowd soon starts buzzing again.

"Only cash, cashier's check and money orders are accepted. There are no exceptions," announces Deputy Laina Favazza. Deputy Favazza started running the tax sales in the past year, and keeps the room in check. "Bids will be taken in increments of $100. I will now begin the auction."

"Stop!" Nathan Cooper is the first to stand and shout, casting the opening bid at $1,963. Several others stand up to join Cooper.

That's when Cooper takes his seat. He's dropping out. Eight bids later, the property sells for $10,000.

When the second property is called, Cooper again stands to bid. The starting price is $1,143. Cooper goes back and forth early, then takes a seat when bidding passes $5,000. The property eventually sells for $7,000.

A few properties pass, then Cooper checks back in. This time, after a short but intense round of bidding, he drops out when his bid of $9,000 is countered with ten.

Zero for three. But he is unbothered, still flipping through his papers, as he waits for the next address on his list to come up for auction.

Cooper's strategy is different from many of his peers at the tax sale. It can be easy to get swept up into the competitive trap of trying to win a bid-off, but Cooper will take a loss if the bidding heats up. He has no problem bailing when the price exceeds his pre-set value estimation.

Going through real estate agents, properties in the city's 20th ward can cost $10,000 to $25,000, pre-renovations, he explains. His goal at a tax sale is to acquire only properties that will come in lower than that.

Cooper's calculated approach likely comes from experience. Records show he's been picking up properties in St. Louis since the foreclosure crisis in 2007. His acquisitions — many of which have cost him less than a typical used car — have made him one of the most significant property owners on the southeast side of St. Louis. In the process, he's become a go-to landlord for many of the city's most desperate tenants.

Yet that role has come with serious controversy. Elected representatives in several city wards chafe at the extent of Cooper's holdings, saying his tendency to do only minimal repairs places renters and the surrounding neighborhoods in harm's way. Even as developers across south St. Louis are buying older buildings and fixing them up — some keeping rent affordable, others not so much — Cooper has been content to do just enough to pass inspection and then let the federally subsidized rent checks just keep coming in.

And he's still purchasing more houses, as his presence at the tax sale makes clear. Buying in this setting, however, puts him at a disadvantage and he knows it. Potential buyers are only allowed to view properties from the outside and must gamble on the conditions inside, including the structural integrity of the building.

By Cooper's calculation, buying at the land tax sale offers him the opportunity for a slim few thousand dollars off the open market rate in exchange for that risk. "Is it worth it? No, I don't think so," Cooper says.

Yet over the course of the morning, Nathan Cooper places bids on sixteen properties. In certain cases —when, for example, he already owns properties on the same block — the tax sale is still worth it to Cooper.

He successfully bids on three properties, all of them within Gravois Park.

As the auction wraps up, Cooper takes the elevator up to the 8th floor. Once there, he opens up a backpack and begins flipping through a thick wad of bills. He slides a pile of cash under the Plexiglas window to the clerk on the other side.