Presented by Mustard Seed Theatre through February 12 at the Fontbonne Fine Arts Theatre (6800 Wydown Boulevard; www.mustardseedtheatre.com). Tickets are $30 to $35.

It's not uncommon to walk out of a play and feel like your view of the world has been changed. That's the whole point of going to the theater, to make you reconsider the world from someone else's point of view. Mustard Seed's current production of Yasmina's Necklace, by Chicago-based playwright Rohina Malik, is the first time I've left the theater with a brain full of insights and a keener awareness of other people's lives, only to get home and discover that most of America was now grappling with the same issues in real time, thanks to a cowardly executive order by President Pissbaby.

Yasmina's Necklace, which made its world premiere just last month in Chicago, is about two immigrant families meeting in America and trying to make a life in a country that sometimes doesn't want all the foreigners it has spent two centuries inviting. Yasmina (Parvuna Sulaiman) and her father Musa (Amro Salama) are brand-new to America and struggling to adjust. After surviving civil war in their Iraqi homeland and the chaos of ISIS in Syria, a crappy mouse-ridden apartment in Chicago is at least stable, if not ideal. It's a shame nobody believes Musa's career in dentistry is viable because he was educated in Iraq — it's just another indignity immigrants face in America, and he's positive things will get better.

Meanwhile, Abdul Samee Lopez Hassan (Adam Flores) is the recently divorced and very Americanized son of the Iraqi immigrant Ali (Chuck Winning) and Puerto Rican Muslim Sara (Maritza Motta Gonzalez). He's currently disappointing his parents by changing his name to Sam to better get ahead at work. "I was born with the wrong name, the wrong family and the wrong culture," he shouts at them. Ali and Sara will drop the subject if he agrees to meet a young Iraqi woman, who the Imam (Jaime Zayas) has suggested might be a suitable bride — not like Sam's unfaithful, non-Muslim ex-wife.

And so Yasmina and Sam and their parents meet with the Imam in tow, and everyone is awkward and embarrassed and disappointed. Still, Sam likes Yasmina's paintings, and things slowly progress toward something promising — but Yasmina has seen some serious shit, which eventually throws a wrench in everything.

Malik is herself an immigrant (born in London to an Indian mother and Pakistani father, she came to the U.S. as a teenager). Her script shows a side of Muslims that America doesn't see, including the warmth of family life. Their private lives are very familiar; Sara and Ali are sharp and funny with each other as they disagree about how to help their boy get over his heartbreak and his cultural shame. Musa pleads with Yasmina to wear a more colorful headscarf for the meeting, but she shuts him down with "the black hijab reflects my personality," and she's only slightly teasing. An arranged marriage is part serious business, part sitcom. The Imam is a joyous Venezuelan who, when asked for some words of wisdom, pauses and gravely announces, "I...am on the paleo diet" to a bemused Ali and Musa. 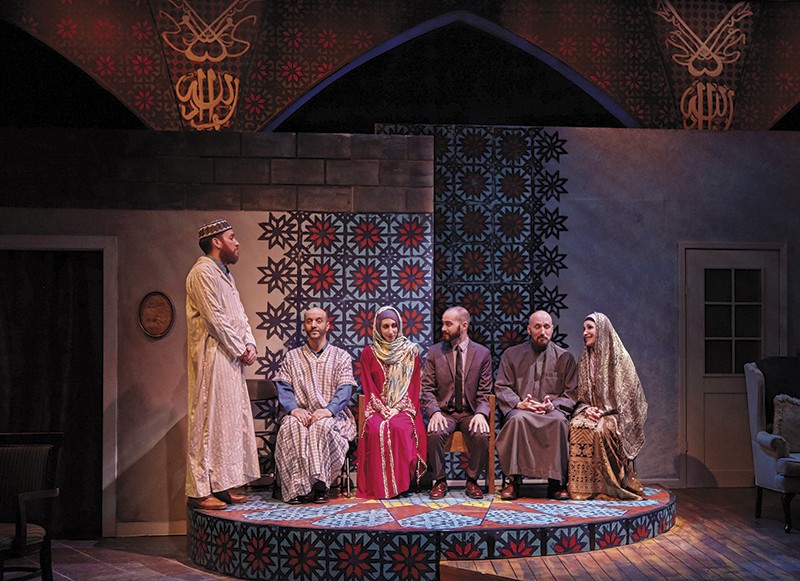 Everybody is excellent, which is a hallmark of Deanna Jent's direction. Gonzalez captures Sara's keen mind and deep love for both her homeland and her adopted religion, while Winning earns laughs with his tendency toward long-windedness. But when Ali stays on point, he's just as astute as his wife. He claims that because all the educated people have escaped Iraq, only the ignorant are left, "and what kind of country can be run by the ignorant?" (Personally, I'm not enjoying finding out how that works.)

But the stars are Sulaiman and Flores, who progress from mutual antagonism toward something very much like love during the course of the year covered by the play. Together they are tender and cautious, but hopeful. Sam struggles to embrace his heritage, which he feels marks them both as alien and potential targets for bigots. Yasmina draws her strength from her homeland, which is never far from her mind.

Yasmina's Necklace is compelling and beautiful, and it deserves as wide an audience as possible. It shows us that love can heal our human hurts, and that love can make you courageous. And it shows us what we're losing when we close our borders to dentists and artists and playwrights and all those people who believed what we said about being the land of the free and the home of the brave.