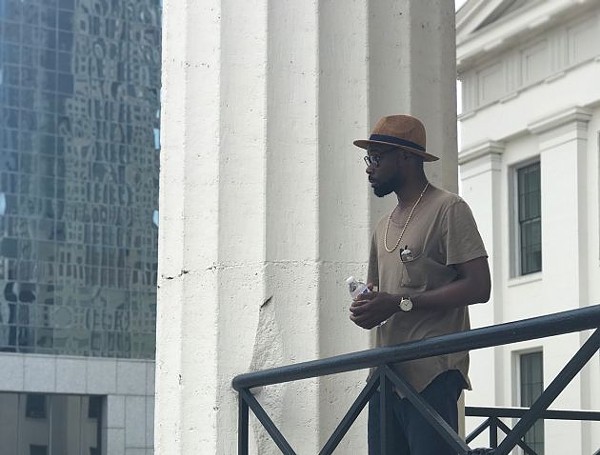 In a lot of ways, Brandon McCadney's story is not that different from many post-collegiate twenty-somethings. After graduating college with a degree in public relations, the 24-year-old St. Louis native floated in and out of communications jobs and freelance gigs while his true passion — making music — withered.

"When I tried to do music last year I could not create — it wasn't quality because my focus wasn't solely on it," he says. "It wasn't until February of this year that I dropped everything I was doing on the side to go all-in for music."

While McCadney still has a day job as a communications specialist for the Ferguson-Florissant School District ("That's something else I'm passionate about — telling stories about students and their achievements," he says), he's been able to pour more of his time and energy into his musical alter-ego Mad Keys. His debut LoveWaves sees its release this week; the five-song EP is a mix of vibey instrumentals and syrupy soul tracks with a few guest vocalists. Even this brief collection introduces a producer and songwriter capable of using and mutilating familiar R&B textures.

The moniker "Mad Keys" stems from a high school nickname — a young McCadney went to town on a piano during music class at Hazelwood Central and the name stuck. It's only a slight misnomer, given these tracks' smoothness; he's more apt to stretch out on a creamy Fender Rhodes lick or punctuate a track with a slightly buzzy synth pad. But on the instrumental "Milk & Honey," as he pushes a stuttering electric piano line against an erratic, slapping beat, the listener gets the sense of the nickname's origin.

And though keys and beats fill in most of the space on LoveWaves, the first sound you hear is that of McCadney's primary instrument — the violin. On opening track "Blossom," a dramatic violin filigree gets mangled by distortion and taken into hyper-speed overdrive before dissolving into a soft bed of electric piano. The introduction serves as a warning that typical lounge grooves and Soulquarian vibes are subject to interpretation.

He began playing the violin in fourth grade. McCadney took inspiration from jazz legends like Jean-Luc Ponty and Regina Carter, who used the traditional instrument in atypical ways.

"I wanted to find a way to merge that element," McCadney says of the violin. "When you think of violin you think of symphonies — I was in the symphony back in undergrad. It's a great experience of playing with other professionals; I learned a lot from that. But when it comes to implementing that with my own music, I wanted to create melodies that I hear in my head. I'm able to find ways to interject the violin into it."

McCadney avoids direct vocalization on this EP ("I can't sing!" he says with a laugh) but instead uses a vocoder to process and other-ize his voice on few tracks, most notably on "Beta." It's his take on OutKast's "Prototype" with a few sly lyrical changes — though those lyrics get so modulated through the vocoder's machinery that the tone pierces the cloudy chords of the backing track. "Being able to do what I do with the vocoder makes me happy, knowing that I can do that and that I have the freedom to create and be that versatile," McCadney says.

Since he's more comfortable as a producer than lead singer, McCadney populates the rest of LoveWaves with guest vocalists Orlando Vaughn and Teresajenee. On the Vaughn-led "Goliath," McCadney says that the final track is the result of a back-and-forth collaboration; Vaughn took the demo version and offered his own arrangements as well as his vocals.

When McCadney approached Teresajenee, he admits to having some nerves in sending that initial email. "I've always wanted to work with her ever since she released Electric Yellow," he says. "She's one of my inspirations when it comes to creating music. I love the combination of her boom-bap sound with electronics — I've always wanted to get there." Her performance on "Love Ultra" ends the EP on a high note, with Teresajenee's always-controlled vocals holding the center against booming kick drums and undulating, percolating synth.

If McCadney's mid-twenties journey began in the usual mix of confusion and ambition, he's been quicker than most at righting his ship. "I was missing out on my purpose," he says. "The way I overcame it was understanding the passion I've had from the jump — it was music.

"My message with this project is to show people that you don't have to have it all together," McCadney continues. "It's OK to take your time. I'm 24 — I'm just beginning to figure it out. I don't have everything figured out, but I know what's important to me."