STEVE DIETL/NETFLIX​ Florence and Hap Jackson (Mary J. Blige and Rob Morgan) have enough trouble with their Mississippi farm -- and then the white McAllan family arrives.

It's a telling sign of the rapid transformation of media distribution that Mudbound, a film appearing on schedule for awards season, will have only a limited theatrical run (it opens on a mere twenty screens in eleven cities on Friday; St. Louis isn't one of them), while simultaneously premiering on Netflix. I don't pretend to understand the economics of film distribution, nor do I see any point in reviving the old big-screen-vs-little-screen debate. What matters is that Mudbound is a powerful film that deserves to be seen — on whatever screen you find it.

Directed by Dee Rees and based on a novel by Hillary Jordan, Mudbound is an intimate epic, a story of two families living on a Mississippi farm in the 1940s. Both struggle with their crops and with facing a world in which long-standing ideas about race and class are changing — but not at the same pace.

The complex game of social standing gets even trickier with the return of two war heroes: Henry's charmingly dissolute brother Jamie (Garrett Hedlund), and the Jacksons' oldest son Ronsel (Jason Mitchell). The former has little interest in farm life aside from his attraction to his sister-in-law, while Ronsel is unsettled by the South after years in Europe, where his race was never an issue or a burden.

Despite the historical setting and varied locations, director Rees stages the action with a remarkable economy. It's a period film without unnecessary set decoration or false nostalgia; even the war scenes are staged with efficiency. The time and place are important, but Rees isn't interested in scenery or trivial details. Mudbound isn't a historical film in the usual sense; it's about how peoples lives are marked by the time they live in.

The result is an intricate fabric of individual stories and ambitions, told from a fluid collection of narrators. Nearly every character offers an off-screen commentary, providing his or her own perspective. This is not entirely new — Scorsese has used shifting narrators many times — but the effect here is almost ethereal. Are the characters speaking as part of the story — "this is what I'm thinking right now" — or are they coming from some place outside of it? The voices give their lives a haunting level of intimacy, recalling such literary companion pieces as Our Town and Spoon River Anthology. 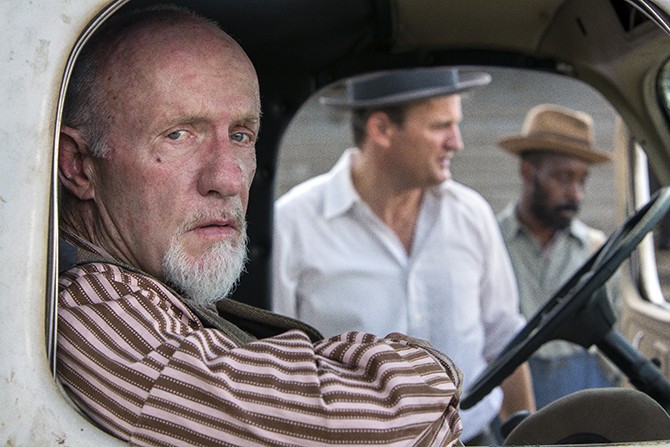 With its emphasis on human behavior and psychology over action, on morality over melodrama, Mudbound has a classical feel, evoking post-war films like Giant and East of Eden. As with those films, Rees pushes her cast to capture conflicts both large and small, and is rewarded with excellent performances from her strong ensemble. The hard-headed Jason Clarke recalls beefy leading men of the '50s, such as Rod Steiger and Van Heflin, while Carey Mulligan and Garrett Hedlund balance his stubbornness with a lighter, almost cynical tone. Mary J. Blige is powerful (and unrecognizable) as the maternal Florence Jackson; while father and son Rob Morgan and Jason Mitchell come face to face with social injustices, Blige deflates them just as thoroughly with a withering silence.

Which brings up the inevitable: Mudbound is — obviously — a story about racism, how it affects everyone from the most overt bigot to those who think they are above such feelings. Racism is part of the environment; it hangs over every scene and shapes every action from displays of hatred to demonstrations of friendship.

It may trouble some that we're still telling these stories 150 years after the Civil War, nearly a half-century after the murder of Martin Luther King, long after historians closed the books on these events and theorists tried to argue that we've become a "post-racial" society. But by recreating the hearts and minds of those living in the maze of a racist society, not simply relying on pronouncements of the past or a recitation of laws passed and ignored, Dee Rees has given us a timeless story of our flawed, painful human history.