Ari Ellis has worked for a James Beard-nominated chef, could school you in the art of butchering a whole animal and makes some of the best sausage in town. Yet at her latest venture, Morning Glory Diner, she's topped herself by doing something so impossible — so utterly mind-blowing — it will go down in St. Louis breakfast lore.

She's made a non-greasy slinger.

Ellis' version has all the components of the St. Louis hangover classic: burger patty, hash browns, eggs, chili and cheese. Here, however, the high-quality ground meat is juicy but not greasy, forming a deliciously beefy base for layers of hash browns. Unlike other area diners, Morning Glory's potatoes are cooked in real butter (not unctuous liquid butter alternative), which gives them a crispy, golden exterior and a soft, steamed interior. Perfectly cooked eggs rest on a nest of hash browns, and the entire dish is covered in a mildly spiced vegan chili, laden with chunks of fresh vegetables and beans. Should you overindulge and finish the entire portion, you'll be surprised by what greets you at the bottom of the bowl. Instead of that characteristic orange oil slick, you'll find a clean, white dish — and, more importantly, your dignity.

The slinger is emblematic of what Ellis is trying to achieve with Morning Glory, the Cherokee Street breakfast and lunch spot she opened this past Valentine's Day. A longtime fan of the classic diner, Ellis has often found her love for the concept at odds with the off-putting reality of eating in a room coated in layers of yellow cooking grease and cigarette smoke. For her first, stand-alone restaurant, she was determined to bring to life a place that could evoke the nostalgia and easy comfort of the quintessential diner experience without the grit.

Though Ellis had fleshed out the details of what she wanted her dream diner to be, she was not planning on actually opening one anytime soon. Instead, she was content running her artisanal sausage counter, the Cut, inside the Fortune Teller Bar and getting the hang of what it was like to own her first business. However, when neighboring Vista Ramen announced it was closing its doors, the owners approached Ellis to see if she would be interested in taking over the space. Unable to turn down such a choice opportunity, she said yes, accelerating her timeline to stand-alone restaurant ownership, according to her estimate, by about five years.

One of the reasons Ellis felt she could not pass on the offer was the location. The Vista Ramen space was not only beautifully appointed, with eye-catching black and green mosaic tiles, exposed wooden beams and a cool, vintage mural painted on an exposed brick wall, it was also set up in classic diner style. The open kitchen, occupying the entire back length of the restaurant and facing outward, seemed tailor-made for a diner — the sort of clean, aesthetically pleasing diner she'd always envisioned.

Because the space was in tip-top condition, Ellis made few changes. Save for a clean coat of paint, a jukebox (whose catalog, she insists, is still a work in progress), a chalkboard menu and some diner-centric décor, the dining room remains almost exactly the same as its previous incarnation. But the aesthetics are not the only thing that the four-month-old diner has in common with Vista Ramen. Just like the critically acclaimed restaurant that came before it, Morning Glory is utterly magnificent.

Ellis jokes that she and her team have perfected the "quick drip coffee," a nod to their down-to-earth approach to daytime dining. Refreshingly, there is nothing ironic about Morning Glory — it's not a nod to a classic diner; it is a classic diner, only cleaner and with better-quality food. In that spirit, you won't get coffee made from single origin beans prepared using fussy brewing methods. You're getting a cup of hot-plate, glass-pot coffee, brewed thick as mud and requiring loads of cream and sugar.

You're also getting a simple breakfast sandwich, served on grilled wheat toast with silken scrambled eggs, molten American cheese and a housemade sausage patty laden with sage and kissed with just a hint of peppery spice and sweetness. The sausage is so thick and juicy, it's like eating a breakfast patty melt. 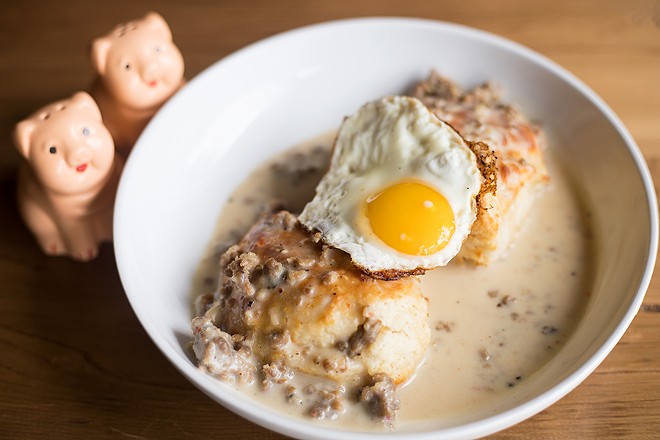 That same sausage makes an appearance in the biscuits and gravy, this time crumbled into creamy, black-pepper-spiked gravy that is rich, but never crosses the line into overly decadent. Ellis' biscuits are buttery and fluffy but provide enough heft to hold up to the gravy. Like the slinger, this is an indulgent, filling dish, but it allows you to enjoy it without delivering a punch in the gut.

Ellis worked under fried chicken master Rick Lewis at both Quincy Street Bistro and Southern, so it's no wonder she picked up some serious fried bird know-how. At Morning Glory, she serves her succulent, cornmeal-encrusted chicken over Johnny cakes — a beautiful sub for the more common waffle pairing. They taste like corn muffins that have been flattened and fried. Gilded with a dollop of tempered butter and maple syrup, the dish becomes a masterful mix of sweet and savory that showcases the beauty of cornmeal.

You can also enjoy her fried chicken as the centerpiece of a wonderful lunchtime sandwich, nestled onto a bun and simply adorned with lettuce, tomato, pickle and onion. Though Morning Glory does not advertise which cut of chicken you'll get, I was treated to a boneless thigh that was so juicy it soaked into the bun. I could see why she chose not to top the sandwich with a sauce.

Fried is not the only way to enjoy a chicken sandwich at Morning Glory. On one visit, Ellis offered curried chicken salad as a special; large hunks of white and dark meat were blanketed with warm, yellow curry-infused mayonnaise. Instead of finely chopping up an apple and throwing the pieces into the mix, Ellis instead opted to slice the fruit and place it atop the salad as a garnish. This resulted in a thoughtful layer of flavor and crunch that would have otherwise been lost.

Morning Glory would not be a diner without a classic cheeseburger, and Ellis doesn't disappoint. Hers is a slightly thicker version of the smash-burger griddled variety, topped with a slice of American cheese and placed on a griddled bun. There are more over-the-top decadent burgers in town for sure, but this does a fine job representing the classic diner-burger genre.

One of the best parts of Morning Glory delivering such non-greasy, greasy spoon fare is that you feel well enough to have dessert. This will likely involve some type of muffin — on my visit, a rustic, whole-grain blueberry one crowned with a layer of brown sugar crumble — and a freshly baked pie. If you are lucky enough to be there on a day Ellis serves blueberry pie, do not hesitate; the gooey blueberry filling is so insulating, it retains its warmth from the oven for hours, radiating a gentle heat that warms the soul as much as your tongue. 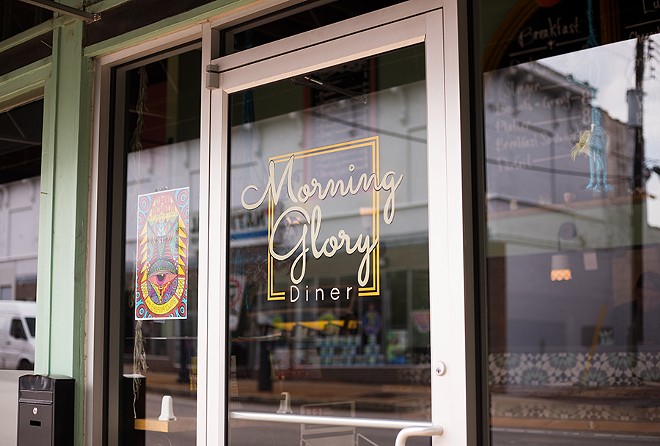 A piece of pie and a cup of coffee. Bacon, eggs and a slice of toast. Morning Glory is laudable because it offers well-executed versions of what we want to eat when we wake up craving a leisurely breakfast. And Ellis leaves these classics alone, resisting the urge to "elevate" them into a fussy approximation. As she smartly realizes, some things are good enough the way they are — well, minus the grease.