It was December 21, 2020, and things were finally looking up for Jason Norman. The 45-year-old inmate was settling in at his new home in the Algoa Correctional Center, a minimum-security state prison on the outskirts of the capital in Jefferson City.

His recent move from the state prison in Boonville meant more than a change in scenery: He'd been selected to join the prestigious "inmate trustees" who worked in the governor's official residence, an opulent Victorian mansion overlooking the Missouri River, just a few minutes' drive from the prison. Being a trustee involved a rigorous selection process, and if chosen, Norman would earn $2 an hour.

Norman had come a long way since his 2003 arrest. Now, more than seventeen years into a twenty-year sentence for drug trafficking, he'd earned a chance at a kind of freedom, if only within the mansion's kitchen or as a maintenance worker on its grounds.

Arriving in Algoa in November, Norman was told to wait while prison officials made their final review of the incoming trustees. Four days before Christmas, he was still waiting.

"I was there 30 days," he recalls, "and that day I was in my cell, locked down for the count, and an officer came to my door."

The guard told him that he was needed "upstairs" in the prison's probation office. It was a strange request: Norman wasn't eligible for parole, the result of a uniquely harsh Missouri sentencing law that targets drug offenders with prior felonies.

The meeting with the parole officer lasted only minutes. When Norman left the office, he knew one thing: He wasn't going to be working in the governor's mansion.

Governor Mike Parson had gotten to him first. That day, while Norman was killing time in his prison cell, Parson was signing his commutation papers. One week later, Norman was released from prison on a modified house arrest, technically a "partial commutation" that allows him to serve the rest of his sentence as he works to rebuild his life in the small town of Marshall. His movements are monitored by a GPS device on his ankle. He spends his days driving a tow truck and his nights at home.

"I thought it was a done deal, that I'd have to serve out the rest of my time," he adds. He points out the obvious, that without Parson's action, he was facing at least two more years of prison before he could qualify for conditional release. Those were years he couldn't afford to lose. As he enters middle age, he's already spent most of his adult life in prison.

"I'm just thankful," he says. "I'm very grateful that the governor chose me. It's like hitting the lottery."

Norman wasn't the only inmate surprised on December 21. That same day, Parson ordered commutations for two other drug offenders, both trapped in long sentences through the same "no parole" sentencing enhancement that affected Norman.

But the issue is much bigger than three cases. According to recent prison records, Norman is just one of more than 200 drug offenders serving no-parole sentences under an unusual state drug law that for decades has skyrocketed sentences and barred legal avenues for early release.

For those still in prison, freedom isn't like a lottery. Their odds remain static, frozen at zero.

That's not true for most Missouri prisoners. The vast majority of inmates — including prior offenders and felons — are eligible for parole after serving about 25 to 50 percent of their sentence. In fact, of the roughly 84,000 people under the oversight of the Missouri Department of Corrections, only 24,000 are in prisons. The remaining 60,000 people, all convicted criminals, are on probation and parole, serving their sentences as productive, if restricted, members of society while saving the state money on prison costs.

And yet hundreds of Missouri drug offenders are serving sentences so long that their punishments rival those of murderers. The cause is a criminal statute defining "prior and persistent drug offenders," a sentencing law so extreme that in 2014 a bipartisan group of lawmakers successfully repealed it — but only partially. The repeal, which went into effect January 1, 2017, doesn't cover drug offenders already convicted under the old "prior and persistent" sentencing laws.

Since 2013, in multiple investigations and cover stories, the Riverfront Times has documented the devastating impact and strange aftermath of this particular drug law, revealing the stories about the prosecutors who wielded it, the offenders sentenced by it and the people who have devoted years to fighting its hold.

What remains true in 2021 is that the repeal left out those most affected by the massive prison sentences, creating a segment of Missouri's prison population for whom punishment is set in stone.

The impasse has left inmates and their families struggling to find hope. As it turns out, it's a problem that Missouri's governor can fix with the flick of a pen. 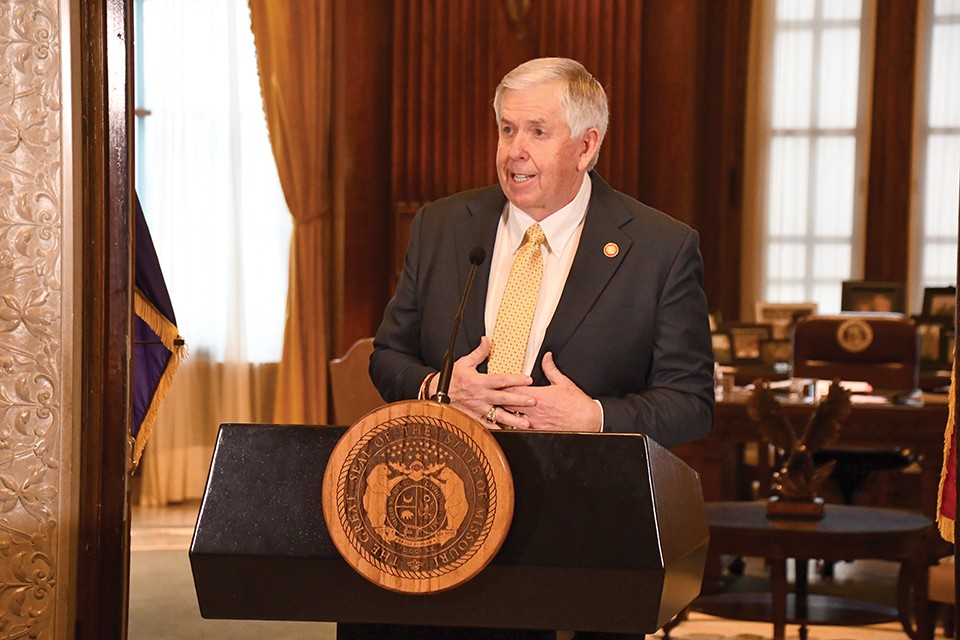 In his December 21 announcement, Governor Parson, a former sheriff, managed to invoke the generosity of the holiday season while still appearing to draw a hard line on crime.

"This is the time of year for forgiveness," the statement noted. "There must be serious consequences for criminal behavior, but when individuals demonstrate a changed lifestyle and a commitment to abandoning the ways of their past, they should be able to redeem themselves in the eyes of the law."

Parson remarked on his decision to commute "three prior drug offenders," noting that the law that made them parole-ineligible had been repealed. The "limited commutation" documents he signed ordered them restricted to house arrest, subject "to any terms and conditions imposed by the Parole Board."

Buried among more than 3,600 clemency applicants, it's not clear why these three cases wound up on Parson's desk. And while the governor's office did not provide details on the selection process, it's notable that two cases, including Norman's, were represented by attorney Kent Gipson. Gipson tells the RFT he submitted a list of more than a dozen names to the governor's chief legal counsel in early December, highlighting "egregious cases where nonviolent people got excessive sentences."

Gipson suggests that the selection may have had something to do with the three inmates' history of rehabilitation; all three provided long resumes of treatment and education programs, along with "spotless disciplinary records."

"I think that might have been it," he offers. "It was like picking the head of the class."

Whatever the process, Parson is starting to make his priorities known. After being appointed governor in 2018, he inherited thousands of unaddressed applications for clemency. Now, three years into his administration, he's used the commutation power of his office on a total of seven cases.

Before December, Parson had issued just one commutation, awarding former drug dealer Dimetrious Woods a "partial commutation" that prevented him from being sent back to prison. Woods, the subject of a March 2020 RFT cover story, had been "erroneously released" on parole in 2018 after he successfully challenged his parole status, arguing in court that the repeal of the old "prior and persistent" sentencing law now gave him the right to appear before a parole board.

Then things got messy. At first, a circuit judge agreed with Woods, ordering his release, but the same judge went on to reject identical arguments filed by drug offenders who tried to replicate Woods' success. Into this mess came Josh Hawley, who was the state attorney general at the time before being elected to the U.S. Senate. Hawley insisted that everyone involved belonged in prison. That included Woods, who had used his two years of "erroneous" freedom to start a window-tinting business and food truck in Columbia.

The case eventually went to the Missouri Supreme Court, which sided with the attorney general: The 2017 repeal of the "prior and persistent drug offender" statute was not retroactive. For hundreds of inmates, parole remained out of reach.

That's when Parson stepped in. In April 2020, Woods stood in the governor's office in Jefferson City and watched Parson sign his commutation, which effectively saved Woods from being sent back to prison to serve the remaining twelve years of a 25-year sentence for drug trafficking.

What Parson didn't announce at the time, and which the governor's office only now confirms, was that Woods wasn't the only prior drug offender Parson saved from going back to prison in the spring of 2020.

As noted in later appeals, Parson quietly commuted the sentences of two additional inmates, Berry Livingston and Kevin Riley, both convicted drug traffickers who had independently used Woods' argument to gain parole in 2018. In 2020, when Missouri wanted to drag them back to prison along with Woods, Parson intervened.

James Norman had tried the same tactic. Years before his transfer to Algoa, he and Woods shared a housing block in the Jefferson City Correctional Center. They'd bonded over their shared predicament, trapped by Missouri's unyielding drug laws. After watching Woods win early release, Norman had filed his own petition to restore parole eligibility .

But he was too late. The window had already closed.

"They gave me an immediate 'out' date, within 30 days," Norman recalls. "I'd already switched my mindset to going home, and two days before my release, the attorney general stopped it."

"That was horrible," he adds.

And if not for Parson, it's a horror that Norman would still be living in the Algoa Correctional Center. Asked what he'd tell the governor today, Norman says he would thank Parson "for giving me a chance to start my life again."

But there's another thing Norman wishes he could bring up to the man who saved him: "Please, don't stop at me."