This week, the country's most talented drag queens converge for four intense days of competition, capping off months of preparations on Saturday, when just one will be crowned Miss Gay America. And you won't have to go far to get your share of sequins, glitter, false eyelashes and tears of joy: After moving cities every year or so across its 47-year history, the country's oldest and largest female-impersonation pageant has found a forever home in downtown St. Louis.

The pageant's owners are husbands Michael Dutzer and Rob Mansman. The Baltimore residents opened St. Louis' revamped Hamburger Mary's franchise last year in a huge downtown space, specifically with a mind to having it host their pageant.

"It never really had a home," says Dutzer. "We decided to give it a permanent home in St. Louis."

Doing so allows performers to become familiar with the venue. And having a year-round home base lets the pageant's charitable arm get established and do more. The MGA Excellence Foundation seeks to mentor LGBTQ youth. "Mary's gives us that stage and that platform to get the message out there," says Dutzer. 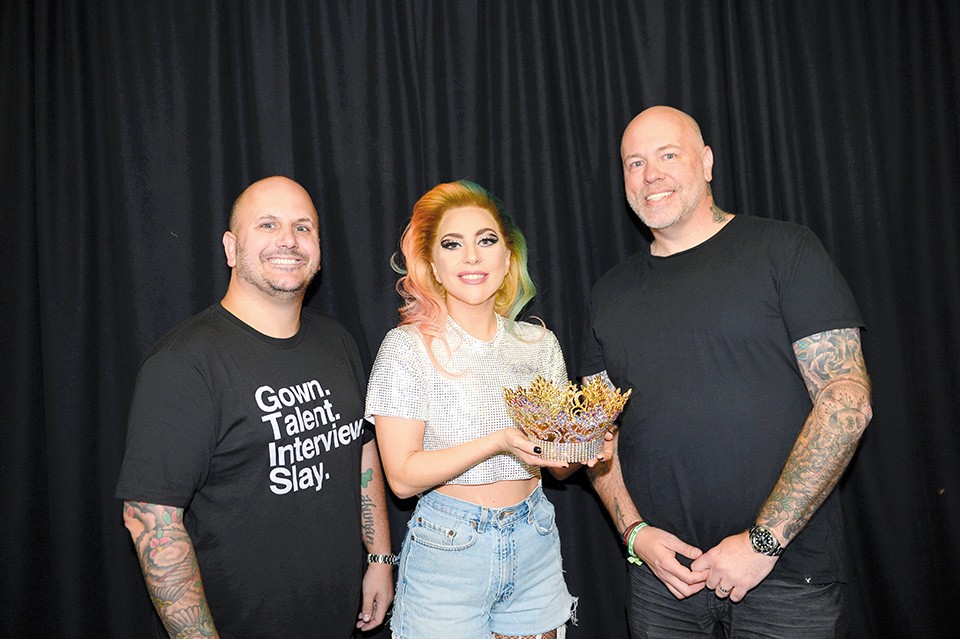 There are practical reasons to settle down as well.

"It's very expensive to run a pageant," Dutzer explains. "When you don't have a home such as a bar or something, it's hard to get corporate sponsorship. Hamburger Mary's gives us a chance to promote a brand year-round."

The pageant dates back to 1972, with the crowning of Norman Jones as Norma Kristie at the Watch Your Hat and Coat Saloon in Nashville. Since then, drag queens compete each year in state and regional feeder pageants, vying for glory and prizes: $10,000, jewelry, vacations and the ability to book club dates almost anywhere as the reigning Miss Gay America.

Contestants face off in five areas: male interview, where the judges interview contestants outside of their drag persona; presentation, where the queens display a costume in keeping with the year's theme (this year, "Fantastical Creatures"); evening gown; on-stage interview; and talent.

The male interview is one thing that makes Miss Gay America unique among pageants. "This is one where they want you to be comfortable as a man, and in the illusion of a woman," says Vivian Vaughn, Miss Gay North Carolina 2015. "Society is always driving you to pick one.

"I've struggled with femininity versus masculinity," Vaughn adds. "This pageant has taught me that you can really truly completely embrace both."

No contestant can have body modifications below the neck or be taking feminizing hormones. This wouldn't necessarily exclude transwomen. Dutzer says that if a contestant was living daily life as a woman without hormones or surgery, she could compete — though the male interview portion might be a little awkward.

But traditionally, the pageant has showcased gay men competing as their feminine alter egos.

The rules, Dutzer says, put "every contestant on an equal playing field. We require them to present the full illusion." In the context of the pageant, that means cleavage comes from padding, tape and highlighter instead of silicone.

Winners serve as administrators for feeder pageants and use their elevated profile to promote charities. Competitors say that the pageant is foremost a family. It's also a lot of work, and it polishes skills that continue to serve them offstage.

Vaughn, for one, credits her work in the pageant system with turning her life around. She was a high school dropout, and the pageant system taught her the value of setting goals and putting in work, which led to her becoming the first person in her family to graduate from college.

Outside of pageant life, these days she has a busy career in logistics.

"I'm now running an entire department in a very successful company," Vaughn says. "A lot of those skills, I used being Miss North Carolina. I had to go and be interviewed in front of a panel to get the job, and they fell in love with me."

Pageant participation is rarely one and done — it's a multi-year investment. Carl Glorioso, who won the national crown in 2009 as Victoria DePaul, is a good example of how these efforts take time.

"Once I started competing, I never stopped," says Glorioso. "I did my homework, I surrounded myself with the people I could learn the most from."

The lead-up to the qualifying pageants each year reaches a summertime crescendo of rehearsals, fittings, hair and makeup, raising and spending money, and ceaseless other preparations. And for most contestants, it ends in defeat.

"When you have all of that invested, the years you may not win can get very discouraging," Glorioso says.

But almost no one wins their first time out. Instead, the years of competing allow contestants to hone their craft and to learn exactly what makes someone Miss Gay America material.

"I did my city preliminary in 2004, and I was horrible!" recalls Vaughn, who finally won the 2015 Miss Gay North Carolina America after years of competition and finally taking city and regional qualifiers in 2012 and 2013. "Clearly I had a lot to learn."

For that, she credits what could seem like an unlikely source — her fellow competitors.

"A lot of the time you hear about cutthroat behavior in pageants," says Vaughn. "That wasn't what I experienced at all."

Indeed, Janessa Highland, who was crowned Miss Gay Missouri America this spring at Hamburger Mary's, says she's in touch with queens she beat in preliminaries. Some have helped arrange fundraisers to pay the steep expenses associated with competing.

Victory can be bittersweet.

"It's more about the journey than the end result," says Glorioso, the 2009 title holder. "After I won Miss America, I had one of the best years of my life — I loved it. But something was missing — that competitive piece you do every year. It's like 'Oh gosh, what next?' You're used to this taking up your whole Halloween season." 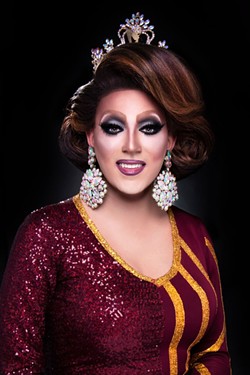 Glorioso will bring Victoria to the stage in St. Louis for the pageant, but not as a competitor. She's performing each of the four nights in celebration of the tenth anniversary of her victory.

As for Highland, she is this year's local favorite, simultaneously holding the Miss Gay Missouri and Miss Gay St. Louis titles. She'll be performing a vamped-up version of the number that clinched the Missouri crown for her in April, a drag interpretation of the music of Mary Poppins.

While the judges won't convey any hometown advantage, she knows the crowd's enthusiasm will buoy her spirits.

"I feel really confident," she says a few weeks before the pageant. "Barring me falling down, I think I have a pretty good shot."

The 2018 Miss Gay America, Deva Station of Columbus, Ohio, will be ending her reign and passing the crown to the next winner. After seven years of competing, it will be hard to crown the new winner.

"It's been the year of a lifetime," Station says.

In her role managing the qualifying pageants, Station says she's really enjoyed connecting with competitors and hearing about their lives during interviews.

"I don't think that you truly realize until you have become Miss Gay America what people say in their interviews," Station says. "Their struggles, why they chose to do drag. Maybe they're hiding, maybe it's an escape. I got to look inside all these peoples' diaries! It makes you not sweat the little things. People have really conquered some demons."

That's true in Station's case, too. Her drag name references the rough spot she was in when she began performing in her late 30s.

"I never considered myself to be the most beautiful or the most talented, but I was the most passionate," says Station. "I've told people before the irony in all this: Dressing up as a woman and going onstage and playing a character taught me how to be a man."

Miss Gay America 2018 will host preliminary nights on October 3 and 4, with the revue show on October 5 and the winner crowned on October 6. The first three nights are at Hamburger Mary's (400 Washington Avenue, 314-833-4000), and the final night is in the Ferrara Theatre at America's Center (701 Convention Plaza, 314-421-1023). For ticketing info, see missgayamerica.com.

Editor's note: A previous version of this story contained incorrect credits for two photos. The photo of Lady Gaga is courtesy of the Miss Gay America pageant. The photo of Miss Gay North Carolina America 2015 Vivian Vaughn is by D.j. Bonet V’lentino & After Six Photography Studios. We regret the errors.