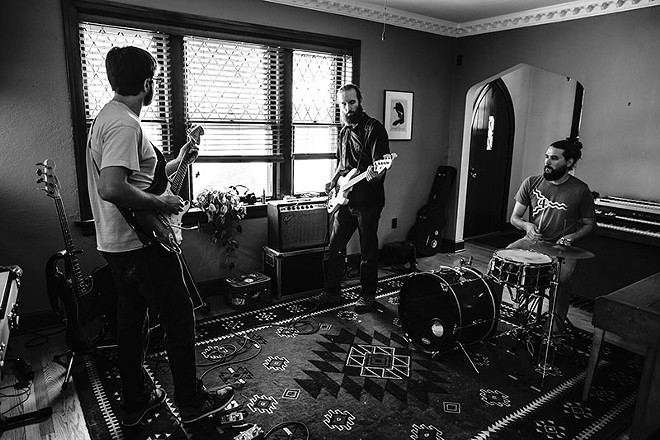 When Webster Groves native Mikey Wehling left St. Louis to study music at North Texas University in Denton, his education didn't come just from the faculty. While the guitarist does recall "being beat down mercilessly by people who knew a whole lot more than me" as part of his formation, it was the record collections shared and dissected by his classmates that offered an alternate pathway to musical wisdom.

Over rainy-afternoon drinks at the Tick Tock Tavern in Tower Grove East, the 35-year-old Wehling talks about his experiences and influences as he discusses Vandeventer, his new trio, which just released its debut EP Trainyards and Graveyards. After leaving Denton and returning to St. Louis, Wehling was part of the six-headed jam/fusion hydra Messy Jiverson, a group whose reach extended well beyond the tie-dyed, noodle-dancing scene normally associated with instrumental, exploratory acts.

After that band's dissolution, Wehling formed the Reverbs in 2011, which initially released quick-hit instrumental grooves but gradually expanded to encompass fully fleshed-out songs that leaned heavily on jazz-rock smoothness and Wehling's own high tenor vocals. The Reverbs' final album, Looking for an Echo, paved the way for Vandeventer's formation.

"With the Looking for an Echo record I wanted to go back to a band feel and pay homage to those '70s records that I was a big fan of — Steely Dan and Grateful Dead and that stuff," says Wehling. "It feels like this record is a nice combination of the funky, Donald Byrd vibe of Messy [Jiverson] with that Reverbs influence of Steely Dan and Fleetwood Mac. I was able for the first time to put all that stuff under one canopy. It all makes sense to me, at least."

The core trio finds Wehling on guitar and occasional vocals, Mike Schurk on drums, and Nate Carpenter on bass. Carpenter and Wehling first played together in Messy Jiverson, though with Carpenter handling organ and synth duties. This EP marks his first time instead handing bass detail on a recording, a move that happens to include a bittersweet passing of the torch.

"Unfortunately he lost his father about two years ago, and he had been a bass player," says Wehling of Carpenter. "He let me know that his dad had left him his bass, and he said, 'Hell yeah, I'm down.' He used his dad's bass and we started playing some songs."

On Trainyards, Vandeventer picks up where the Reverbs left off, with a mix of groove-based instrumentals that reference various strands of classic rock tradition and a few vocally driven songs that showcase Wehling's impressionistic lyrics alongside tight musicianship. Wehling takes "Paints and Paper" as an example of the band's various influences — from his jazz-conservatory training to his diverse record collection.

"It started with a poor-man's homage to Nigerian stuff at the top, as far as a white-guy south city vibe with that, and then we ended up with this middle section that kind of has a Mahavishnu [Orchestra] vibe to it," explains Wehling. "That last section to us sounded like a lot of '70s rock & roll, like a KSHE Klassic, and in particular that section reminded me of Nate's dad and the kind of blues vibe. I think it's a pretty good summation of where I've gone and been as a guitar player."

So how did Vandeventer, a relatively short south city surface road with dubious pronunciation, come to inspire this trio?

"It started when a friend and I went to see Sleater-Kinney," he says. "I hadn't listened to them since I lived in Portland and we used to gig in Olympia a lot, and the exit for Evergreen State is Sleater-Kinney. I told my friend it's just the name of the exit for the college — she had no idea. I said it would be like naming your band 'Vandeventer' or something. And that was it."

"Outside of St. Louis you wouldn't have any idea what that word meant," Wehling continues, "and here it's kind of a 'so St. Louis' vibe."

If the band name acts as a kind of shibboleth, some of the song titles are similarly referential, from the "Life During Wartime"-like vibe of opening track "Southside" to the sticky, hard-plucking stoner funk of "The Arena" — named, presumably, for the old barn on Oakland Avenue that hosted no shortage of Blues games and hard rock concerts. Wehling was inspired to title the song and album "Trainyards and Graveyards" after his weekly trips to Lemay's Nottleman Music, where he teaches lessons. He recalls feeling hemmed in by one or the other as he drove up Lemay Ferry from his south city abode.

"It's life on the south side," says Wehling of the album's title. "You are either moving forward or backward, or you aren't going anywhere."