As Ray Charles, Jamie Foxx turns an ordinary bio into an extraordinary one 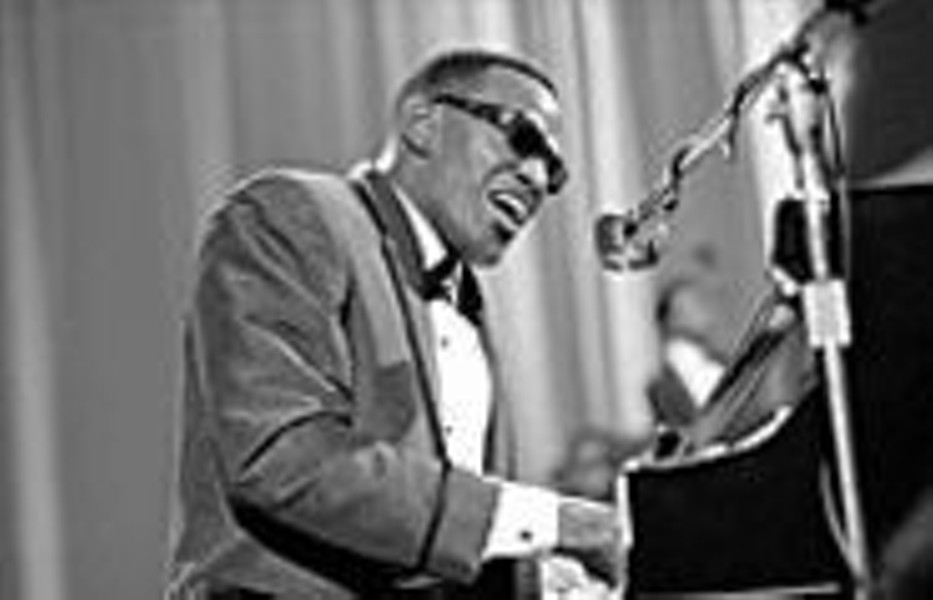 Nicola Goode On top of the world: Jamie Foxx becomes Ray Charles in this standout performance.

Ray, director Taylor Hackford's fifteen-years-in-the-making biography of Ray Charles, begins as you might hope: with 1959's "What'd I Say (Part 1)" pulsing on the soundtrack, the organ's low moans building toward that familiar, funky frenzy. It almost serves as an early climax, a bracing thrill served up before a word of dialogue has been delivered. The song, which will resurface later in the movie as Charles (played by Jamie Foxx) composes it on the spot to fill a night's worth of entertainment, is the highest high note available to a director trying to hit the low notes, too, of which there were many in the life of one of pop music's most beloved sons-of-a-bitch. Soon enough the toes stop tapping, and the easy smile engendered by a timeless R&B single fades; the echo dissipates into a more melancholy, melodramatic song about a blind kid from Greenville, Florida, who does bad things but grins his way through to the other side.

Charles himself never shied away from the awful truth. His 1978 autobiography, Brother Ray (co-written with David Ritz), tells all and hides nothing, from Charles' serial infidelities ("If a chick wants to get with me, and I want to get with her, we'll work it out") to his smack habit ("I was hip to drugs from every angle") to his being an infamous skinflint. Curse words were dropped casually; so, too, were admissions of guilt over hitting women and ruining his marriage and ditching drugs only when jail time loomed. Such dark revelations ran counter to the grinning, amiable façade Charles proffered onstage, surrounded by the string sections and backup singers that ladled syrup on the bitterness beneath.

Were it not for the performance of Foxx, the movie, which touches every base and slows to a crawl near home plate, would sink even when the score soars. (Hackford uses the original records, and Ray's soundtrack plays like a greatest-hits comp, from the early jumpin'-jive of "Mess Around" to the Atlantic soul to the ABC corn.) But Foxx transcends the movie, to the point of elevating it beyond its status as conventional biopic told conventionally. His is less impression than inhabitation, a complete submersion of the actor into the character till you forget they're two separate people.

Hackford loves his subject, the iconoclast who became an influence who became an institution, and doesn't necessarily apologize for him. Ray doesn't skimp on the sordid tales of how he nearly missed the birth of his son because he was in bed with another woman, or how he mistreated longtime friends and bandmates when money was involved, nor does it give short shrift to the music that made him immortal: his heroic fusion of blues and gospel, forays into country and big-band bop, and fondness for saccharine ballads. But Hackford, in his square and eventually overlong biography that's far better to listen to than to look at, lets Charles off the hook more than Brother Ray did himself. Hackford almost suggests that Charles was allowed his indiscretions because he was traumatized as a child (when he was five, Ray witnessed his younger brother George drown in a wash tub; he lost his sight shortly after to undiagnosed glaucoma) and lionized as an adult. The art, in Hackford's presentation of James White's screenplay, makes up for the artist's flaws; we forgive because of what he gave and gave up.

The women in the cast are uniformly astonishing, especially Regina King as Margie Hendricks, the Raelette who let Ray into her bed, and Kerry Washington as Della, the wife Charles treated like an afterthought. Most notable of all is first-timer Sharon Warren as Aretha Robinson, Ray's mother and the woman who would never let her boy's blindness stand in his way; the scene in which she forces Ray to fend for himself in the darkness, despite every maternal instinct to guide her son, is overwhelming.

One huge problem with Ray is that it doesn't feel real; it possesses the slick, sterile artifice of a 1980s made-for-TV movie. People here don't talk the way they do in real life. Every key moment in Charles' career is marked by someone informing him that, wow, yeah, this is a key moment in his career. "Nobody's ever combined R&B and gospel," says Atlantic's Ahmet Ertegun (Curtis Armstrong), during Charles' early days on the label. "You're onto something big here." It happens repeatedly, as though Hackford feels compelled to remind his audience of Charles' significance. And every event in his life is marked by the birth of a song: After he beds Della, Ray jumps to the piano to play "I've Got a Woman"; a breakup with Hendricks leads right into "Hit the Road, Jack"; and so on, to the point where you might believe Charles was as autobiographical a performer as, say, Joni Mitchell.

Ultimately, though, you will forgive Ray its flaws because of Foxx. He's so good, he'll convince you the movie is too. Whether he's swaying at the keyboards or screwing around on Della with Margie or some other roadkill, Foxx brings to the affair what Hackford occasionally would prefer to leave behind -- the anger and the callousness, the ruthlessness and the bitterness, the cunning behind the charm. If only the movie contained half as much life as Foxx, it would be something truly remarkable -- a movie with soul, rather than one merely about it.