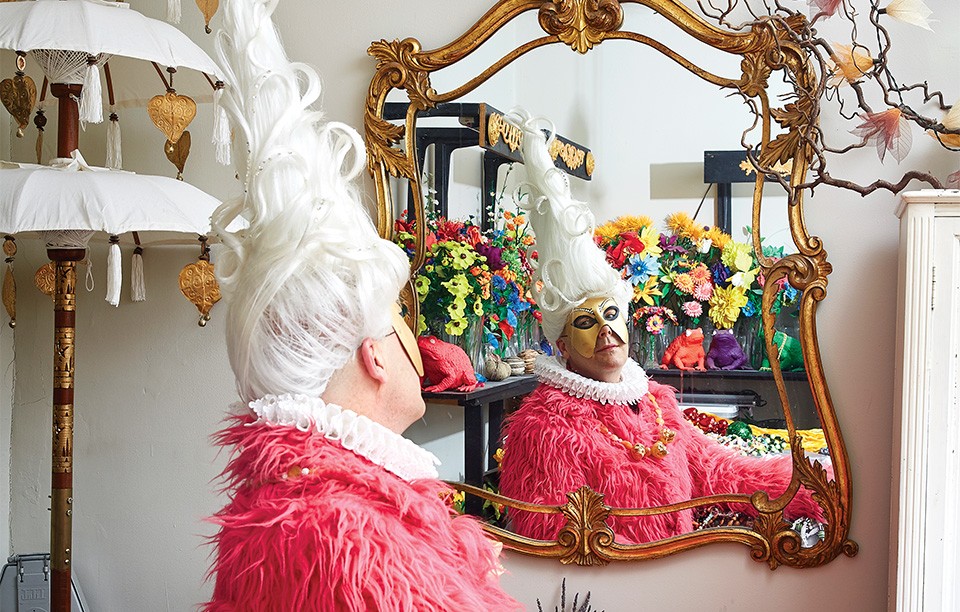 Auntie M's real name is Matthew Traeger, and convincing him to let me use it here was an easier task than getting him to reveal his age, which even I am not sure of. "Those details are only known to me and Madonna's plastic surgeon, so let's just say I'm solidly Gen X territory," he says.

He lives in a flat overlooking the Missouri Botanical Garden with a yoga mat in the living room and a bed in the very center of the bedroom surrounded by a garden of blacklight-illuminated glow-in-the-dark flowers. Everything in between those two rooms — dining room, kitchen, hallway — is a warehouse of beads, wigs, hats, mannequin parts and sundry insane items. Unlike his age, I know about his day job, but he doesn't want me to say much about it. It doesn't have anything to do with beads.

He went through several artistic incarnations before settling on beads. The first time Auntie M attended Soulard Mardi Gras, for instance, he was adorned in recycled artificial flowers spray-painted in Day-Glo colors. At the time there was a popular nighttime Mardi Gras parade, and his group of similarly adorned marchers followed a golf cart topped with a blacklight spotlight.

He became interested in beads after buying strands, and thinking about how much more fun and interesting they could be. Also, he saw people literally risk their lives for them. "I've seen people run and grab throw beads from between the wheels of tractor trailers in the parade. I've seen them pick up beads that were on horse shit. I mean, if people are willing to debase themselves for beads, give them something worthwhile," he says.

If I had to use pop-culture references to describe Auntie M, I'd say he's part Dr. Frasier Crane and part Roger the Alien. He's almost hypnotic in his speaking style, very even and measured, although when amused he is prone to let out a hearty cackle. I've never once seen him frazzled, hurried or even distracted. Each word is thought out.

Auntie M scours the globe for beads, and when he finds something truly unique he buys in bulk — and I mean bulk. "A giant Brooklyn warehouse was being liquidated and they had all these beads from West Germany, so they'd been sitting in boxes for decades," he says. Rubbing his finger over one kitschy German bead that looked to be from the '60s, he explains how the beads have no seam, which is unusual. He spent $10,000 to acquire all they had.

The babies he uses in his beads are manufactured for use on baby shower cakes. He orders them in bulk from a bakery supplier and then drills holes through them. "Mardi Gras is so white, not just in St. Louis either, so I began with black baby beads to celebrate diversity, and then came out with the interracial baby beads — and nothing compares to the excited reaction when I give those to an interracial couple."

He patronizes bead stores in San Francisco, Seattle and Houston. The golden penises are imported from France. "The French just have that aesthetic down," he says. He has a favorite supplier in China. "When you open the bags these come in it smells like a toxic waste dump," Auntie M says of the gorgeous absinthe green Chinese beads. "The air quality is so bad in the industrial province where they're made. I set them in my hallway to air out for a few days when I get them. I'm sure my neighbors love me."

Sometimes beads do not cost money. That was the case at the 2002 Burning Man festival, which Auntie M attended wearing a kimono-style ensemble custom-made from metallic organza fabric by Marie Oberkirsch, an artist in Old North.

"There was this domed Arabian tent where you could create your own jewelry and the price was taking a photo wearing what you made," Auntie M recalls.

That leads to another memory, one from the Burning Man festival: "I had that billowy outfit on with a golden Italian-made mask and a headpiece from Bali, a golden ornate thing, and I was sitting in the actual effigy. That year it was all about gods and deities, and the base of the effigy had these alcoves you were supposed to sit and pretend like you're a deity, and a nerdy white couple came up and presented me with an offering of beautiful glass beads and a little bracelet, and in return I gave them one of my own strands, and as I'm handing it to them it busted apart and fell into a cloud of dust."

In the moment, Auntie M just laughed, thinking what an appropriate comment on impermanence it was, being at that ephemeral festival in the desert. "But they didn't seem to see it that way, and they just kind of wandered away with devastated looks on their faces."

And then there's New Orleans, a city so awash in beads they clog the sewer system. During his annual pilgrimage to march in its numerous parades, Auntie M collects the most intriguing krewe beads thrown on the streets there, takes them apart and incorporates the krewe emblems into his works.

Not every supply source is so exotic. Locally, he enjoys the fine selection at Carnival Supply and Schaefer's Hobby, and he's even slummed it at (shudder) Hobby Lobby when it's had some insane sale on disco-ball ornaments.

And then there's Bass Pro. "You go past the kettle corn and all these people getting geared up to go out and kill animals, and I'm looking for tackle boxes for my beads and fishing line to string them," he says. "As far as the fishing line, I've found that 30-pound test has enough of a resistance to give the strand some shape. It's like Bass Pro is my Michael's Annex."

Auntie M feels a great deal of camaraderie with the seasoned bead traders he encounters.

"There are die-hard Mardi Gras people who are really into trading really good beads. Oftentimes it's an older lady that looks part Kentucky Derby and part hooker and has so many beads they take on the form of a life preserver. Some will even zip-tie their favorites together to make sure they don't trade those," Auntie M explains.

"They talk to you about them — every strand has a story. Some are handmade, some you can't find anymore and sometimes they are wearing beads I made. One had this incredible strand containing a miniature rubber chicken. I had to sweeten the deal a bit to make that trade."

After obtaining the rubber-chicken beads, Auntie M engaged with a group of nondescript people with really basic signs, like "Have Fun," preparing to walk in the parade.

"Can I walk with you?" he asked them. "I'm handing out beads." They consulted with one another and agreed. Halfway through the parade he realized they were Scientologists.