Mauled to Death by a Pit Bull, Adonis Reddick Was Still Nobody's Victim

COURTESY THE ARC OF THE UNITED STATES Adonis Reddick, left, in a moment of victory. 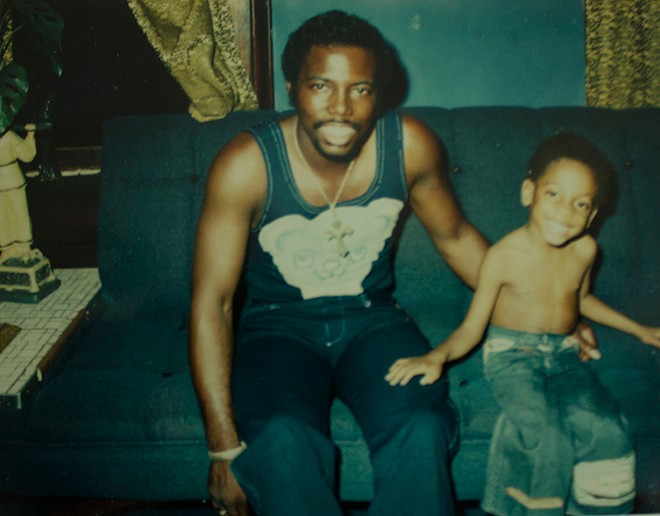 As a younger man, Aaron Reddick was so fascinated by Greek mythology he named his firstborn after a god.

He chose Adonis, a being so beautiful he sparked a battle between two goddesses. (A second son is named for the hero Achilles.) The child arrived on November 20, 1970, and true to his namesake, he was a beautiful boy with deep eyes framed by long, delicate lashes. "What women would call 'bedroom eyes,'" the father says.

But there is a darker side to the myth of Adonis. In one version of the story, Adonis' lover begs him to stop hunting because it was too dangerous and she could not bear to lose him. He ignored her advice — and was eventually killed by a wild boar.

Little Adonis Reddick had his own struggle. Not long after his son's birth, Aaron noticed a knot on the boy's back. He didn't know exactly what was wrong, but Adonis spent his first ten days in a special unit at Cardinal Glennon Children's Hospital.

"All I could do was look at him through glass," the 70-year-old says.

Cerebral palsy — a neurological disorder that affects muscle control and balance — was less-known back then, and all they could tell the Reddicks was that their son was what was known colloquially as a "blue baby." Aaron and his then-wife, Alice, were eventually sent home and told to exercise the little boy's legs. It wasn't until they saw a specialist that they learned about the cerebral palsy, Aaron says.

Doctors now know that people with cerebral palsy can often expect a life span similar to the general population. It's essentially a one-time brain injury, meaning it's not going to get progressively worse. The physical effects might be severe. They might not. Some people might suffer debilitating cognitive problems. Some, like Adonis, might grow up to whip you in chess.

But in the early 1970s, the prognosis the specialist gave Aaron was dire: His son would probably never walk or leave his parents' care. He might not live past fifteen years old.

"To me, it was like someone took a dull knife and stabbed me in the chest," the father says.

The boy's development lagged behind that of other kids. He was small for his age. His feet turned inward, causing his legs to "scissor" when he tried to walk. And his tongue caught in his mouth, garbling his words.

But his father, a former Army engineer who retired from the old Chrysler assembly plant, also noticed a ferocity in his tiny son. He thinks now of the surgeries Adonis endured as a child in hopes of improving the function of his legs. The pain was obviously excruciating, but the boy refused to show it.

"To keep me from seeing him cry, he would bite his lip," Aaron says. "The courage of this child ... "

Other kids began to notice it, too. Sheldon Mitchell, who grew up with Adonis, remembers childhood wrestling matches. At first, the other kids took it easy on him, only to find themselves pinned flat on their backs. Distracted by his spindly legs, they'd failed to notice his powerful hands.

"He would always win," Mitchell says. "He had the upper body strength we didn't have."

The boys didn't realize it at the time, but Adonis was already sharpening the weapons he'd use the rest of his life. A stranger's underestimation was leverage. Audacity was power. Willpower was king.

"I remember one day we were riding," Mitchell says. "He said, 'People look at me like I have a disability, but I'm fine. Everyone else has a disability.'"

It was a mentality Adonis understood intuitively and saw echoed by his family's tough love.

Aaron was known to throw people out of his house, even relatives, if he caught them carrying his son instead of making the boy walk. Adonis' maternal grandmother kept a chair for him at her house, teaching him to push it across the floor to build up his legs. He hated it at first, but he soon was shoving it around the house like a tiny football player pushing a sled. If he needed something out of a cabinet, he had to move his little chair over, climb up and get it himself.

The Reddicks divorced before Adonis was ten, and within a few years, the boy went to live with his father in De Soto. In his house, life was won by those who battled.

"Always remember," Aaron would tell his son, "the world is a hungry lion out there to devour you."