Compared to the cliffhanger contrivances of Gravity and the loony smorgasbord of theoretical physics that was Interstellar, The Martian — this year's entry in award-season science fiction — is refreshingly straightforward. Which is surprising, given that it is directed by the normally heavy-handed Ridley Scott, director of Alien, Blade Runner and more recently, Prometheus.

Based on the best-selling novel by Andy Weir (which I haven't read), The Martian is a minimalist film that reins in Scott's tendency toward self-importance and balances it with a pulpier, lighter approach to character.

Astronaut/botanist Mark Watney (Matt Damon) is part of a NASA mission exploring Mars. Left behind and believed dead when his crewmates are forced to make an emergency exit, Watney develops a potato garden to provide food and begins keeping a video journal of his progress while waiting for the next manned mission to arrive. (Watney appears to have been partly based on Canadian astronaut Chris Hadfield, who made a series of charmingly self-effacing videos from the International Space Station in 2013.) After various setbacks threaten Watney's survival, the film becomes a three-sided story, divided unevenly between the stranded astronaut, the crew at NASA who eventually realize that he has survived, and his former teammates, now on a space ship returning to Earth.

Adapted by Drew Goddard (who directed the rather silly horror pastiche The Cabin in the Woods), the script effectively combines the kind of soporific space opera Scott has made before and a more casual, human drama. The Martian balances the spectacular and the intimate, as well as the techno-babble of the NASA crew and the almost too casual levity of Watney (who, when his projects are going well, likes to point out that he's the very best on the planet as what he does). 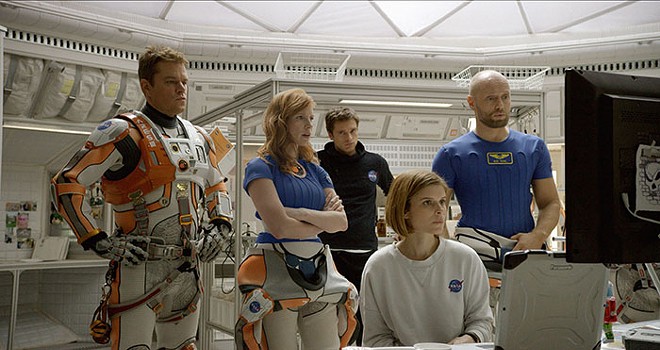 The best parts of The Martian are those devoted to Watney's solitary struggle, determinedly moving equipment or going through the repetitive procedures and drudgery of outer-space living. Even when the folks at NASA realize that their lost astronaut is still alive, Scott wisely limits showing much of their communication with him, understanding that it would lessen our sense of Watney's isolation and persistence.

Meanwhile, the earthbound scientists and technicians — Jeff Daniels, Chiwetel Ejiofor, Sean Bean and Kristen Wiig, among them — are by comparison sometimes absurd and almost stereotypical (and in one case, you can remove the qualifying "almost"), running around doing nothing in particular with great urgency. At best, their endless discussions of protocols and budgets and deadlines function as an ironic reflection of Watney's self sufficiency. While Scott seems to feel more of an affinity for the earthlings, he's also careful to keep the dialogue between the astronauts — and between Watney and the Mars landscape — from turning into TV-cute banter. (It may just be to the presence of Daniels, but it sometimes feels like the folks at NASA are waiting for Aaron Sorkin dialogue to kick in).

For all of its virtues, The Martian is weirdly uneven. As one might expect from a film balancing so many disparate elements, there are things that misfire, sometimes drastically. Many characters are barely sketched out, defined and identified only by whatever task they have to perform in each scene. Most of the scenes involving the rest of Watney's crew exist solely to add the strained here-we-are-stuck-in-space verbal sparring that Scott used in Alien and Prometheus, while scenes of Jessica Chastain and other astronauts rushing about the ship in zero gravity appear to have little purpose other than showing off the largely unnecessary 3-D.

A running joke about Watney listening to disco music — the only thing left behind by his team — falls flat, while two extended sequences edited to (predictably) "Space Oddity" and "Waterloo Sunset" are equally uninspired. Worst of all is the late appearance of a comic-relief math geek (Donald Glover) so embarrassing that I was reminded of the only other time I could recall Scott intentionally trying for humor: the dreadful stereotyped Rastafarian in Thelma & Louise.

But despite these missteps, The Martian succeeds on most levels. The scenes on Mars (actually filmed in Jordan) have a majestic simplicity to them. Combined with Damon's carefully understated performance and a story structured around hard science and practical problem-solving, The Martian turns its modest elements into cinematic strengths.