Marjorie Prime Is a Smart Sci-Fi Movie Without the Gizmos

COURTESY OF MONGREL MEDIA Walter (Jon Hamm) and his "wife" Marjorie (Lois Smith) talk about their shared past.

Marjorie Prime is part of a curious but unmistakeable trend, one of several recent films to examine the effects of aging (others include I, Daniel Blake, Aquarius, Toni Erdmann and A Quiet Passion). Is this simply another example of boomers being well into retirement age, yet refusing to release their grasp over the culture they've dominated for the last half a century?

That may be a part of it, but I don't think it's the whole story of Marjorie Prime, Michael Almereyda's new film adaptation of Jordan Harrison's 2015 play. (Harrison is only 40, therefore free of the boomer mark.) Aging is certainly an important part of the story, but it's also a way of raising many other questions: Are we the same person now that we were 20, 30 or 50 years ago? Is memory something we create, or is it who we are? How did we get here?

It begins like this: A man and a woman are having a quiet conversation, but something seems just a little off, a little uncanny. Marjorie (Lois Smith) is 86 years old; Walter (Jon Hamm) seems to be about half that age. He shows interest in the conversation, but there's also something reserved, as if he was carefully analyzing each statement. They talk about a shared life, about children who are now grown, and about how he proposed to her after they saw the 1997 film My Best Friend's Wedding.

It takes a few minutes to realize that Marjorie Prime takes place sometime in the middle of the 21st century — it looks contemporary, but there are subtle reveals in the production design — and that Marjorie is speaking to a computer program, a holographic reconstruction of her long-dead husband. 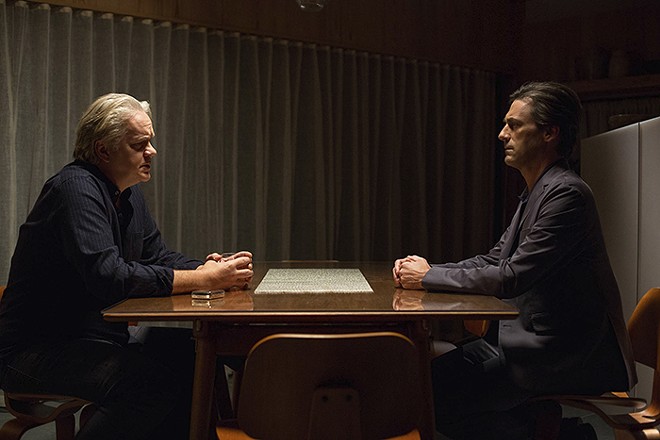 Marjorie Prime is science fiction in the purest sense. Without a trace of a spaceship, a lightsaber or a sandworm, it's a story about lives transformed by technology, about scientific innovations intertwined with emotions. Thoughtful, inventive and sometimes even a little creepy, it's a profound and disturbing examination of what it means to be human, of the things that make up our memories and how we, in turn, are remembered.

Hamm, who has never been better, plays a prime, an artificial intelligence program employed by Marjorie's family (daughter Geena Davis and her husband Tim Robbins) to keep the declining woman distracted or, at the very least, remind her to eat. A cross between Alexa and HAL 9000, Walter speaks 32 languages and can pull up just the right piece by Poulenc on the audio system. He's nearly perfect, but who is he? Formulated from an ever-increasing database of memories, a prime can be easily accepted by some characters, while others, especially Davis, find his presence unsettling. Is it the program she's reacting to, or is it the memories, the secrets of her family history given semi-human form?

Memory can be false, or at the very least misleading, and much of the startling strength of the film comes from the revelation that the things we accept as truth are elusive, subjective and malleable. This is perfect material for the underrated Almereyda, combining many of the themes of his earlier films — psychology, recording technology, theater — into one intricately structured story. There are no gimmicks to Almereyda's direction, no awkward concessions to (or contrived rejections of) his stage-confined source. He uses Harrison's text as a means to engage directly with his cast, filming them with a conversational intimacy. The viewer is soothed and engaged on a personal level, leading to an ingeniously clever and unexpected climax.

The first half of the film is a completely convincing family drama, centered on the always extraordinary Smith, who originated the role of Marjorie on stage. The second half expands the narrative in several directions and raises new questions about family history and identity. There is a brilliant, jarring moment midway through the film where Almereyda passes his camera over photographs of Smith taken over many decades. After having brought us so close to the elderly Marjorie, it's a small shock to see an unknown, younger version. In an instant, Almereyda pulls the rug out from under how we have seen and understood the woman, creating a visceral example of the film's message: the complex creation of the mind and the self.